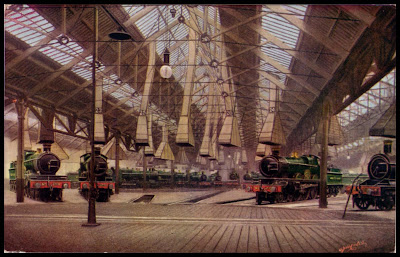 The name has a fine bucolic ring to it but the reality is a working locomotive depot designed to service the Great Western Railway main line in and out of Paddington. It sits on the south bank of the Grand Union Canal, north of Wormwood Scrubs in a kind of no-man’s-land between Acton and Harlesden. This splendid postcard shows the principal locomotive shed with its double turntable as it might have appeared in the early decades of the last century. It presents a rather sanitised vision of a place more normally seen through clouds of steam and smoke and the signature of F Moore tells us that it’s a hand coloured image based on a photographic original. (Follow this link to see a previous posting on the subject of F Moore, a fictitious railway artist.)

As a railway obsessed youth, I made more than a few pilgrimages to this sacred spot in Northwest London to observe the often pristine and beautifully polished products of Swindon Locomotive Works at rest in their natural habitat. It was a long but rewarding cycle ride from the pastoral suburbia of Metroland via Northwood, Harrow and Wembley to the coal dust, ashes and cinders of the balmy slopes of Old Oak Common. The primitive black and white photographs below display a catalogue of errors but they were taken by my teenage self on expeditions to Old Oak Common on May 6th. and October 15th. 1960 according to the careful pencil notes on the back of each one. Virtually all surviving traces of the Great Western Railway on the site will be erased to accommodate the notorious Crossrail project to connect Maidenhead with Shenfield by 2017. 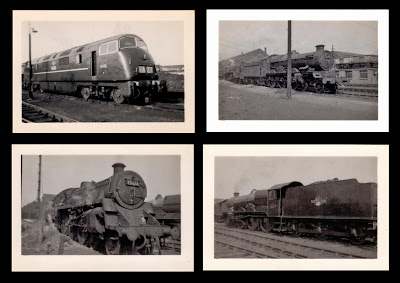