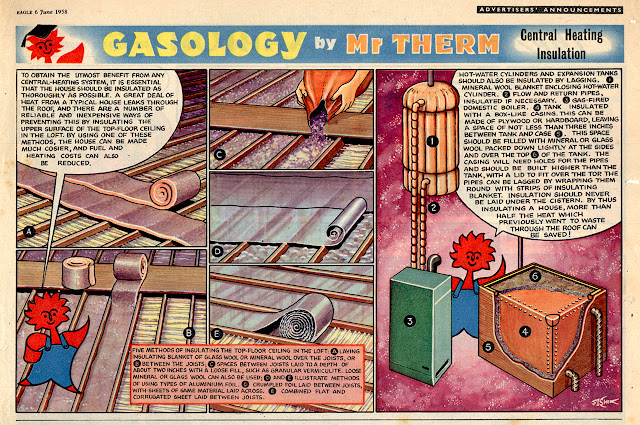 By the end of the 1950s a new era of affluence was dawning in Austerity Britain. New technologies and home improvements were actively embraced by a grateful populace. Despite being a little long in the tooth, Mr Therm (born 1931) was still doing his bit for the gas industry in the pages of the quintessentially middle class boys’ comic, The Eagle. It may seem like a doomed project to interest adolescent youth in the finer points of home insulation or transforming a hostess trolley but they were very different times. Ian Allan ABCs and I-SPY books offered genuine high-level distraction to youngsters for whom a fruit gum or a minute ice cream wafer that melted and collapsed in an instant was the ultimate in treats. Mr Therm’s adventures appear somewhat overloaded in didactic content and the entertainment value was nugatory despite the occasional lumbering attempts to inject some humour into the proceedings. For many years Mr Therm’s cheery contours had brightened up the exceedingly dull and stuffy world of British consumer advertising but he might have been expected to retire by this point – given the steady rise in Cold War nuclear paranoia in this period, he could well have been relaunched as Mr Thermo-Nuclear. As for his inventor the sober and industrious illustrator, Eric Fraser would dedicate his talents to the world of literature and performance and never again produce anything with the recognition value of Mr Therm. 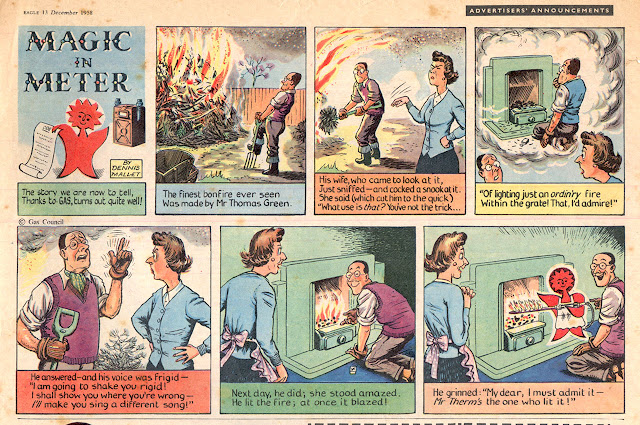 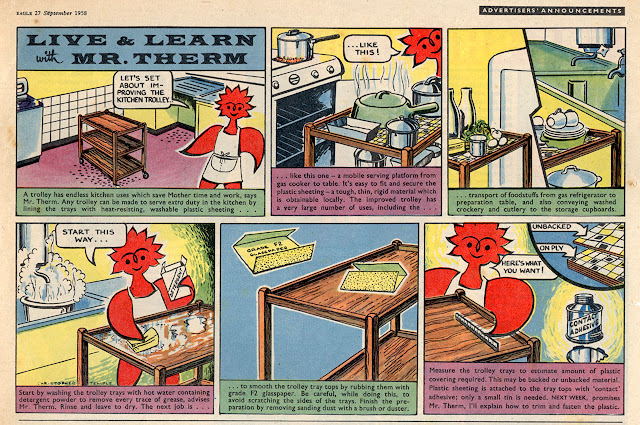 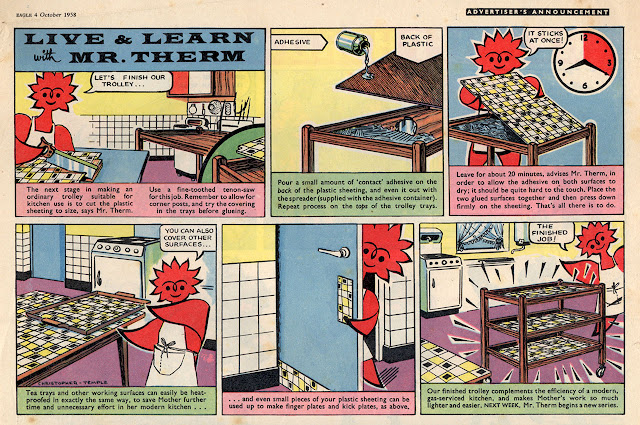 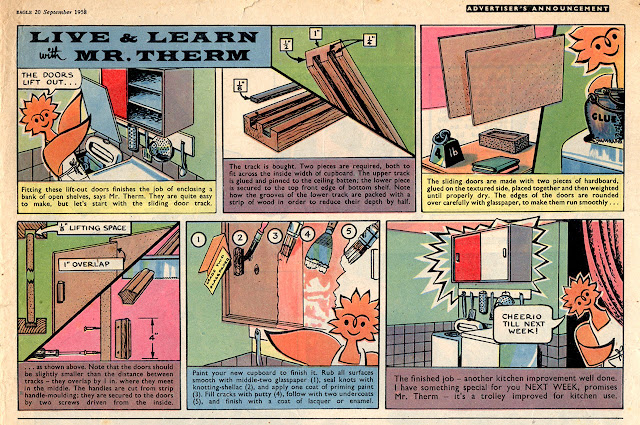 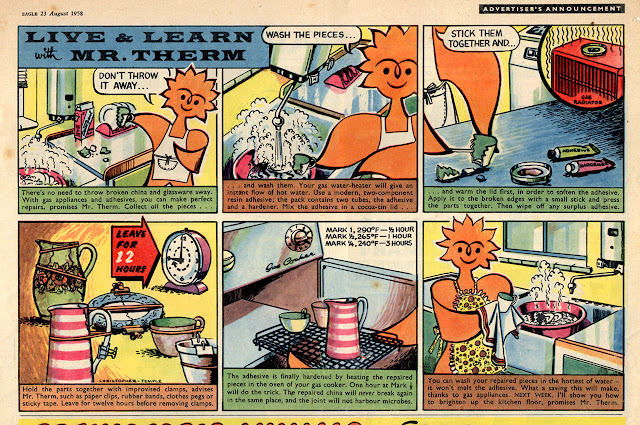 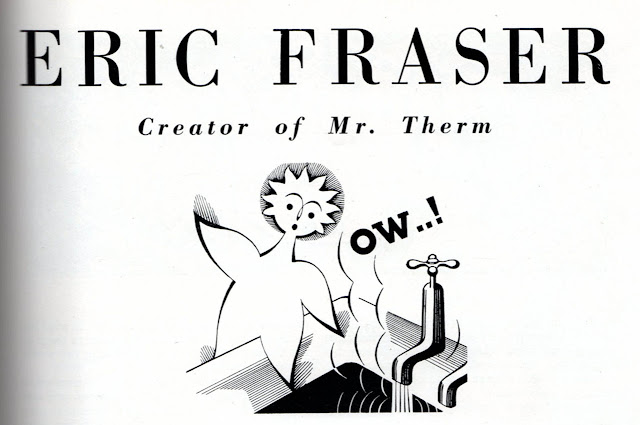 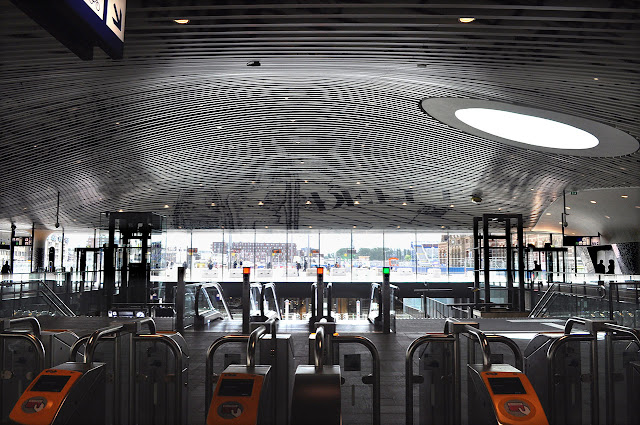 The new railway station in Delft opened on the last day of February 2015 after more than a decade of planning and construction that involved relocating the busy mainline between Rotterdam and Amsterdam from an elevated viaduct to a subterranean track. The new building also houses municipal offices and a new Delft City Hall. At street level it’s a large black and grey box with a gently chamfered roofline that diminishes the visual impact. The glazing features randomly alternating vertical panes of varying widths of high performance glass and moulded glass designed to evoke vintage glazing. Great care has been taken to avoid an oppressive appearance. 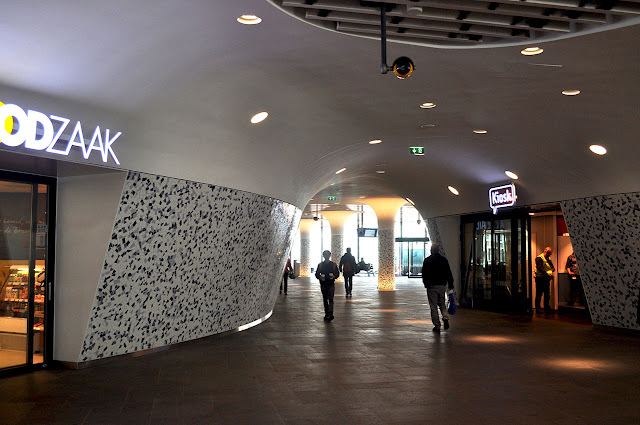 The interior has a cavernous and undulating feel. Under a vaulted ceiling lined with over 4000 baffles each bearing a narrow strip of imagery sliced out of an 1877 vintage map of Delft, a large central space has been carved out to allow banks of escalators and flights of steps that descend to the subterranean train platforms. Overhead light-wells supply dramatic illumination. Disappointingly, like Porta Sousa in Turin and Antwerpen Centraal where mainline trains run below ground in redeveloped stations, the platforms have a utilitarian feel and low light levels. 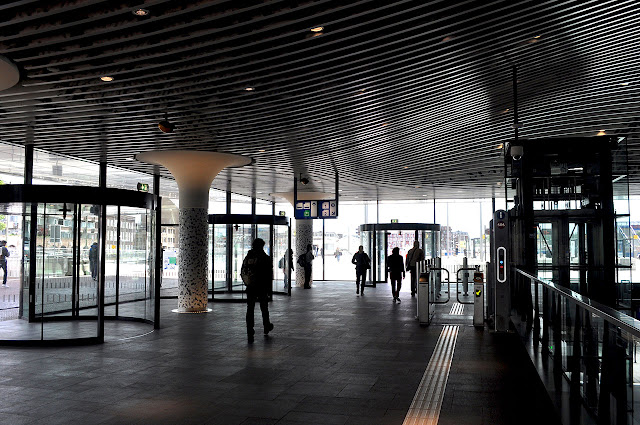 The design is the work of the Delft-based Mecanoo practice and replaces a building of 1885 that will be retained and re-used. The aim was to provide a station that offered the arriving traveller a view of Delft inspired by Vermeer’s painting – an enormous panorama of the city is revealed as the traveller turns toward the exit after arriving at ground level. Walls and columns are lined with a mosaic of ceramic fragments in shades of Delft-blue – the standard of finish is immaculate. Cafés and retail units are discreet and built into the fabric of the building – there are no free-standing kiosks or advertising displays. The result is a spacious but not intimidating station concourse that restores a measure of dignity to the travelling public by not exploiting them as a revenue stream ripe for extraction. The scale of this project is formidable and it’s very difficult to conceive of something comparable happening in Britain in a town the size of Woking or Watford. 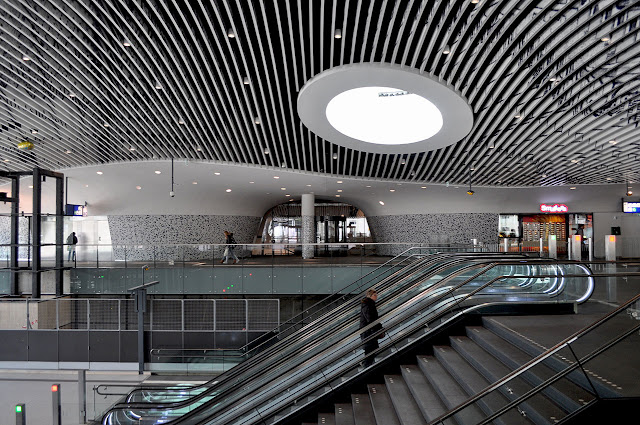 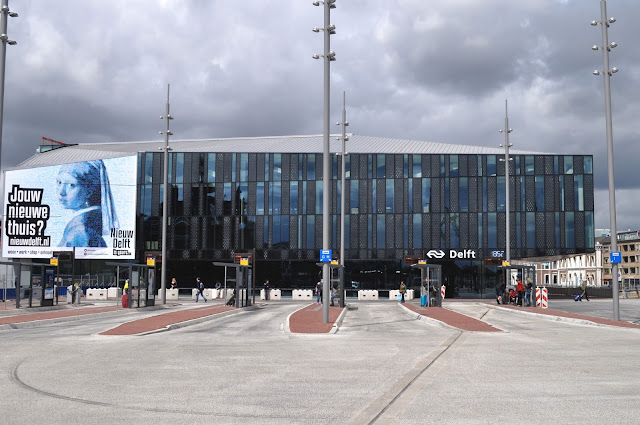 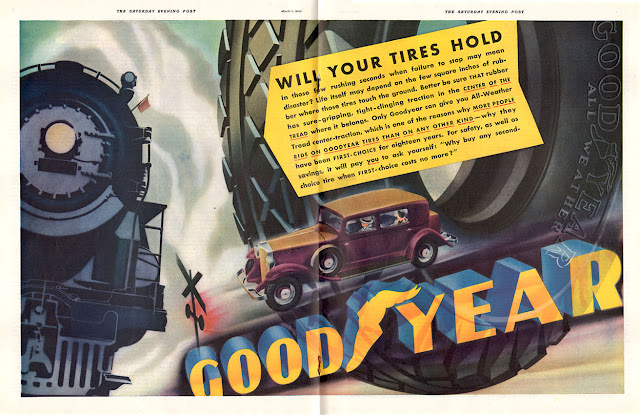 Much of this selection of advertising art from the 20s and 30s could be labelled Art Deco but the term is so elusive to define that it can be cheerfully applied to all sorts of unworthy imagery. If I must offer a definition I favour the claims of graphic art that exploits the decorative potential in Cubist and Futurist painting to command attention. Visually fragmented imagery, repetition of forms and smooth tonal transitions all offered novel ways in which products could be transformed in appearance and presented through a prism of modernity. The Goodyear ad employs a Cubist-inspired reorganization of pictorial space and scale to dramatise the perils of driving with inferior tyres. Sweeping streamline forms and dynamic representations of speed were rapidly absorbed by some advertisers and then just as quickly abandoned in favour of more conservative forms. Another strand that appears here descends from the fashion illustrations of Paul Iribe, Erté et al that inspired a multitude of insipid and mediocre imitations. Spidery drawings of limp female forms trapped in an infinity of serpentine but meaningless curves. 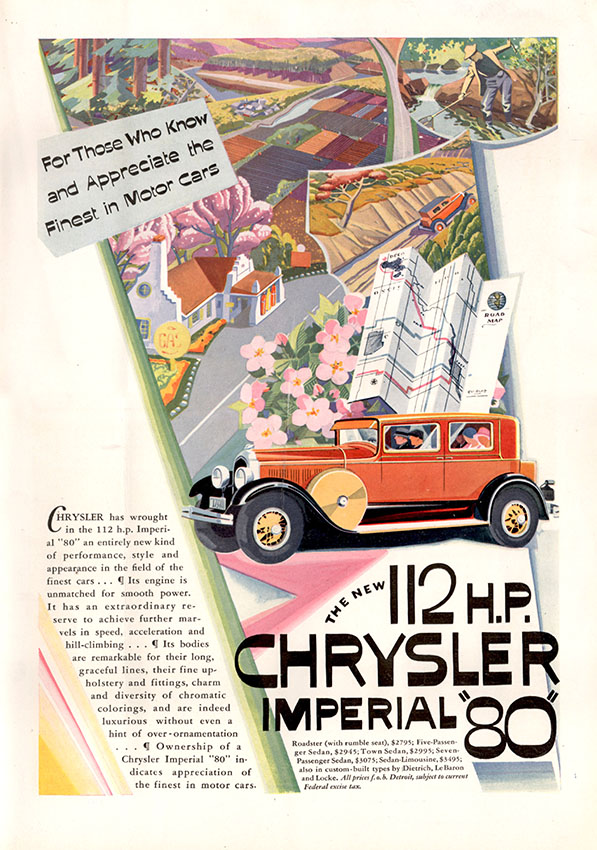 These examples come almost exclusively from mass-circulation mainstream magazines that rarely explored the frontiers of visual culture that might challenge their readers’ inbuilt caution. It appears that for a few years in the late 20s and early 30s sophisticated art editors with a liking for European Modernism experimented with public taste by introducing elements of Art Deco into mass-market advertising. Some of these pictorial devices such as the radiant light sunburst motif would have an extended life but for the most part the Deco influence was brief. The growing influence of market researchers and the impact of the Depression favoured less adventurous imagery. In a hardscrabble economy where consumers were struggling with falling incomes and mass unemployment advertisers reverted to more basic methods of grabbing attention – what Roland Marchand described as “Advertising in Overalls”. 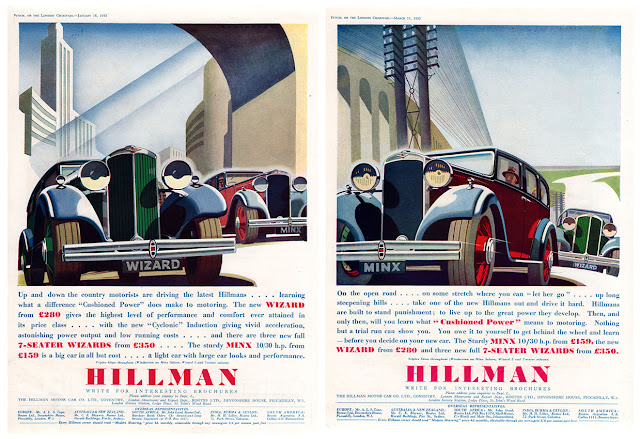 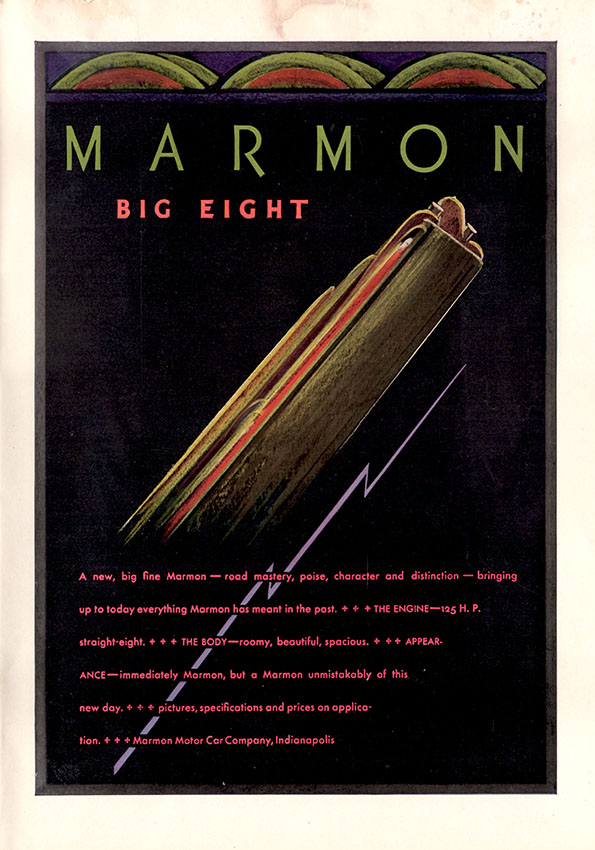 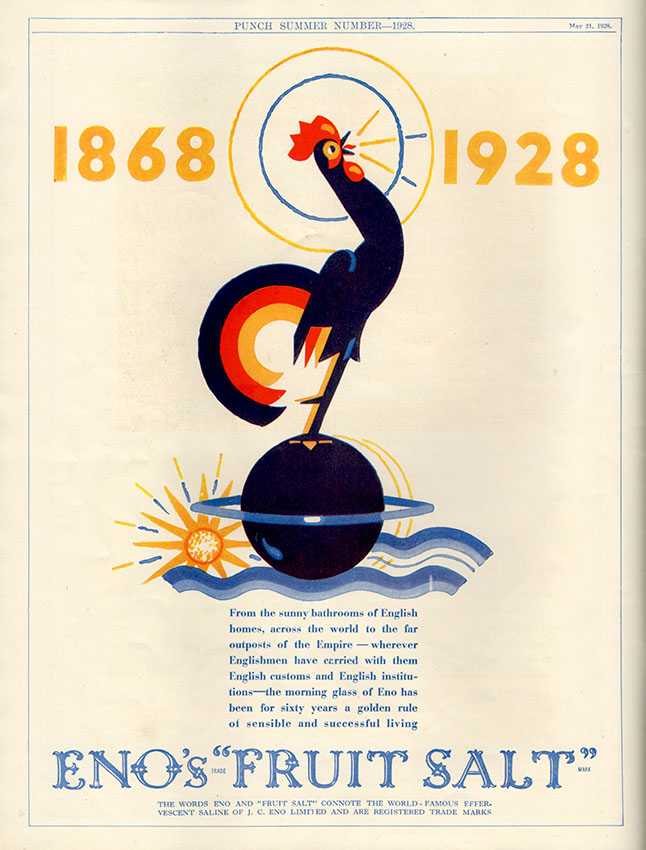 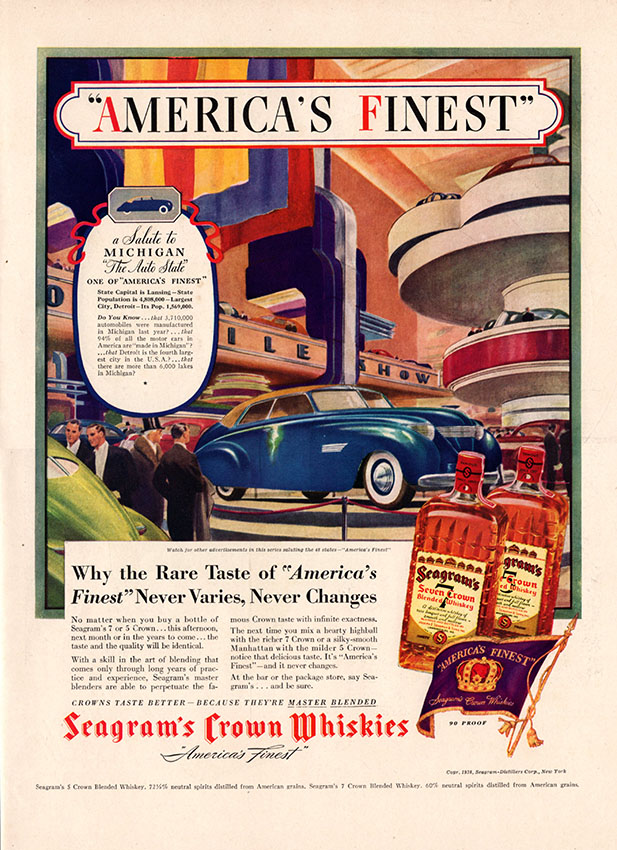 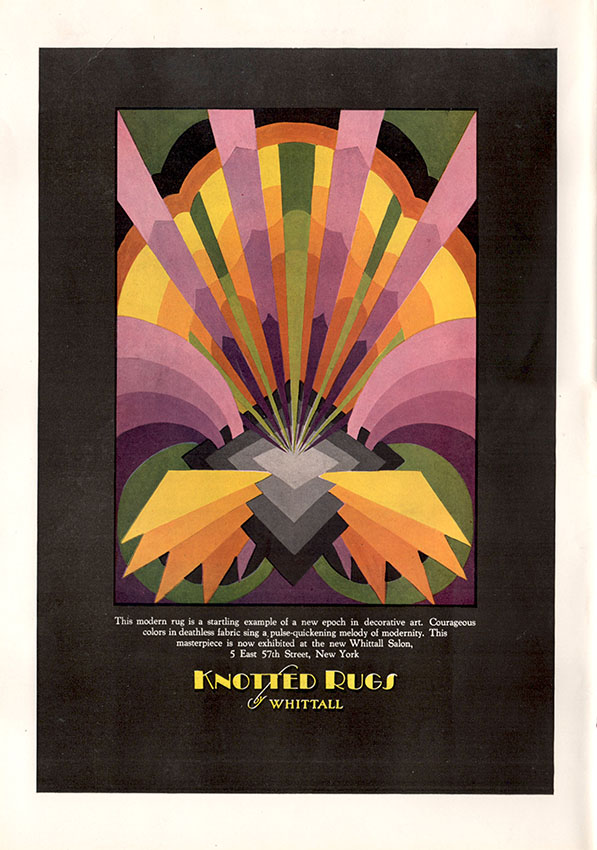 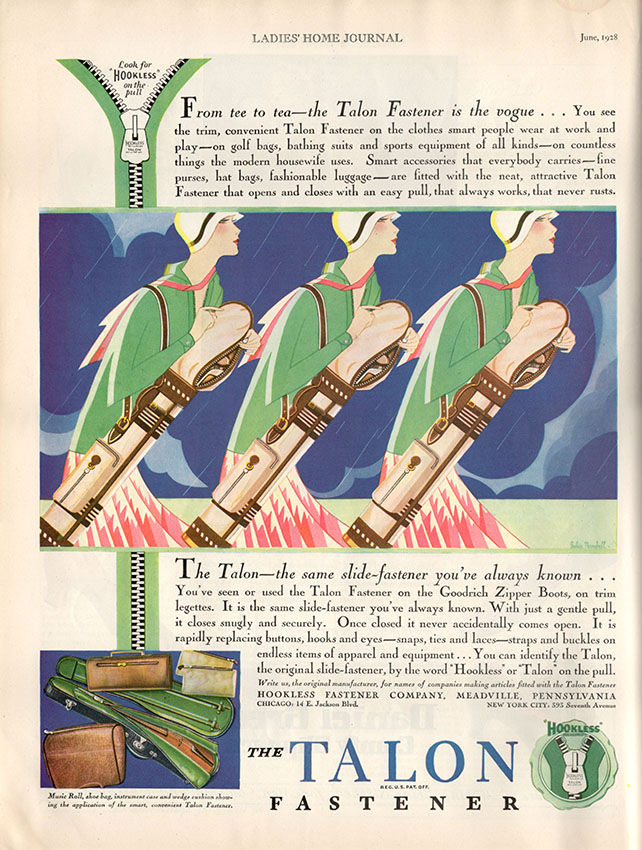 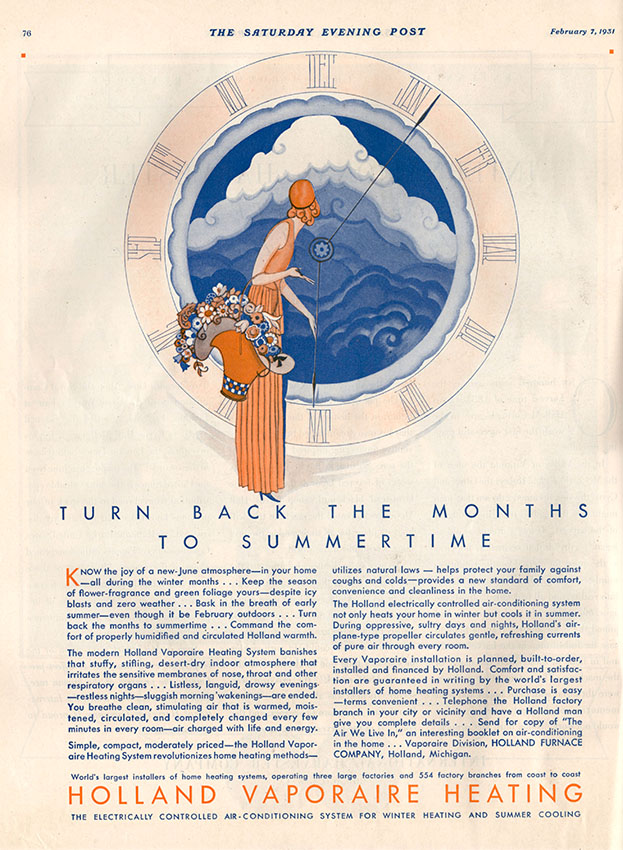 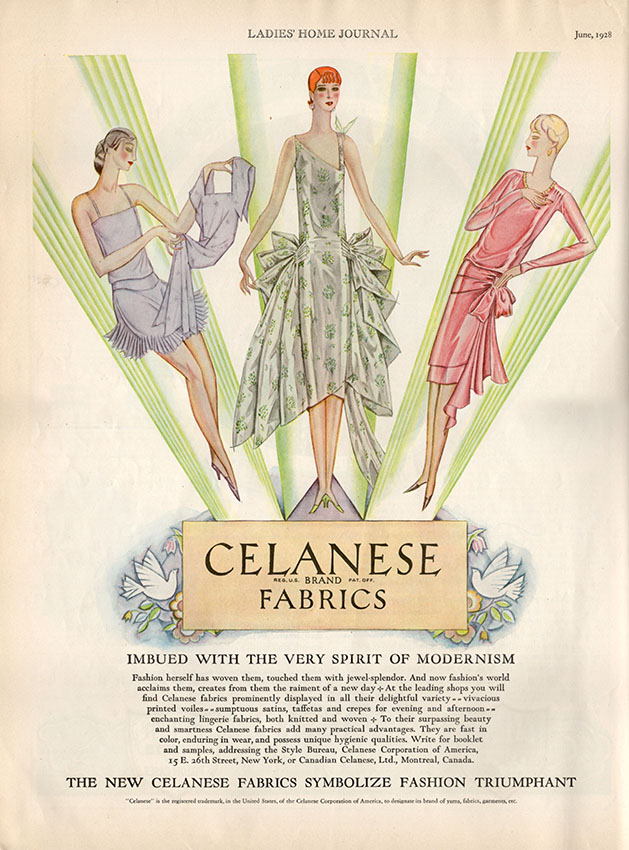 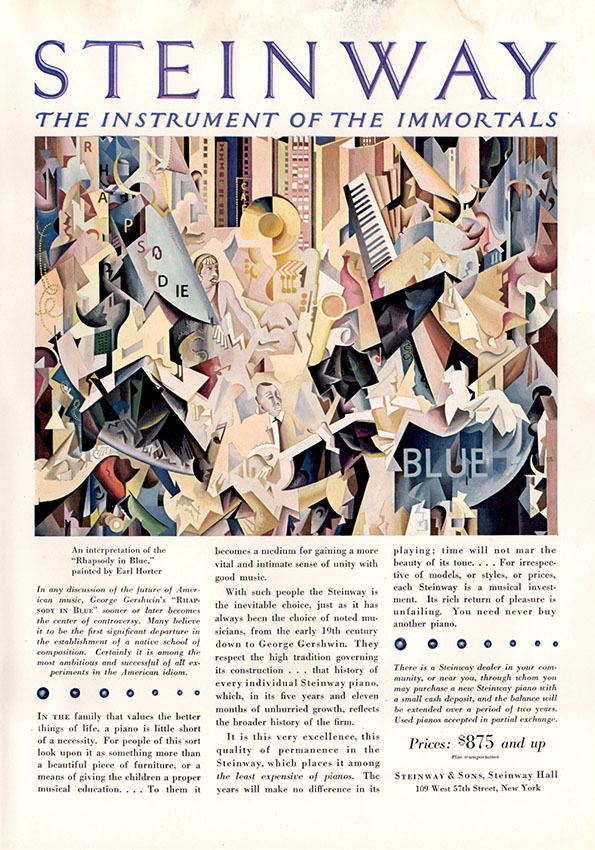 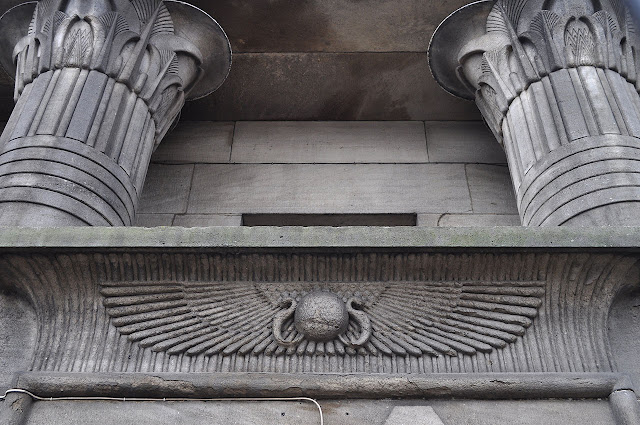 Temple Mills in Leeds is a precariously placed survivor of England’s brief love affair with all things Egyptian. When the John Marshall company planned the construction of a new flax mill adjacent to their existing premises (built between 1791 and 1831) it was decided to build in the fashionable Egyptian style to add prestige to the project. The services of the much travelled painter David Roberts were sought to advise on authenticity and the final design produced by Joseph Bonomi the Younger was based on the Temple of Horus at Edfu. The result was a muscular frontage with extraordinary presence behind which was a two acre factory floor, illuminated by circular sky-lights in a ceiling supported by slender columns. The roof was originally turfed over to supply grazing for a flock of sheep. To overcome the inability on the part of sheep to climb steps a hydraulic lift was installed. There’s no documentary record of the story that a sheep fell through a skylight fatally injuring a worker below but for whatever reason the grazing experiment was short lived. 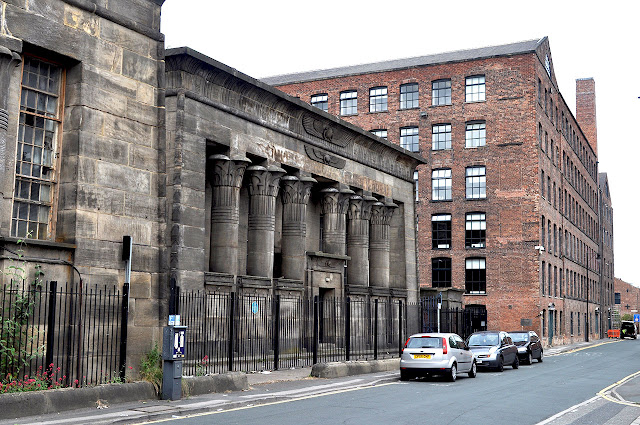 This is a serious minded effort to reproduce Egyptian architectural forms and very different from the playful polychromatic freestyle approach seen in the Egyptian House in Penzance or the Odd Fellows Hall in Devonport. The application of colour did come under consideration and Bonomi produced colour drawings but it seems to have been seen as a step too far. The client, Marshall wrote, “To an English eye the painting of the exterior walls appears a very bold step; I hardly know whether we shall screw up our courage to do that.” (Quoted from p.273 of Egypt in England, Chris Elliott, 2012) 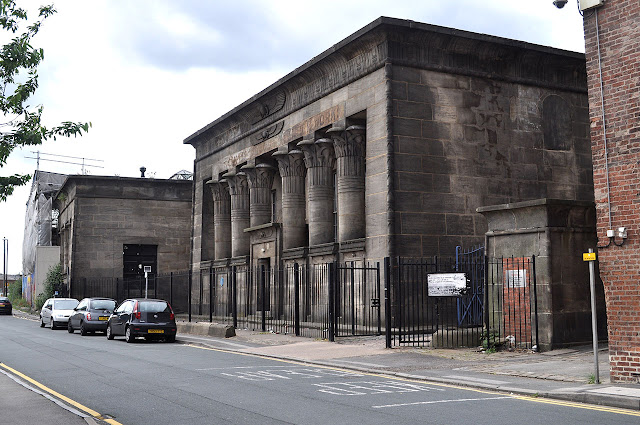 The building is in use as an occasional cultural event space but the overall condition is very poor. More than a third of the frontage is supported by scaffolding and shrouded in plastic sheeting and there are no signs of any work in progress. Only the office block can still be seen as originally built. Despite a Grade I listing for many years the mill has featured on lists of buildings at risk and as yet there appears to be no fully funded plan to restore the fabric of the building and find a viable future use. 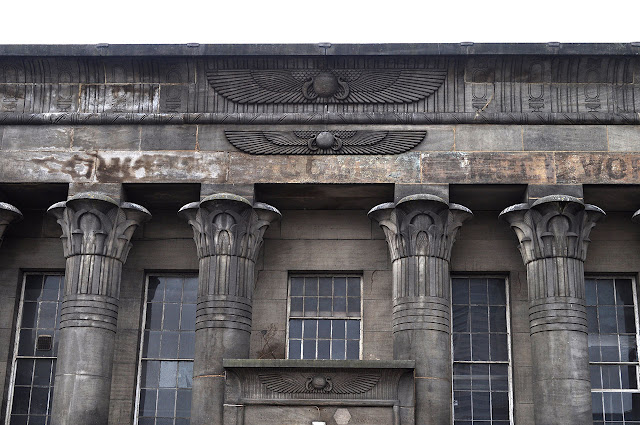 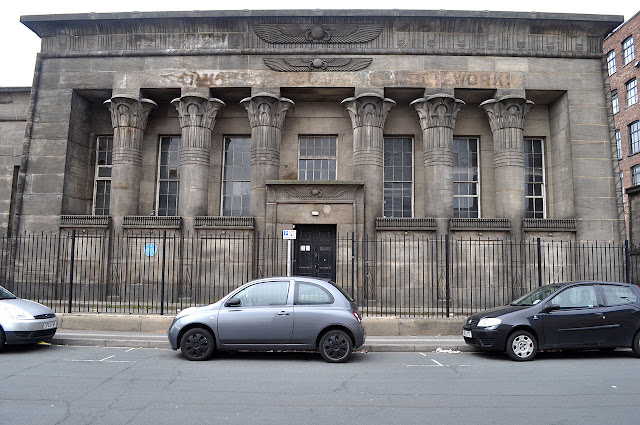