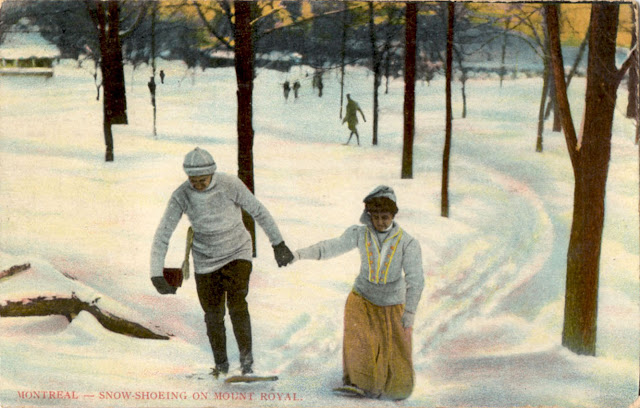 For the last ten days or so, the nation’s weather forecasters have been addressing us in their self important faux-demotic on the subject of snow. In ever more apocalyptic terms we have been warned to expect unprecedented extremes of freezing temperatures and snowfall. If it was their intention to induce fear and dread, their success is demonstrated by reports of panic-buying of basic foods and supplies. TV newsgatherers have been out and about in the snow covered uplands in anticipation of blood curdling tales of human suffering – you can sense their disappointment when their interviewees respond with stoic acceptance of the tribulations of winter. In the meantime, the red tops have reworked the weather event as The Beast from the East in a phrase that neatly evokes the national paranoia over immigration that has poisoned political discourse in recent years. As a reminder that winter hardship was, and remains so for many, a routine event, we offer a selection of vintage postcards from winters past. To see some illustrations of snow scenes posted in 2010, please follow this link. 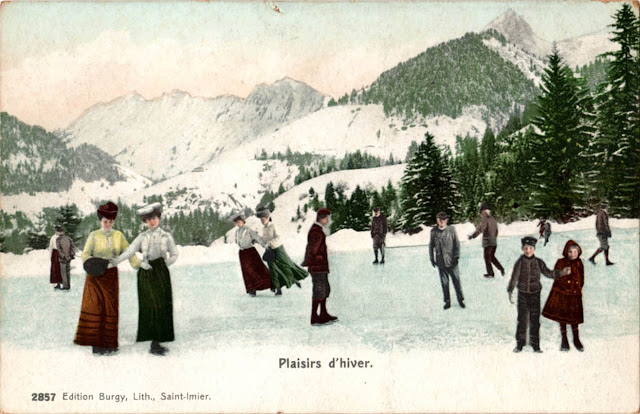 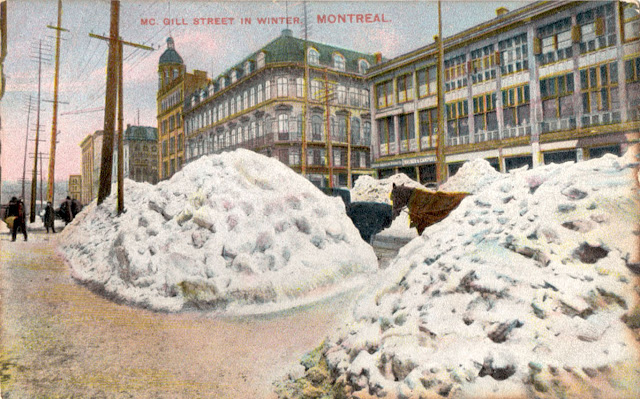 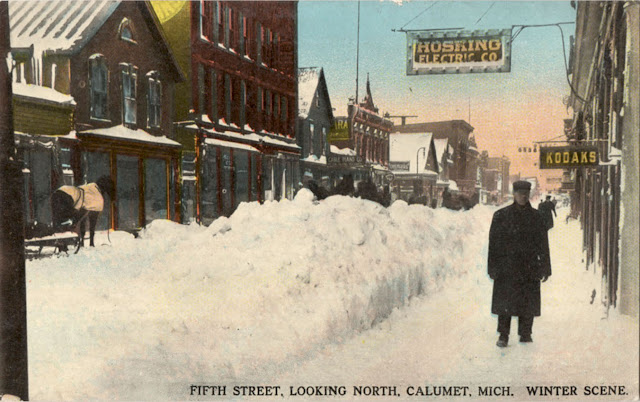 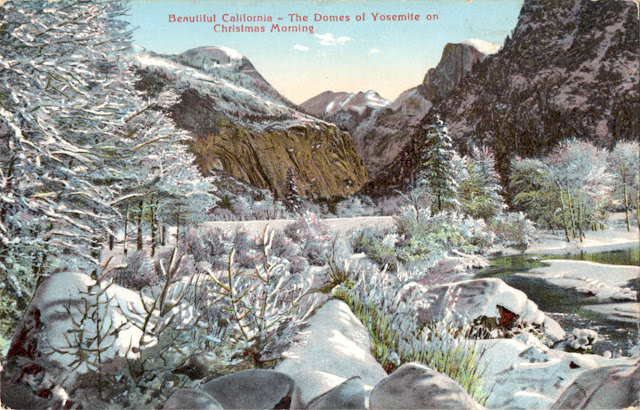 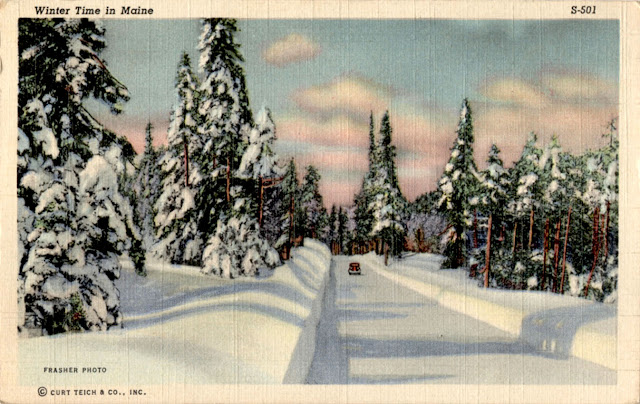 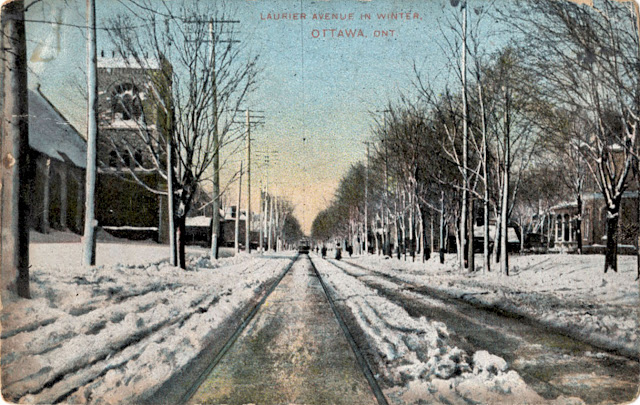 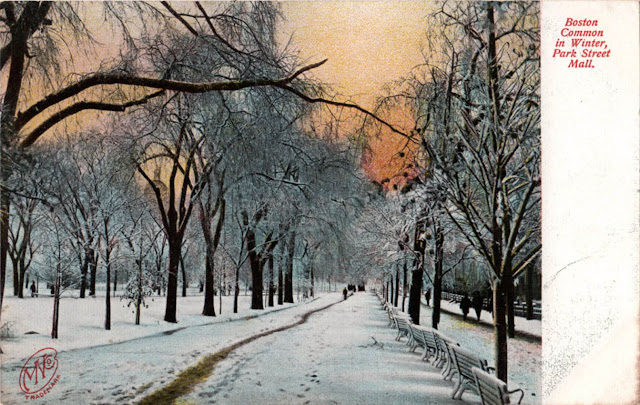 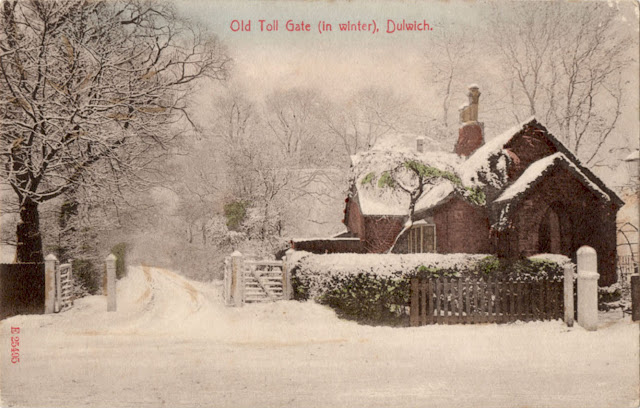 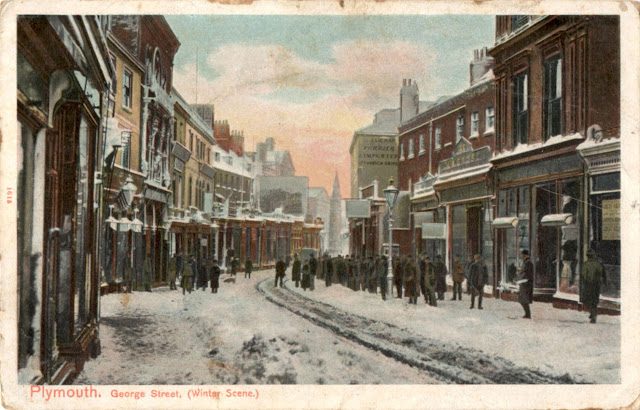 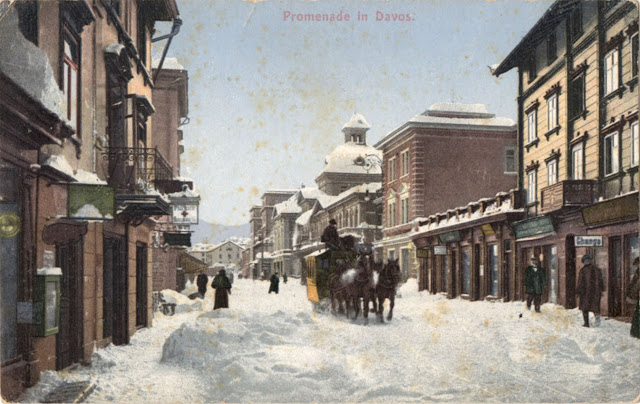 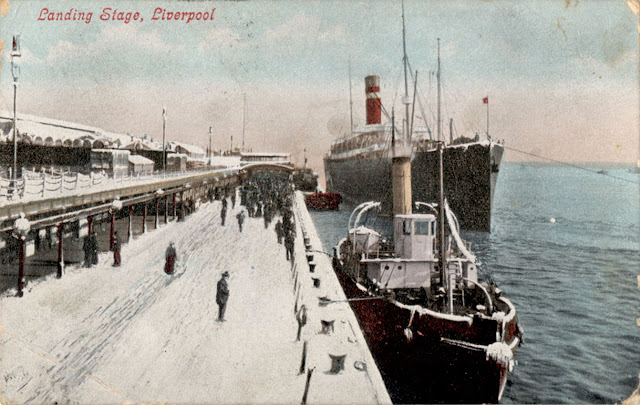 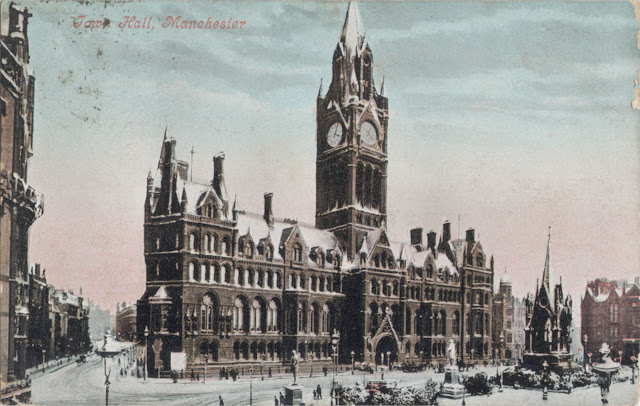 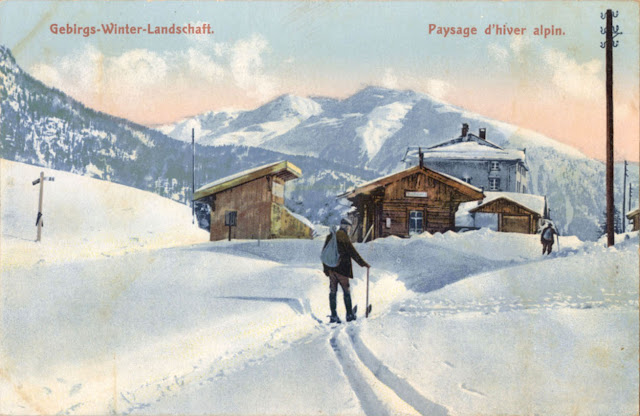 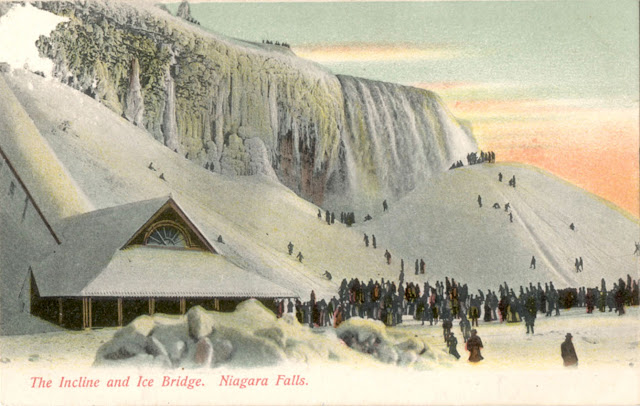 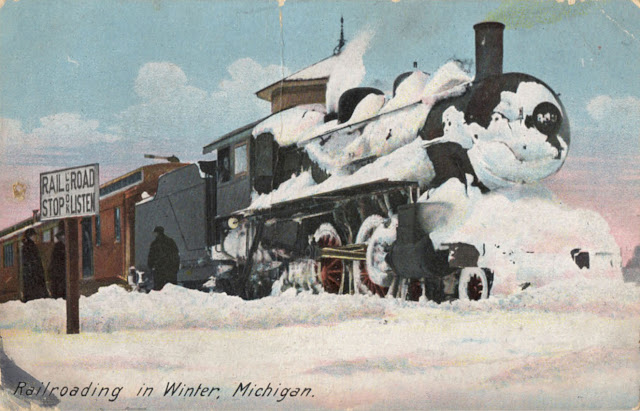 Posted by Phil Beard at Wednesday, February 28, 2018 No comments: 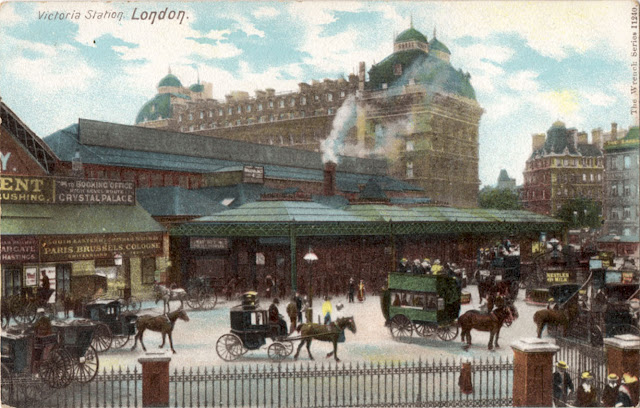 When this postcard was published, Victoria Station comprised two separate termini operated by different companies. The modest, low-rise building pictured here was built by the London Brighton & South Coast Railway (LB&SCR) in 1860. To the left, out of the picture, was the station for the London, Chatham & Dover Railway (LC&DR). Looming over the station is the Grosvenor Hotel (1861) – a view that would be lost a few years later when a six-storey red brick and Portland stone building was planted on top. Designed by Charles Morgan, Chief Engineer to the LB&SCR, in typically bombastic Edwardian Baroque styling, it was completed in 1908. It survives to the present under the protection of a Grade II listing from Historic England. 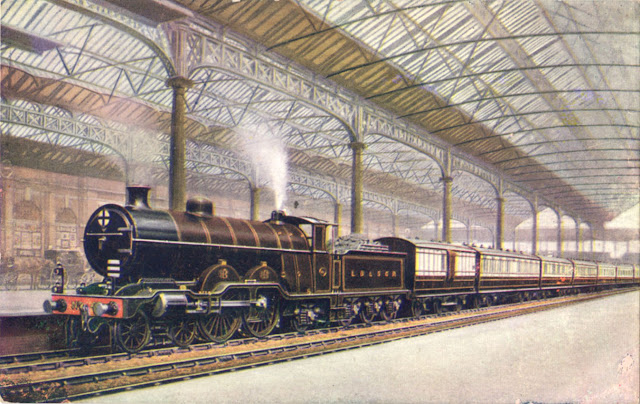 The second postcard shows the singular glory of Victoria Station – the slender, lofty and elegant wrought iron train shed built in 1862. It flooded the platforms with much needed daylight at a time when locomotive smoke and steam would have filled the atmosphere. The extra height allowed for dispersion of some of the worst effects. Sir John Fowler, former chief engineer of the Metropolitan Railway was responsible for the design. Fowler was a remarkable and prolific engineer who would go on to design the Forth Railway Bridge (together with Benjamin Baker). The train is a Brighton express from 1908 behind an H1 Atlantic locomotive, one of 5 constructed in 1905-6. 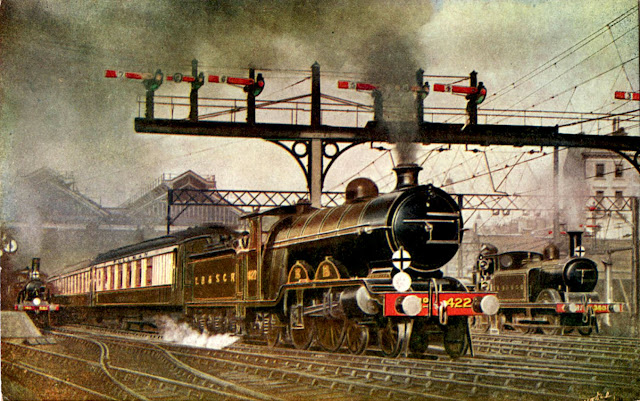 In the third postcard we see the departure of the Brighton Pullman, storming under the signal gantry outside Victoria Station. This time the locomotive is an LB&SCR H2 Atlantic built in 1911 that later carried the name, North Foreland. The train most famously associated with Victoria Station was the London to Paris service, marketed as the Golden Arrow and the subject of the final card as seen in the era of British Railways. 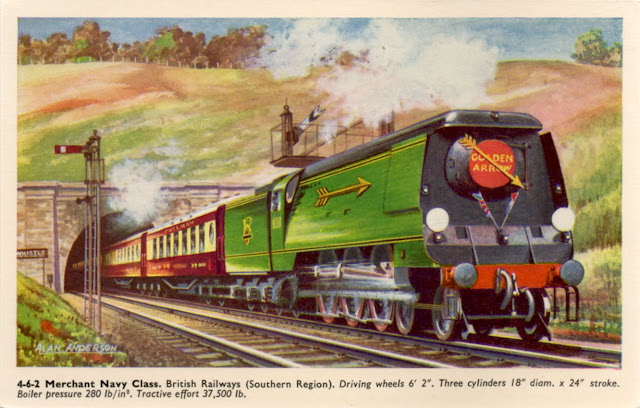 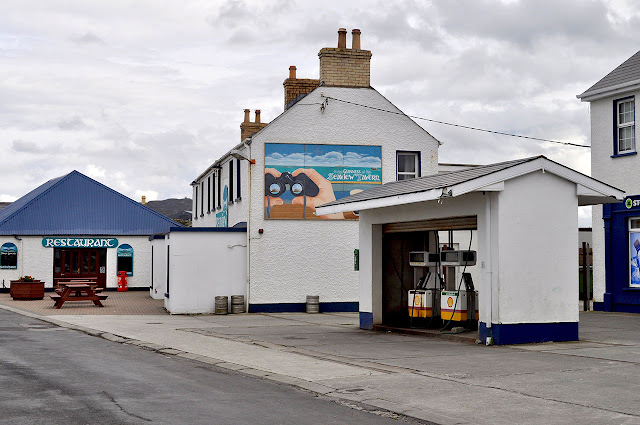 Above is a photo from 2010 of the Seaview Tavern at Malin Head in County Donegal. It is described as the most northerly Bar, Restaurant and Guesthouse complex in Ireland. Below is a photo from 2017 showing O'Sullivans at Crookhaven, County Cork - serving the most southerly pint in Ireland. The third photo is Creedons at Top of Coom on the border of Cork and Kerry. This claims to be Ireland's Highest Pub at 1,046 feet above sea level – there are other claimants to this distinction but none of them are over 1,000 feet. The spartan appearance follows a fire in 2012 – as a result the entire pub had to be rebuilt. All that remains is to locate Ireland’s Lowest Pub. 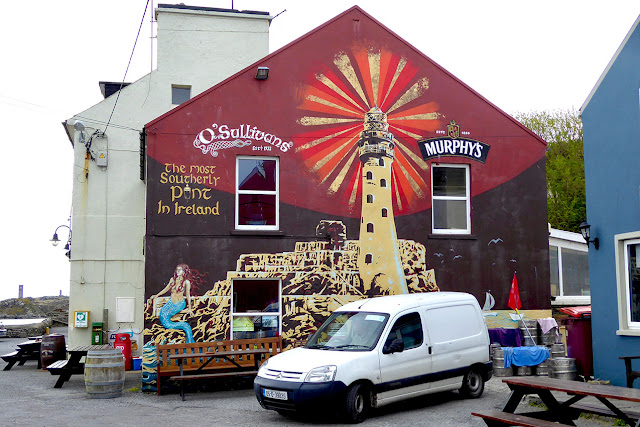 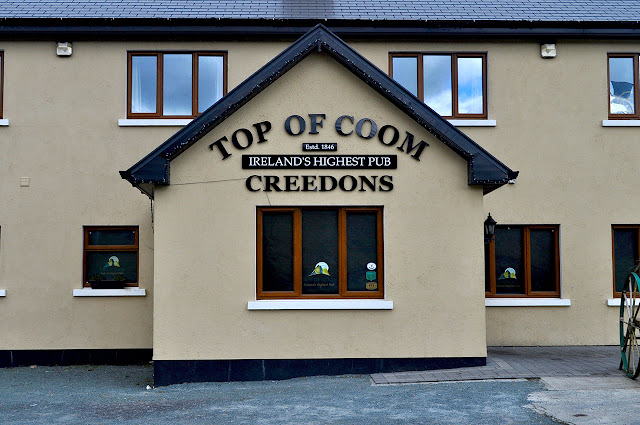 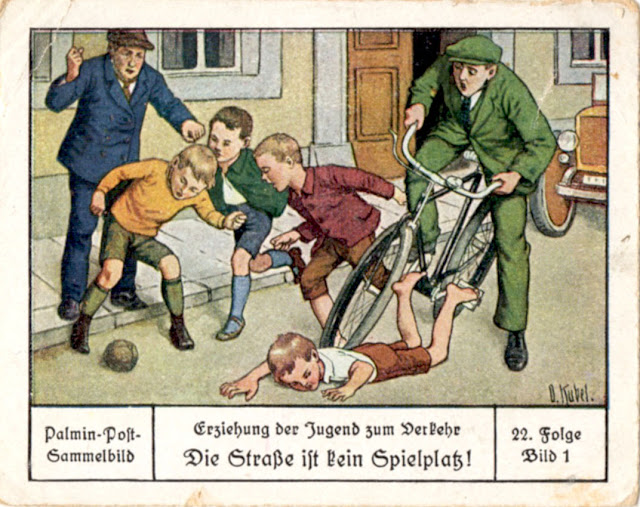 Another series of trade cards issued by Palmin, manufacturers of coconut oil products – this time from the 1920s on the subject of children and road safety. An interesting group of scenarios featuring careless children and reckless road users - also a demonstration of corporate social responsibility on the part of business. Anything more than a marginal impact on human behaviour would appear unlikely but nobody could disagree with objective of improving public safety. Vulnerable youngsters in parlous situations are frequently depicted on these cards and reflect parental anxieties common to all cultures. Although the illustrator has thrown the unfortunate victims in all directions, care has been taken to avoid upsetting the audience with excessively graphic content. Follow this link for more hazards to children. 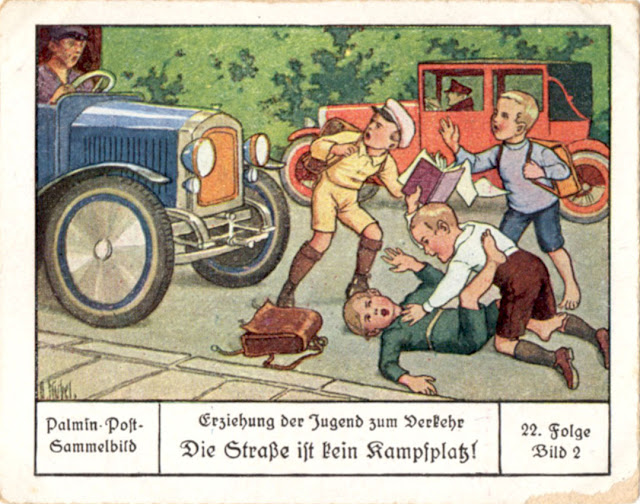 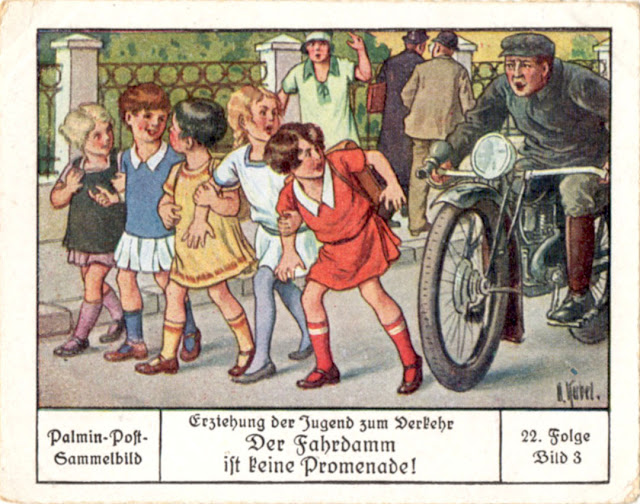 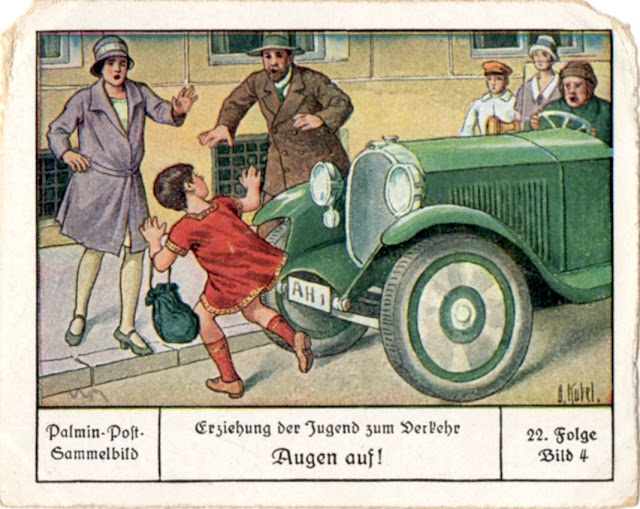 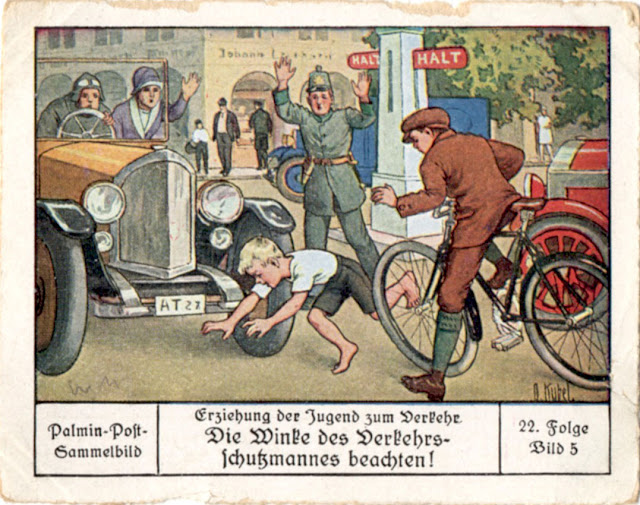 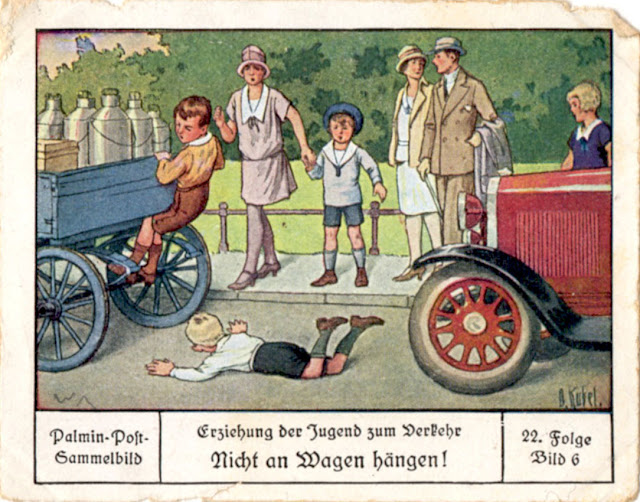