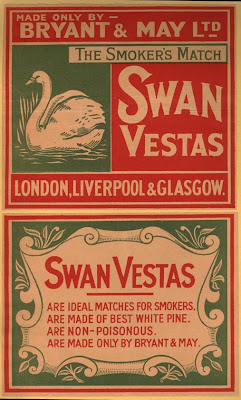 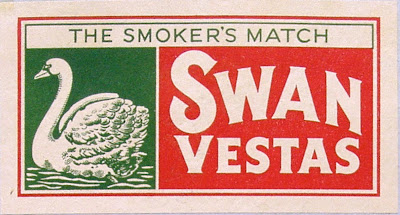 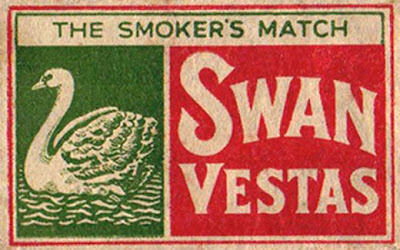 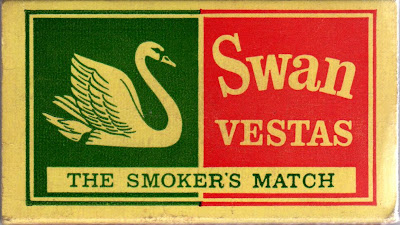 The Swan Vestas matchbox is a classic example of a design that has been subjected to a long sequence of minor amendments calculated to update without radically departing from the original. These examples come more or less at random and illustrate how the pack appeared before the war and in the 1970’s. 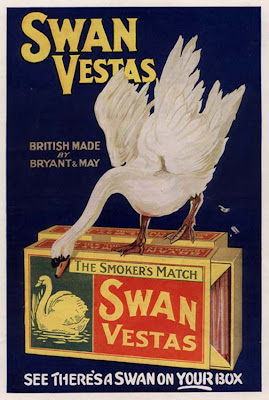 The ad comes from Cassell’s Magazine in 1928 and has the virtue of being simple and uncomplicated. There is a directness about it which can be seen in the work of Tom Purvis. What it lacks, sadly, is the manic exuberance which an artist of the calibre of Cappiello or Mauzan would have brought to the image of the swan. 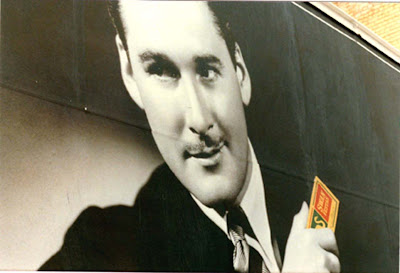 The detail from a poster was photographed in Sheffield in about 1990 and comes from what was a rather sophisticated campaign for such a humble product featuring Hollywood stars of the Golden Age brandishing boxes of Swan Vestas. The brand name in recent years has wandered across a wider product range and can be found on cigarette papers and lighter fuel.
Posted by Phil Beard at Monday, August 13, 2007

Great news! I found out today that Swan Vestas are available again in the US. At least here in Portland Oregon at Rich's, an excellent tobacconist and magazine store.
They really are the best.

I am 84 years of age and a life time smoker and user of Swan Vestas matches.I write now to say that in my view, there has been a very significant deterioration in the matches over the years.The match is thinner,the head is smaller and less reliable and the abrasive part wears out too quickly.
After 60 plus years,my pipe smoke is adversly affected.

As Dr Scott says - Swan Vestas have gone the way of many mas- produced products of old...
It was only through loyalty and nostalgia that I recently bought a multi-pack. Sadly, out of just one box there is easily 25% wastage for the same reasons as Dr Scott points out, I shall return them all and be less emotional with future purchases!

I just saw the 5 part You Tube series on the 1999 discovery of Mt. Everest British climber, George Mallory's body, who died on the mountain in 1924.

While his body had mummified during those 70+ years, among the personal artifacts found in his pockets, was a box of near mint SWAN Vestas matches, with the Left facing Swan, circa 1920's. This package can clearly be seen in part 5 of the series.

An interesting piece of history from Graham in Sunny Florida