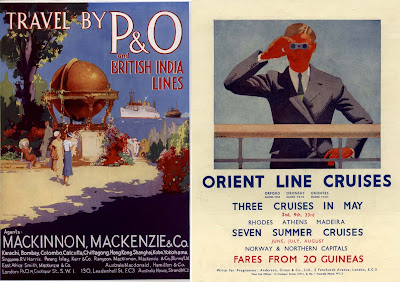 The P & O shipping line had a long tradition of advertising its services in the pages of Illustrated London News, Country Life and Punch where there was a reasonable chance of reaching the affluent elite who could afford to travel the empire aboard their luxury liners. The image above shows contrasting styles from successive decades, the 1920’s and 1930’s. In the earlier example, Frank Mason (1875-1965), marine painter turned poster artist, has created a dazzling vision of imperial adventure. The advertisement for Orient Line is much less ornate and reflects an acquaintance with modernism in the simplified drawing style and the use of sans serif fonts.

Below are two examples of the work of Frank Newbould. Newbould (1887-1951) was a master of simplifying complex images into zones of flat colour, a style pioneered by the Beggarstaff Brothers and refined in Germany by Ludwig Hohlwein. The London and North Eastern Railway (LNER) made extensive use of his talents and his flair for good humoured, anecdotal imagery was especially effective there. Working for Orient Line he happily rebalanced his colour values to tropical and delivered some very attractive advertising. 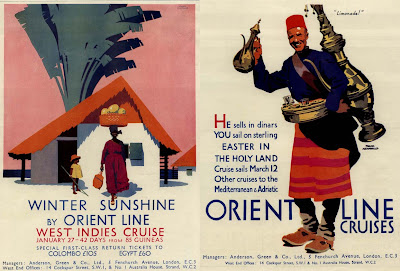