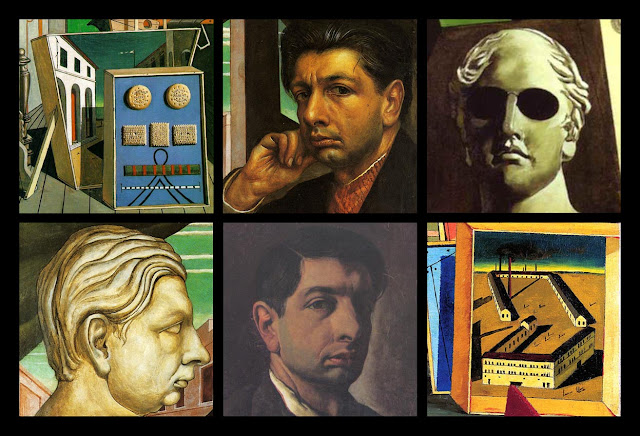 It is said that both André Breton and Yves Tanguy first encountered the paintings of de Chirico through the windows of a bus. Not the same bus. Breton became the proud owner of several de Chirico paintings that he continued to value throughout his life. But when de Chirico turned his back on his metaphysical paintings after 1918, his return to a reinvented classical tradition was resoundingly denounced by Breton with all the ferocity (which was considerable) at his disposal. And therein lies the problem with de Chirico. His early Paris paintings stand in the highest critical regard but there is no agreement on the merit of the paintings that occupied his attention during the last 60 years of his very long life. Three years after de Chirico’s death, in 1982, the Museum of Modern Art, New York put together a major exhibition that included no more than a handful of work from the years 1920 to 1935 and nothing whatsoever from the remaining forty plus years of his life. The bitterness of Breton’s reaction seemed to reverberate through the succeeding decades. 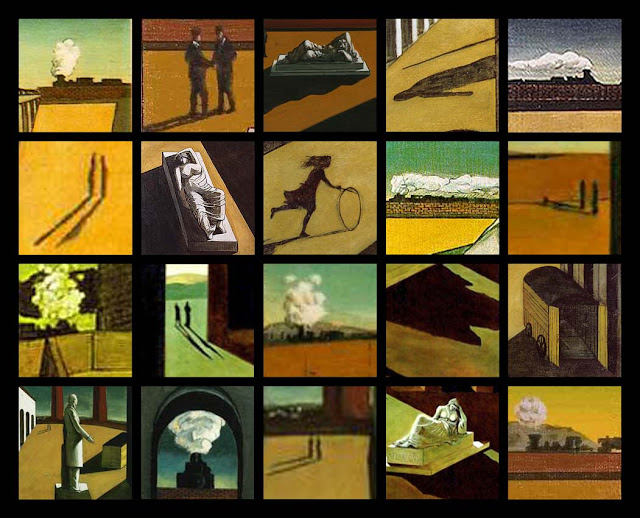 So fixed was the orthodox view of de Chirico as a lost talent that a re-evaluation on the part of revisionist critics and historians was inevitable. This process began in de Chirico’s last decades and climaxed in the 1980s when there was great critical enthusiasm for bad painting. The late work of Philip Guston and a European outbreak of mostly German and Italian painting of remarkable clumsiness and lack of finesse created a climate in which de Chirico’s adoption of deliberately heavy-handed technique, combined with vapid drawing seemed utterly in tune with the times. I don’t recall any outright condemnation of de Chirico’s early work from enthusiasts for the late work but there was an implication that a serious interest in the early work was a symptom of an unhealthy mind.

This spring, the Musée d’Art moderne de la Ville de Paris has an exhibition entitled, Giorgio de Chirico, La fabrique des rêves showing until May 24th. It provides a complete survey of de Chirico’s work and there is no avoiding the paintings produced in the years he fell out of favour. There’s enough late work to get a clear view of how the artist transformed himself from avant-garde favourite into a reactionary, technique obsessed, Renaissance caricaturist. At the same time his great facility for enigmatic imagery was never totally submerged and in among the late dross are some truly arresting images, especially in the Bains mysterieux series and the sun and moon series (derived from the 1930s illustrations for an edition of Apollinaire’s Calligrammes) from the late 1960s. In part, the steady decline in quality owed a lot the artist’s curmudgeonly nature, possessed of an irresistible urge to bite the hand that feeds. This impulse led him to initially renounce his early work and then systematically devalue it by making copious replicas of his more marketable work, frequently, but not always, inscribed with misleading dates. 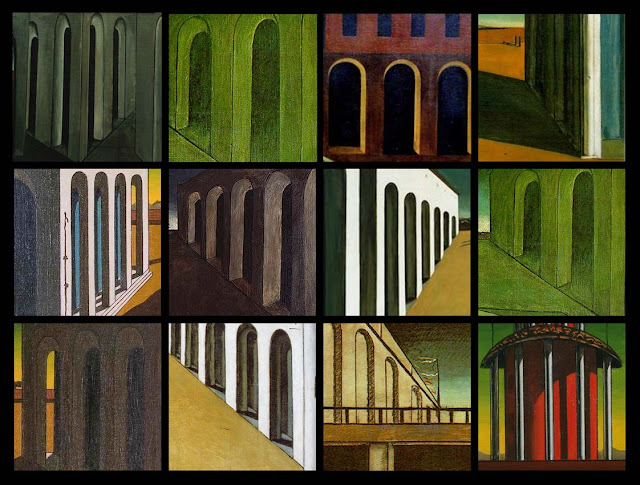 I suppose that if I had the good fortune to earn the praise of André Breton for making a decisive contribution to the birth of Surrealism, I might be tempted to take my foot off the pedal and just enjoy the moment. The pressure to carry on producing innovative imagery would have been immense and it’s quite understandable if de Chirico simply didn’t feel up to it. If you factor in an awkward personality in which radical and reactionary impulses were held in uncomfortable co-existence then it makes sense that de Chirico might suppress one or the other, and in the event it was the reactionary impulse that won out. I certainly can’t accept the proposition that the post 1920 work is of equal quality to the work that preceded it but it should be accepted that his talent for creepy and unsettling imagery didn’t completely evaporate and some interesting work was to be seen in the latter half of the exhibition alongside some truly egregious exercises in the art of painting badly. The genius of de Chirico resided in his ability to create a new landscape vocabulary that overturned most of our assumptions about the subject and fundamentally disorientated the spectator with the application of simple but potent strategies. De Chirico discovered new poetic values in such things as sculpted figures (where human tissue is replaced by stone), smoke from factory chimneys and passing steam trains, the long shadows of late afternoon sun, diminutive human figures surrounded by vast, hot and dusty, tilting picture planes, all enclosed by interminable arcades with conflicting vanishing points. It was the marriage of the antique (the Renaissance piazza) and the contemporary (symbols of the Age of Industry) and created a strange and haunting resonance with the landscape of our dreams.

Very interesting post. What you have described here about de Chirico, is of course also applicable to Salvador Dali, to get slightly off topic. Dali's work from the 1940's on, had a distinct commercial and repetitive nature. I'm often dismayed at how today's marketing of Dali products pays so much attention to the work of his later years, as opposed to the shear genius and creativity of the work he did in the 1920's and -30's! Anyway, I like your analysis of what makes de Chirico's early work so captivating!

could you tell me the name of the painting from which comes the image on the very bottom, second from the right? thank you.
http://1.bp.blogspot.com/_imwii1LdjiM/Sa1eMHIxKoI/AAAAAAAACJA/8KzOIlVMUfY/s1600-h/dech.00.jpg

Sorry for delay in responding - I've been away for a few days. As far as I know the title you are looking for is "Gare Montparnasse".
I hope this is helpful.