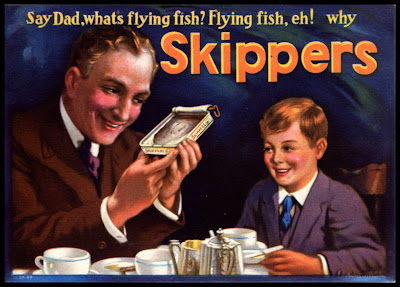 It’s difficult to recall those distant days when the attention of a wayward or distracted child could be held with the assistance of a sardine tin and some feeble wordplay. Even the finest of homes had space for this great delicacy. A shared passion for sardines bridged the generation gap enabling father and son to bond together. The attractions of Meccano and William books paled into insignificance when compared with the radiant sardine. In another ten years the young man may be a member of the Drones’ Club and driving a Bugatti along the Croisette at Cannes but somewhere deep in his heart is the cherished recollection of those Skippers sardines. If the sister products shown below exercise similar powers of attraction he may be well advised to extend his seduction technique by investing in a supply of My Lady tinned fruits. 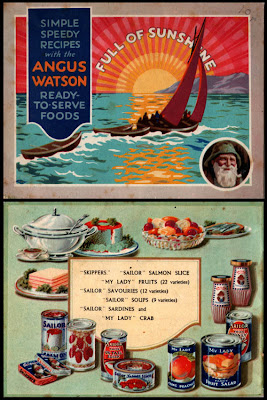 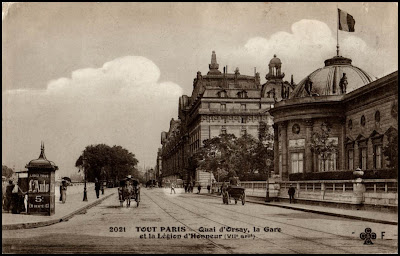 In April, the authorities at the Musée d’Orsay imposed a ban on all photography within the museum. This has not been a popular decision and protests continue. The CGT (Confédération Générale du Travail), representing the security staff at the museum have serious reservations and questions have been put to the Minister of Culture and Communication by Patrick Beaudouin, UMP Deputy for Val de Marne and Mayor of Saint-Mandé. Read more about this by following this link. An attempt on the part of the Louvre to implement a similar ban failed in 2005 when security guards were unable to cope with the volume of miscreants. The CGT claims that postcard sales are the museum’s most profitable activity and the action is intended to safeguard this profit stream. The museum rejects this accusation and maintains the position that safety of artworks, the movement of visitors and massive abuse of the previous prohibition on flash photography justifies the ban. Below is a translation of the formal response to all the hostile comments in the museum’s online Visitors’ Book.
This measure has no commercial purpose. To preserve the comfort of visitors and the safety of artworks, visitors are now prohibited from photographing or filming in the museum. This is particularly due to the numerous shots "at arm's length" via mobile phones. Reproductions of most works in the collections can be downloaded from the website. 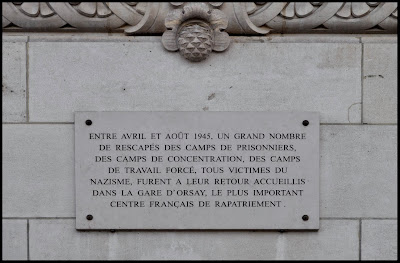 Despite all this, there’s much to photograph around the outside of the museum and to begin on a sombre note on the facade overlooking the Seine is this commemorative plaque reminding us of the grim episode in 1945 when the empty building was a reception centre for the repatriation of French citizens abducted by the Nazis. More here about this in a previous posting. There is also an interesting group of large-scale animal sculptures on the museum plaza that is widely ignored by most visitors. Prominent among them is Jeune éléphant pris au piège (Young Elephant Caught in a Trap) by Emmanuel Frémiet (1824-1910) originally made for the 1878 Exposition Universelle and formerly installed at Trocadéro. Another attraction is the imposing bronze Rhinocéros by Henri-Alfred Jacquemart (1824-96). 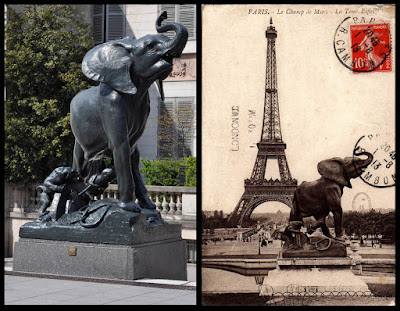 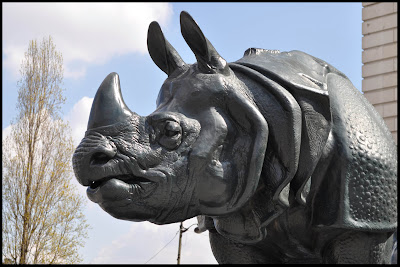 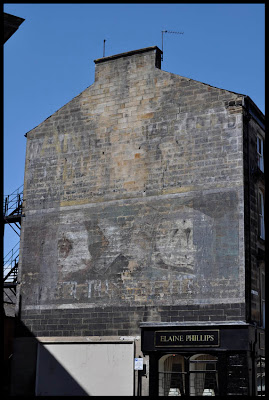 Writing about Ripolin brought to mind these relics of the great days of advertising sign-painting. There are some seriously dedicated practitioners in the art of Ghostsign hunting whose efforts merit the highest commendation. Their forensic skills have brought many a forgotten example to light and the results are widely posted on the web. Some of the most rewarding discoveries have been made when a neighbouring building has been demolished to reveal an almost pristine sign on a hitherto hidden surface. Sam Roberts’s project is the most extensive survey in the UK and includes a bibliography for those in search of even more detail. My expertise in the art of looking upwards has its limitations but even I couldn’t fail to see this specimen in Harrogate. 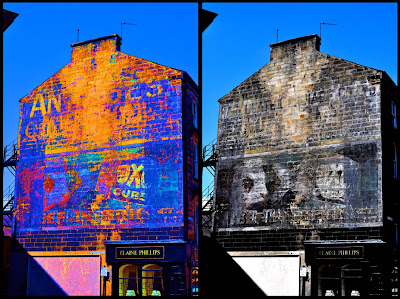 Part of the fascination of these things is the multiple layers of paintwork and a little reprocessing in Photoshop produced the results above and clarified the existence of an Oxo cube. The wall appears to have been painted as two separate panels with Oxo occupying the lower while the words Harrogate ........ Co. Ltd. can be seen near the top. Two more examples recorded recently come from Bridport (right) and Harrogate, just around the corner from the Oxo sign. The History of Advertising Trust hosts an archive of more than 600 examples of Ghostsigns from all over the UK. 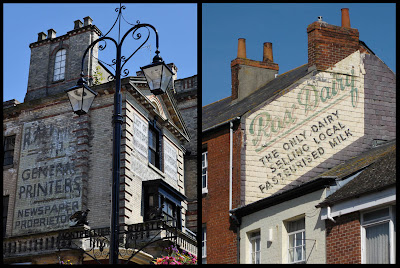 Postcard of the Day No. 38, Gentlemen of Nantes 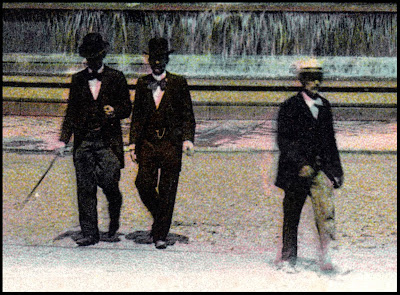 The ancient city of Nantes, famous for biscuits and shipbuilding, is the location for today’s expedition into the postcard universe. The sunlight is strong, the shadows are short and three smartly dressed males stride out of the past, one with great self-assurance, the other two are more posed in appearance. Behind them water streams from a complex multi-level fountain crowned by an allegorical figure representing the river Loire. On the far right, a small group of gentlemen of leisure have collected around a stall selling ice cream and sorbets, enjoying much needed relief from the heat of high summer. 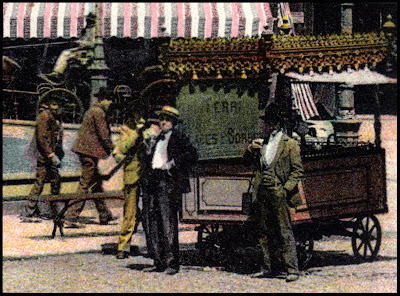 The extended facade in the background resembles a painted backdrop and brings a theatrical note to the scene. It is just one instant in the life of the city but no less compelling for that. We are presented with a manufactured spectacle from which any documentary realism that was present in the original photographic image has quietly faded away leaving a poetic reconstruction of the past. A brief look at Street View confirms that the fountain is still present in the Place Royale and the buildings appear little changed. It does seem that the fountain has been repositioned and given the amount of war damage inflicted on Nantes it’s quite likely that substantial rebuilding has taken place. 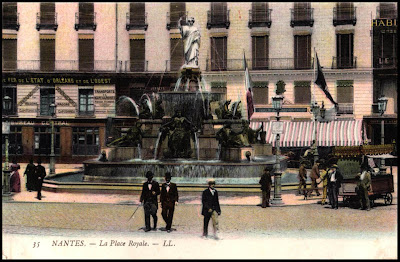 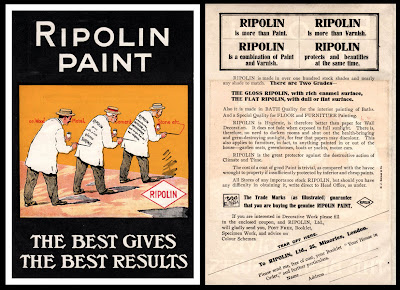 The three aristocrats of the housepainter’s brush, Riri, Polo and Lino first appeared in the service of Ripolin in a poster designed by Émile Vavasseur (1863-1949) in 1913. After almost a century of inscribing the virtues of Ripolin on each other’s smocks, their faded images can still occasionally be seen, locked in their curious formation, on gable ends in France and Belgium. Ripolin seems to have withdrawn from the UK market since the time of these ads but remains on sale in Europe. Picasso used to shop for Ripolin Enamels to combine the proletarian vigour of Ripolin with the refinement of traditional oil paint. If nothing else, the use of such humble material enabled the artist to repel any accusation of excessive artiness. None of which discouraged Ripolin from advertising their product as The Ideal Paint for Artistic Homes. 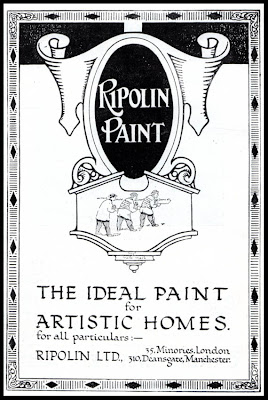 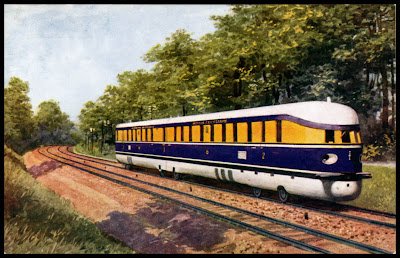 This is a postcard view of a train of benign and slightly goofy appearance that conceals a more sinister reality. It was constructed in Germany in the 1930s to provide a streamlined diesel-powered high-speed service between Hamburg and Berlin and became an essential weapon in Nazi Germany’s quest for international respectability. Supremacy in all matters of speed, power and performance was a key transport objective for the Reich and the achievements of this train were well publicised abroad. If the outside world could be dazzled by the triumphs of German engineering, the less palatable activities of the Reich might easily be overlooked. For British engineers this train became an object of intense curiosity and Sir Nigel Gresley of the LNER travelled to Germany in 1934 to experience it at first hand. Despite being impressed by the smooth running at sustained high speeds, Gresley returned convinced that he could do better by developing more efficient steam powered locomotives and in 1938 his streamlined A4 Pacific, Mallard set a world record speed of 126mph. 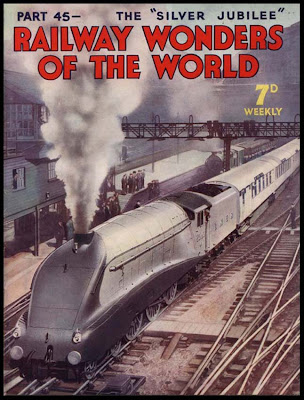 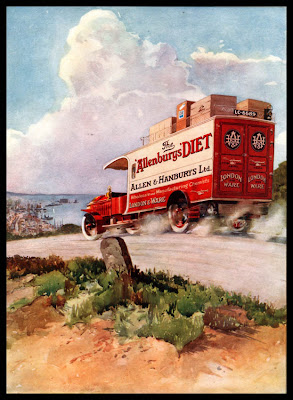 Infants and insomniacs rejoice, for relief is at hand in the form of fresh supplies of Cod Liver Oil, Milk Food and Allenburys Diet. In this attractive vintage advertising art from 1914, a smartly liveried example of the latest in vehicle technology raises dust on the highway as it speeds towards the small coastal town in the distance, fully laden with all the necessities of a healthy life. Allenburys were assiduous advertisers in publications such as Country Life, Punch, Illustrated London News and Good Housekeeping and wasted no opportunity to place their products in the public eye.

In 1914, delivery meant goods, telegrams and babies whereas today we are all in the business of delivery – teachers deliver lessons, dentists deliver oral health, communication providers deliver broadband - training, happiness, promises, information, success and solutions are all capable of delivery. To read a little more about the remarkable powers of Allenburys Diet, see the example below. Even more can be seen by following this link. 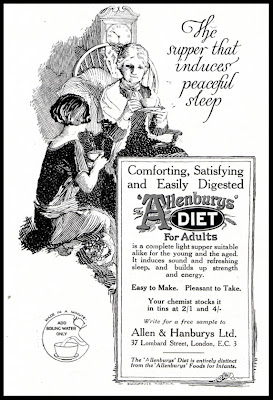 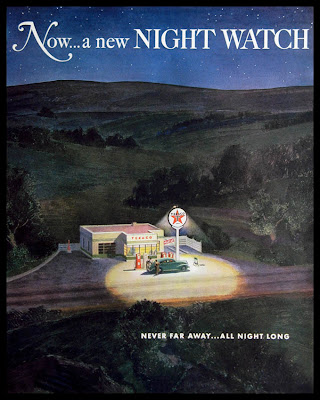 Two magazine ads of the 1940s from Texaco in which fear of darkness is exploited to sell the product. The lone red star of Texaco glows in the night sky promising security and mobility to the grateful traveller. Movie houses and drive-ins were showing a succession of film noirs in which the highway at night was Hollywood’s theatre of cruelty, a place where over-sized hands would rear up from the back seat and grip the victim’s throat or a stranger’s car might run you off the road into a deep ravine. Lost souls lurked in the shadows and death was an ever-present reality after the sun set on the great American highway. A trusted brand like Texaco brought much needed reassurance to the nervous and vulnerable motorist for whom the darkness concealed the most unfathomable terrors. 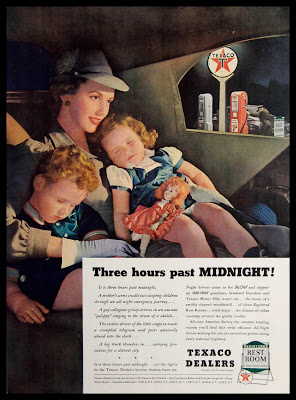