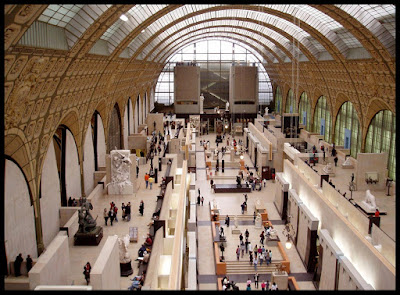 These are some things that I know about the Gare d’Orsay. It was built on a large scale in the Grand Manner and opened for business just in time for the Universal Exhibition of 1900. It was used by exclusively electrically powered trains. The station closed in 1935 and in 1962 Orson Welles filmed much of The Trial in the deserted building. Something I didn’t know, until I read Paris After the Liberation: 1944-1949 (Antony Beevor & Artemis Cooper), was that the Gare d’Orsay was employed in 1945 as a reception centre for processing les déportés, French citizens repatriated from Nazi Germany’s work camps, detention centres, prisons and concentration camps. Parisians were stunned by the utter wretchedness of les déportés whose suffering was written so unambiguously across their faces, putting the privations of life under the Occupation into perspective.

There are eye-witness accounts that describe the dark and cavernous interior of the former station within which circulated the naked and emaciated déportés, liberally dusted with de-lousing powder and sprayed with DDT, a hideous spectacle in which further humiliation was visited upon those whose nightmare seemed never to end. Like a Sebald moment, an image is created in the mind that will haunt this space for ever. Since 1985 the Gare d’Orsay has been home to France’s greatest art treasures of the Nineteenth Century among which is Courbet’s vast and crepuscular masterpiece, Un enterrement à Ornans, a painting that directly confronts death and extinction and cuts directly to the darkness at the heart of human consciousness. Courbet’s painting would be my candidate for an artistic companion piece to the demonic vision of bleached déportés, condemned forever in a vortex of disinfectant. 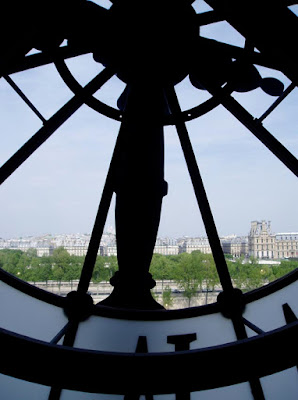 Wonderful post. I do love this building. I have done a series of paintings of the giant clocks in Gare d'Orsay. Thank you for the poignant history of the building.