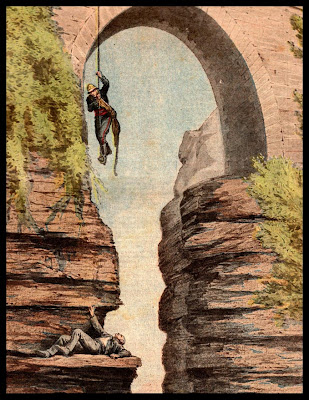 The road keeps leading back to the Parc des Buttes-Chaumont, Louis Aragon’s Laboratory of Dreams. In the centre of the disused quarry in which the park was formed, stood a towering rocky outcrop that had evaded the attentions of the quarrymen. In the Romantic vision that inspired the creation of the park this was transformed into a dramatic succession of pinnacles that might have come directly from the imagination of Caspar David Friedrich. Two bridges spanned the surrounding horseshoe shaped lake and connected this artificial island to the enclosing slopes of parkland. The shorter of these bridges is known as the Pont de Brique and is the setting for this sensational illustration from the pages of Le Petit Journal.

Aragon described this bridge as “the veritable Mecca of suicide”. It was said that the impulse to surrender life to the forces of gravity was so strong that it could overwhelm even those who had first set foot on the bridge with absolutely no thought of suicide in their heads. The additional barriers, designed to discourage this activity can be seen in the illustration. The team of rescuers are attempting to recover a man who has become trapped on a ledge, halfway down the rock-face. It looks like an unsuccessful suicide attempt but it might have been an accident or the result of an assault, leaving the audience in a condition of uncertainty as to whether the victim should be the object of sympathy or condemnation. A final thought, in the concluding section of Le Paysan de Paris, Aragon employs the metaphor of a dangling rope on the end of which our most powerful ideas may be found. 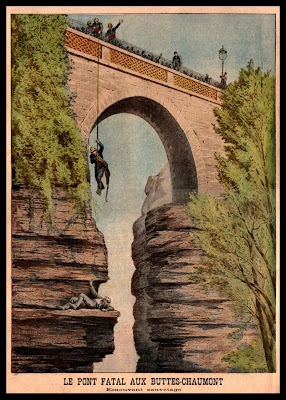 Such a beautiful series of sentences, leading to such a wonderful conclusion.