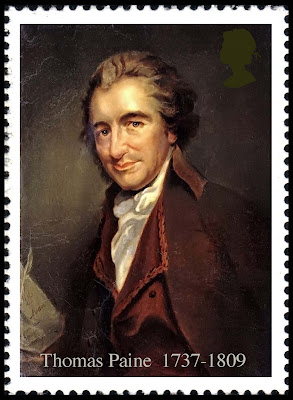 The idle commentator likes nothing better than placing his or her ill-thought opinions and prejudices in the mouths of those no longer living. What Would Jesus Say? is one of the more simplistic examples, others seen recently include, What would Kipling/ Orwell/ Churchill/ Marx/ Chesterton/ Buddy Holly et al say? So, what would Thomas Paine have said about the Private Finance Initiative, that masterpiece of accounting wizardry which has so successfully transferred vast amounts of property and cash from the public to the private sector? His disapproval would have been profound and expressed with great power and conviction. It doesn’t take much imagination to picture Paine contemplating the present political landscape with disgust. And some amazement at the quality of intellect deemed suitable for high political office; names such as Hoon, Blears and Smith depressingly come to mind. He might wonder that liberty is in such peril when its enemies are politicians of such modest abilities.

There has been a flurry of media attention directed toward Thomas Paine in the last week or so to mark the two hundredth anniversary of his death on June 8, 1809. It reminds us briefly of the existence of an Englishman of international reputation whose political philosophy rests very uneasily with many of the cherished ideals of what constitutes the essence of Englishness. At a time when those of his compatriots who had risen above the condition of agricultural labourer or factory hand were mostly preoccupied with exerting every possible advantage over their fellow men, Paine was taking the broader view and considering how to reconcile the interests of the individual and the interests of the wider community. The free-born Englishman fought to defend his right to travel the known world and extract maximum value from colonial exploitation while Paine concerned himself with defining and promoting the universal Rights of Man. Paine’s lifelong radicalism and refusal to submit to authority explains why he has never been admitted to the English Pantheon of Heroes.

To properly qualify for hero status an English radical must live long enough to recant his principles and ensure that his twilight years are a reactionary refrain. Persistent and dedicated challengers of the status quo are simply not welcome. Paine never modified his loathing of privilege and offered no concessions to his opponents. He was entirely free of endearing qualities and resisted all co-option into the folk-narrative of English eccentricity. Yet he was a significant participant in the two revolutions that shaped the history of the following centuries. Paine’s pamphlet, Common Sense (1776), played a major role in preparing the American colonists to declare their independence from Britain and in 1792 he turned up in Paris, serving on the Committee of Nine, drafting a new constitution for post-Revolutionary France. In addition he was a stay-maker, excise officer, school teacher, tobacconist and designer of bridges. The fantasy commemorative stamp places the sovereign and republican in uncomfortable proximity, obliging the sovereign to overlook her sworn enemy while maintaining an advantage in terms of height.
Posted by Phil Beard at Thursday, June 11, 2009