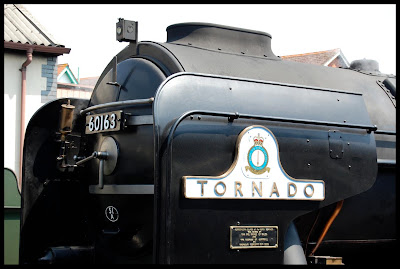 Darlington is a well-to-do market town in County Durham that has more in common with other north country islands of prosperity such as Beverley or Ilkley than it has with the nearby coastal former mining and ship-building communities. But as well as being a regional centre for professional services it has a long history as a railway town. For over a century, from 1863 to 1966, the workingmen of Darlington combined their craft and technical skills to produce legions of steam locomotives for the North Eastern Railway and its successors. Darlington Locomotive Works (known as North Road Shops) constructed many of the last express passenger steam locomotives designed for the London & North Eastern Railway (LNER) between 1948 and 1950. Forty-nine examples were built to the A1 design at Darlington and Doncaster in only 16 months; it would take 18 years, beginning in 1990, to build one more. Every single example was scrapped in the frenzied rush to move from steam to diesel power that took place in the 1960s. The new-build A1 locomotive was assembled and completed last year, appropriately, in the town of Darlington. 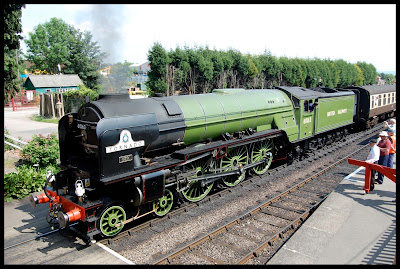 The story of how this was achieved can be read by following this link. The finished article is a triumph of persistence and engineering excellence and has been on a visit to the West Somerset Railway where these photos were taken. It’s not easy to explain to a sceptical audience how these machines continue to exert a grip on the imagination that lasts more than half a century. The sense of connection to a distant past forms part of the explanation and there’s also a link to a lost era of precision craft skills where direct human intervention was a key element in the manufacturing process and the workforce was rewarded with tangible evidence of their efforts. A steam locomotive may be a complex machine but the principles that power it are relatively simple to comprehend. The process that drives the machine forward is visible for all to see in the movement of cylinders and connecting rods responding to injections of pressurised steam. The machine itself begins to acquire some of the characteristics of a living creature and it’s a short step for some of the more susceptible among us to develop the sort of relationship with an inanimate object that others might form with an actual living creature. 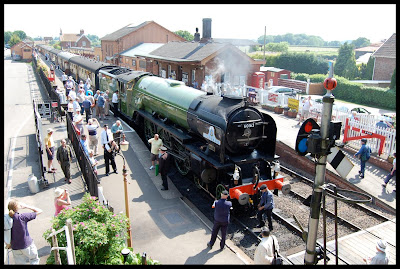 As the years advance, childhood memories don’t simply lose definition, they mutate and combine together to create new fictions until a point is reached where there is precious little documentary content remaining. Perhaps events like this that bring us face to face with something last seen more than four decades ago provide us with the illusion of refocusing those diffuse recollections still lodged in remote chambers of the cortex. It felt a bit like that to me, and illusion or not, it also felt immensely satisfying. Which leaves us, in effect, swimming in a warm bath of nostalgia, desperately seeking to dignify the proceedings with some intellectual vertebrae. It can’t really be done but it’s fun to try. One thing I do recall with pleasure from the past that I shall almost certainly never see again is the sight of these locomotives hard at work, labouring under a generous layer of grime and filth, their polished and painted surfaces scarred by leaks of corrosive fluid complete with smokebox doors scorched by over-heating. In case this sounds churlish, I should make it clear that the pristine condition and perfect presentation of this locomotive is an absolute wonder to behold and something that those of us who take an interest in these things, never expected to see again. 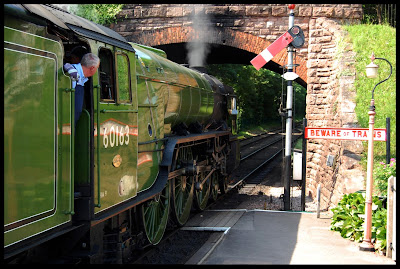