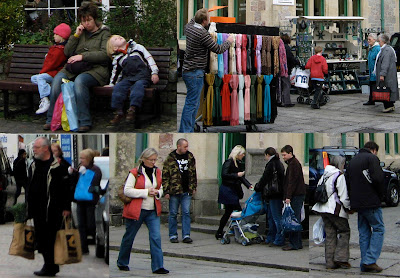 In a recent posting the anonymous citizens of mid-century Moscow made an appearance. As so often, it took a while to appreciate that the same thing was going on in my own photographs. Today’s images are unintentional or accidental photographs of street life in the Cornish city of Truro. The intention was to photograph buildings of interest. Serious photographers go on the prowl in unsocial hours or simply Photoshop unwanted human presence out of existence. Not being attracted to these options, this is what happens when you take your chances on a Saturday morning. I can take no credit for these images because in every case my attention was exclusively on the building behind. It is demoralizing to note that some of the vignettes are more interesting than the photographs from which they have been cropped. Hardcore street photographers have to either cultivate an air of invisibility or take the William Klein route of direct confrontation with the subject. There are some awkward ethical issues to consider relating to privacy whatever your approach. Having lived and worked in London for many years my own likeness must have been recorded many times over in the margin of visitor snapshots. A short detour or a brief check in forward momentum is not always possible. And in Surveillance Britain it is said that a citizen (or, more accurately, subject) can be recorded up to 300 times a day in a country where there is one CCTV device for every 14 people. A dystopian future beckons in which images of individuals gathered on a random and purposeless basis, multiply ad infinitum requiring ever more complex management systems to analyse and store data. Perhaps a socially responsible photographer should refrain from adding to this vast stockpile of surveillance data and concentrate on still-life subjects. An alternative would be to establish one’s own surveillance project, select a target and start accumulating data. It may sound unwholesome but it’s exactly what Walker Evans did when he took a concealed camera with him on his travels in the New York subway. It later became a fascinating book of un-posed subway portraits (“Many Are Called”, 1966). 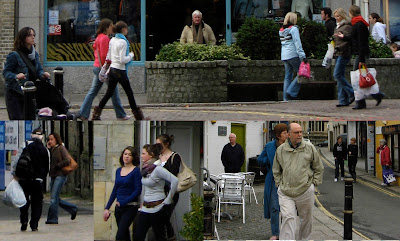