An exhibition entitled Silent Witnesses: Graphic Novels Without Words opened in Lincoln on May 29th. and runs until August 30th. Details can be seen here. Featured artists include Frans Masereel, Otto Nückel and Eric Drooker. Below you can read the brief essay that I wrote for inclusion in the exhibition catalogue on the subject of the splendid Mr Drooker. 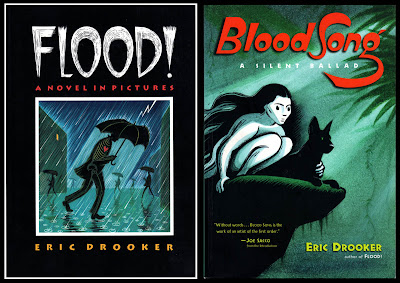 It’s always a great event when, once or twice a year, the New Yorker appears with an Eric Drooker cover. For over a decade Drooker has been an occasional but regular contributor to the last major magazine to exclusively feature hand drawn artwork on the front cover. Under the inspired art direction of Françoise Mouly, the New Yorker has continued a long tradition of graphic excellence and provided Drooker with a platform for his melancholy visions of an urban civilisation that over-reached itself. In the 1980s, Drooker’s illustrations belonged on a rather higher shelf, on the front page of Screw magazine.

Drooker was born on New York’s Lower East Side into a family with generations steeped in political radicalism. This provided a direct link with the often overlooked culture of New York social activism – New Masses, William Gropper, Philip Evergood, Woody Guthrie. He grew up in Lower Manhattan with a passion for the poetry of the city which he explored on endless cycle rides. A talent for drawing lead to the Cooper Union where he studied Fine Art, specialising in sculpture. After graduation he returned to his earlier enthusiasm for Masereel, Lynd Ward, Robert Crumb and Zap comics and immersed himself in drawing and painting. His evolution into a self-publishing comic book artist was also stimulated by an involvement in street politics and radical causes.

Drooker’s graphic novel, Flood!: A Novel in Pictures was published in 1992 and demonstrated how effectively he had absorbed and transformed the inherited visual language of Frans Masereel, the Flemish 1920s pioneer of social commentary in wordless fiction. Drooker’s first awareness of Masereel dates from the age of 10 when his grandfather gave him copies of Dover reprints of Passionate Journey and The City. In a 2003 interview Drooker described how these exemplars seeped into his artistic consciousness over the following decade to the point where they became a major inspiration.

The anonymous everyman hero of Flood! fights for survival in a brutal, callous metropolis in a timeframe that begins in the era of Reaganomics, dives back into the pre-history of Manhattan before rocketing forward into a future of environmental catastrophe. Soft, warm-blooded creatures navigate through a hostile world of hard metallic surfaces, where interminable flights of concrete steps plunge deep into the darkness under the rain-swept city streets. Alone and isolated, our hero is the only person to brave the incessant downpour without the protection of an umbrella. The city rapidly decomposes in the face of the eternal deluge and the reader is transported via an airborne transition into a sinister vision of the carnival at the end of the Universe. In the final third of the book the blue ink is introduced by the artist in person as he enters his own narrative. What follows is a complex meditation on early American hidden history, on militarism and the brutality of the state and the futility of fighting environmental forces with human technology. The closing image shows the twin peaks of the Chrysler Building and the Empire State just above the waterline with a modest Ark sailing between them.

The narrative tempo is driven along by irresistible visual rhythms, formal repetitions and a picture frame that divides and sub-divides into ever smaller units before exploding back into full page imagery. The tension is sustained by the power of Drooker’s drawing and his talent for narrative compression. Polarities of light and dark dramatise images of stark savagery and physical exuberance. Drooker has acknowledged the influence of Max Beckman, Otto Dix and Ernst Barlach. A sense of mechanistic alienation is conveyed through interludes of calm composure where the poetry of the city illuminates the scene. The ambivalence of his feelings about the city is revealed in the loving attention to such details as the slab-sided subway trains, the stacks of newsprint on the news stand and the jungle of sleazy signage devoted to marketing pleasures of the flesh. Freedom from oppression, ethnic diversity and respect for the human spirit are at the heart of Drooker’s vision and memorably reinforced by the wonderfully simple graphic device of the human x-ray where the skeleton and heart are revealed as emblems of human frailty and vulnerability.

Drooker has admitted that without early exposure to Masereel he might never have gravitated to wordless fiction and he offered the interesting thought that telling stories in pictures was a very effective way of communicating complex ideas to working communities divided by a multitude of languages. These comments, and all others attributed to Eric Drooker are taken from an indispensable interview published in The Comics Journal, Issue 253, June 2003. The Eric Drooker website is a visual delight and can be seen by following this link. 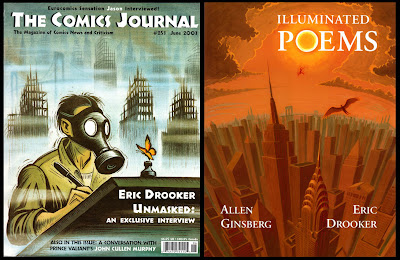