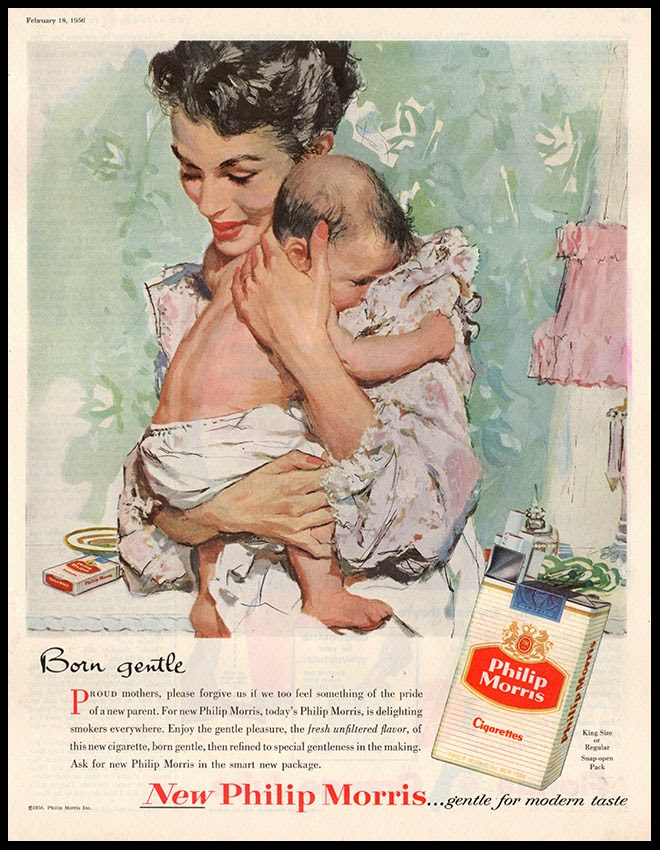 This ad for Philip Morris cigarettes bears examination for a number of reasons. To begin, it’s a case of borrowing a convention from one product range (soft tissue and personal hygiene) and applying it to another very different. While women were often portrayed in tobacco advertising they were usually presented as either working women, exemplars of high fashion, celebrity goddesses or free spirits asserting their independence. Female smokers formed the target audience but great care was taken to avoid alienating men with troubling indicators of gender equality. I can’t find another example of mother and baby promoting tobacco products. All the noxious fumes associated with tobacco combustion are sweetly dispersed in the mind by a cloud of talcum powder and infant formula. There’s a sense of protection and security and the gentle touch of soft and yielding skin. And the stench of stale tobacco and malodorous breath are all forgotten. As far back as 1927 there were physicians such as Dr. Bertha Van Hoosen who wrote “Motherhood and tobacco are as antagonistic as water and fire ... motherhood is too complex to tamper with tobacco or any other drug-forming habit.” Other medical critics noted links between nicotine and spontaneous abortion and claimed that nicotine was present in amniotic fluid and breast-milk. In the light of all this, to associate motherhood and smoking in this way in 1956 was a masterpiece of effrontery. With hindsight, given what is now known about the impact of smoking on the unborn child, it seems even more impudent and reckless. 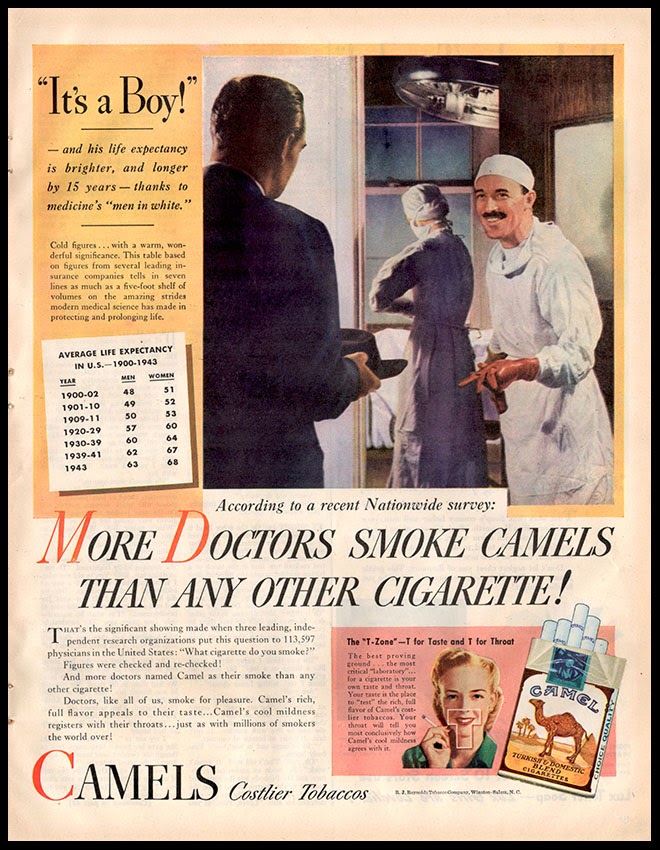 This companion piece is an example of one of the most notorious campaigns in advertising history when the tobacco industry responded to the rising tide of health concerns with literally breath-taking counter-claims that smoking was essential for good health, offering protection against coughs and sore throats. And, endorsed by the medical profession. The careless reader of this example (which could be sub-titled Birth of a Smoker) might well conclude that life expectancy was rising hand in hand with the rising consumption of tobacco. The slogan, More Doctors Smoke Camels Than Any Other Cigarette was employed for 6 years in a sustained campaign of disinformation and obfuscation devised to undermine the growing volume of scientific evidence demonstrating a link between smoking and lung cancer. To back up the slogan, free packs of Camels were distributed at medical conferences while a team of pollsters was employed to ask doctors what brand of cigarette they were carrying. The results were presented as ‘independent research’. A detailed and thorough account of this inglorious episode can be read in “The Cigarette Century” by Allan M Brandt (Basic Books, 2007).
Posted by Phil Beard at Wednesday, July 16, 2014