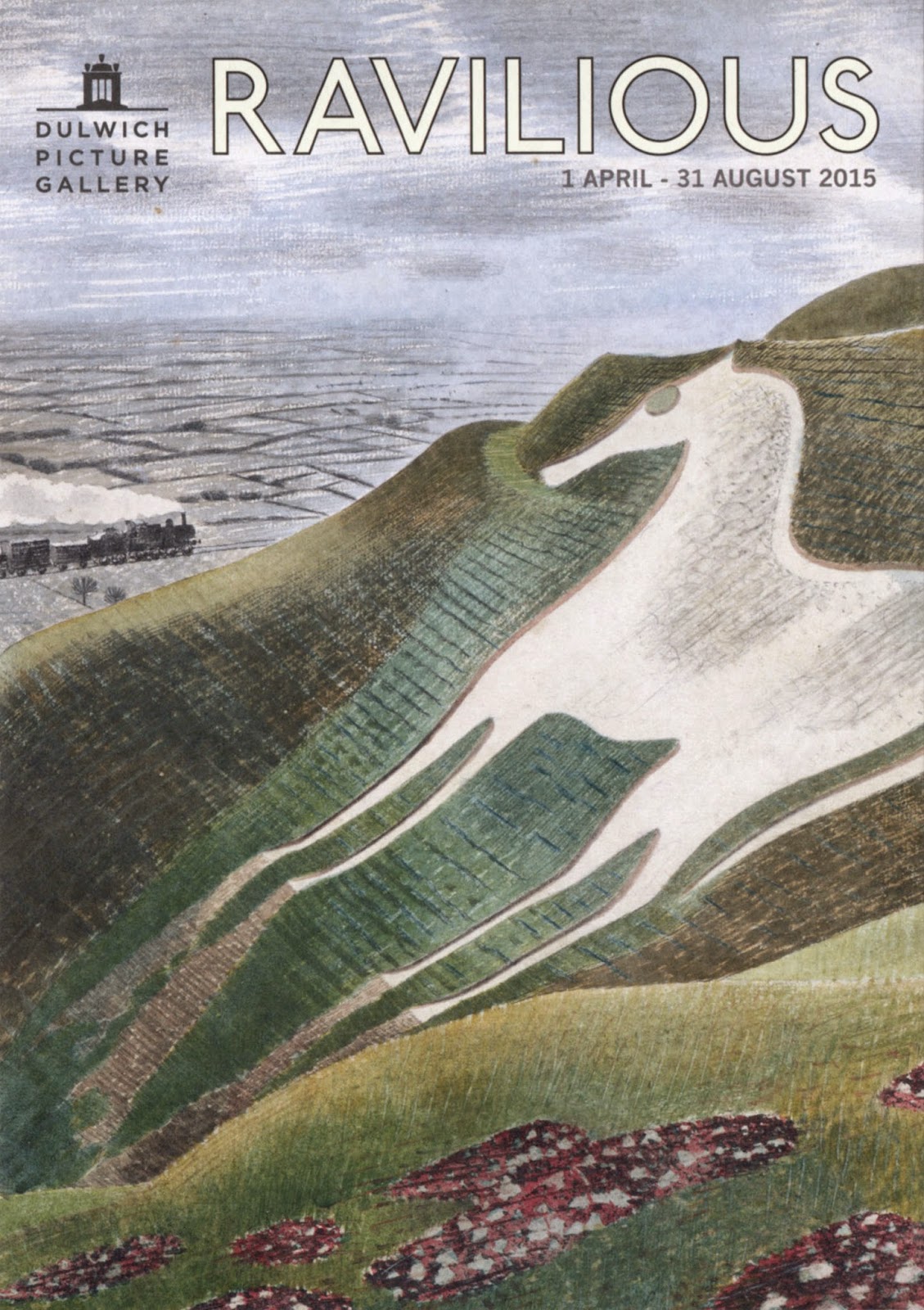 It’s very interesting to observe just how popular Eric Ravilious has become in recent years after decades of polite neglect. The woodcuts, the illustrated books and the Wedgwood ceramics have all commanded high prices since the 1970s but art world opinion formers held a view that Paul Nash, Henry Moore and Francis Bacon are serious, heavyweight artists while Ravilious, along with Burra, Wadsworth, William Roberts and Tristram Hillier, belongs firmly in the lightweight category. Unlike Paul Nash, the work of Ravilious showed little or no Modernist influence – no Cubism and no more than a trace of Surrealism – thus it could be excluded from the conventional timeline organised around the absorption of Modernism into British art practice. The quality of dispassionate observation in the work and the lack of any apparent inner turmoil further disqualified Ravilious from serious consideration. Perhaps the time is now right for appreciation of Ravilious’s crisp formal compositional elegance and inventive and precise mark-making. Perhaps the sense of distance that Ravilious instinctively maintained with his subject matter strikes a chord with contemporary taste. Perhaps his understanding of the interaction of geology, climate and land use on the formation of our landscape is in tune with contemporary experience-based approaches to writing on natural history (Roger Deakin, Richard Mabey, Robert Macfarlane). The question is addressed by the exhibition curator, James Russell in a blogpost here.

There’s another art world audience where the highest value is placed on a sense of British (or English) pastoral values celebrating artists who recreate or represent the rural scene in all its picturesque glory – a world that is permanently under threat from insensitive development, factory farming and political interference on the part of a metropolitan elite hostile to the countryside and its long-suffering inhabitants. For this audience gestural paint handling commands a premium and there’s no appetite for confronting the awkward realities of country life. Ravilious cannot be fitted into this model – there is no sentiment in his paintings, no nostalgia for a lost Golden Age and no anecdotal ingratiation. The landscapes are largely devoid of human presence, there are no gestures to the twin gods of Huntin’ and Fishin’, no faithful hounds, no yeoman farmers, no furtive poachers, no cider-swilling hay-makers or toiling hedge-layers and no radiant sunsets to bathe the scene in celestial golden light. More often than not the rain slants down out of slate grey skies.

The Dulwich exhibition is organised into a series of themed rooms – an arrangement that makes it easy to compare different approaches to similar subjects. It quickly becomes apparent that Ravilious is a great painter of barbed wire – he sees it everywhere, not just in coastal defences but in the heart of the countryside where it stands as a reminder of the primacy of land tenure and property rights, uncomfortable facts that are usually omitted from our collective vision of rural bliss based as it is on the fallacy that we all share ownership of the country landscape. It also serves as a compositional device, adding formal interest in the foreground and framing or sub-dividing the distant view. In the manner of Japanese print-makers Ravilious takes pleasure in placing significant objects in front of the view as spatial reference points to pull the eye back and forth. The objects he chooses are deliberately commonplace and often industrially manufactured, having the effect of denying the viewer a purely pastoral reading. On other occasions another device popular with Japanese artists is deployed when what would normally be a major point of interest (a chalk figure, a lighthouse or a convoy of warships) is marginalised or diminished and must fight for attention with a much more humble object (some ragged livestock fencing, a rusting agricultural machine or a group of empty barrels) enjoying pride of place. Ravilious is much more than an uncritical lover of the English landscape - he understands, and shares the elemental response that landscape evokes but declines to ignore the human traces that form and sometimes degrade it. His intelligence looks beneath the surface appearance for explanations and a deeper understanding of the forces that shape our landscape.

Something I hadn’t noticed before was the way that some of the paintings worked in tandem – the best example being the image of the Westbury White Horse glimpsed through the window of a train paired with the oblique view of the same White Horse observed from the crown of the ridge, looking down toward the train crossing the distant plain below. Viewed together they seem to take possession of the entire landscape that lies between the two vantage points. Another pair of paintings comprises the expansive disruptive coastal scene with Beachy Head lighthouse at the focal point together with the gridiron coastal view through the window of the Belle Tout lighthouse. (OK – not a perfect comparison, the Belle Tout being the lighthouse that Beachy Head replaced.)

Only the aviation subjects expose Ravilious’s limitations. Elegant, sensitive and atmospheric as they are the aircraft paintings simply don’t bear comparison with those of Paul Nash. Nash captured the sense of impending tragedy in the mind of the onlooker – we can imagine standing on the chalk downland in the full heat of the summer sun, the hum of insects and the call of the skylark combining with the distant drone of aero-engines. Somewhere, on the periphery of our vision, terrible events are evolving – shells and bullets are tearing into metal, burning fuel is transforming aircraft into aerial crematoria that spiral out of the sky in uncontrolled dives. This is somehow conveyed without any direct descriptive imagery and takes Nash’s work to a level that Ravilious never really attempted. While Ravilious seemed to paint with perfect composure and confidence, with Nash painting was more problematic, more of a struggle with intractable materials. As a result the pleasures of Ravilious are available to all while Nash implies deeper human truths in less comforting forms.

The visual wit and the eye for the absurd or unsettling feature brings added interest to many paintings where vending machines, diving suits, beach huts and boat winches seem to acquire human characteristics. By contrast, in the wartime Command Centre studies the figures of servicemen and women are poised on the point of dissolving into the atmosphere, completely overshadowed by wall charts and step ladders that insistently proclaim their material substance. In one painting a monumental teleprinter projects a glowering presence that far exceeds any human figure on view elsewhere.

In the end artists who keep their emotional distance never seem to achieve major status in art world league tables – examples include the painters Charles Sheeler and Patrick Caulfield. If there’s a spectrum ranging from souls in torment at one extreme to the cheerfully disengaged and analytical at the other, the art world finds the former infinitely more attractive than the latter. These distinctions have little to do with how people conduct their lives and much more to do with how much of themselves they decide to include in their art. It’s hardly a surprise in an age of narcissism that artists exhibiting this very quality attract the widest interest. This is what elevates Van Gogh over Seurat in popular esteem, or Claude over Poussin or Delacroix over Ingres. All are significant artists but some will always be more widely acceptable than others. Which makes it all the more curious that Ravilious should suddenly be more popular than ever – it would be welcome news if the public appetite for art that’s “all about me” is finally exhausted.
Posted by Phil Beard at Wednesday, April 29, 2015

A very interesting piece, and I shall look at the paintings again and differently. Maybe its his deceptive apparent simplicity which appeals - everything is instantly recognisable. Thanks for your blogs.

thulannguyen said...
This comment has been removed by a blog administrator.
26 December 2019 at 03:01