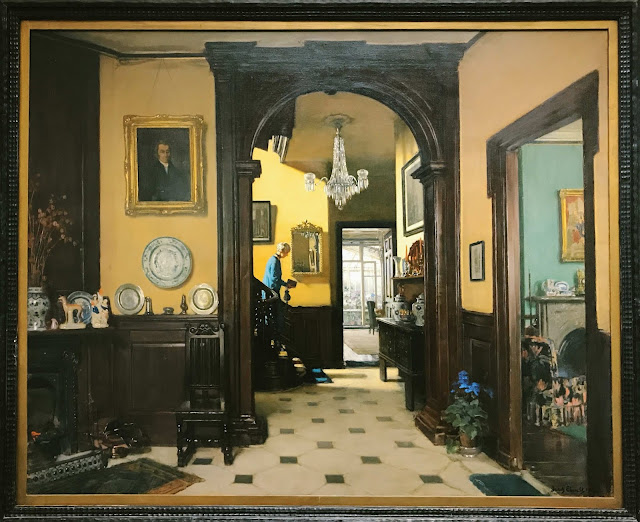 Mr. Elwell lived most of his life in the prosperous East Yorkshire market town of Beverley where he must have been on good terms with his neighbour. A degree of trust is required before inviting an artist through the front door to make a painting of the interior. Looking at his subject matter suggests that Elwell would have presented a most respectable face to the world without a shadow of impropriety. Modernism left no mark upon him as he pursued a long career as portrait painter to the second rank of eminence - Brigadiers and Aldermen, Clergymen and Yorkshire businessmen. The portraits display the sense of duty and self-importance that goes with responsibility and high office - occasionally relieving the gravity with a hint of a half-smile. Glacially observed and attentive to all the badges and accessories of the great and good, Elwell certainly delivered value for money. All too easy to dismiss as banal and unimaginative. 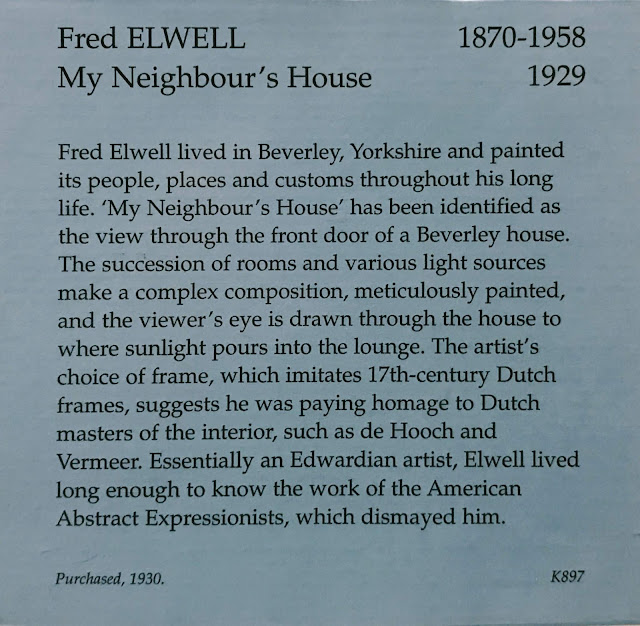 We can safely assume that Elwell was of a conservative disposition and his more personal paintings make that very clear. Rooted in his Yorkshire homeland, Elwell’s lovingly realised paintings of local pig farms and cow sheds outshine his portraits in terms of emotional depth. Progress made him uncomfortable and he was drawn to subjects such as “The Last Hansom Cab” and “The Last Pipe-maker in Beverley” to resist the passage of time. The language of gesture and capturing movement was not a strong point - most human figures resembled laboratory specimens, cryonically frozen in their discomfort. The effect of this could be unintentionally alarming - the claustrophobic “Birthday Party” makes for an unsettling joyless image where the peeling of an orange, the gleam of a monocle and the gripping of a pipe all take on a sinister air. Animation was only achieved when there was a degree of identification with the subject as in the full-length portrait of a sturdy pub landlord or the posthumous portrait of the 16 year old hero of the Battle of Jutland, “John Travers Cornwell VC”. 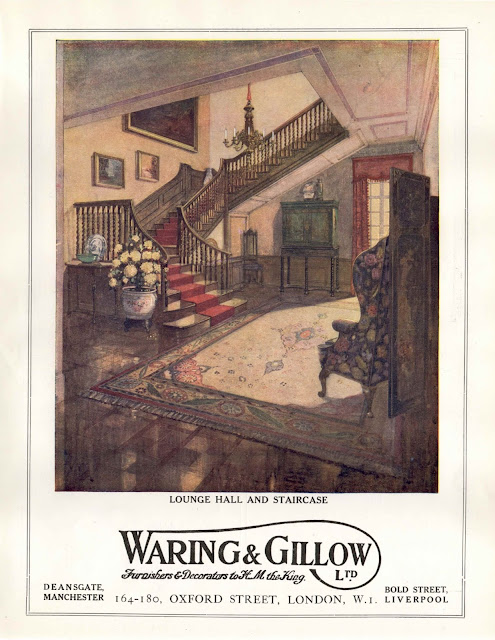 Inside his neighbour’s house, Elwell discovered a sequence of well ordered domestic spaces that reminded him of the Golden Age Dutch Interiors with which he would have been familiar. His easel was placed accordingly to take advantage of the measured spatial recession through four defined volumes all the way to the conservatory at the back of the house. Most of Elwell’s major set-piece interiors with group portraits were presented in a closed box-like space giving them the appearance of a diorama - this was an opportunity to break out of the box and drill deeper into private space. Dark varnished wainscoting and surrounds on the central arch and doorframes set the tone. An ancestral portrait stares down over a display of family treasures including silver chargers and porcelain figures while a malevolent coal scuttle gleams in the corner. (A typical supplier of this style was Waring & Gillow’s department store as shown in this advertising.) A solid Victorian dresser draws the eye into the centre of the house where a figure descends a staircase on our left. A shaft of sunlight floods down the stairs, reflecting off the chandelier and defining the back of the descending figure. Deeper into the composition brings us to a carpeted room beyond which a wall of glazing gives on to a conservatory with flowering plants. The human presence is diffident, hesitant and slow moving - she holds a box and a drawstring purse but there is no narrative drive to make further sense of this. Objective scrutiny and dispassionate recording dominate the painting. 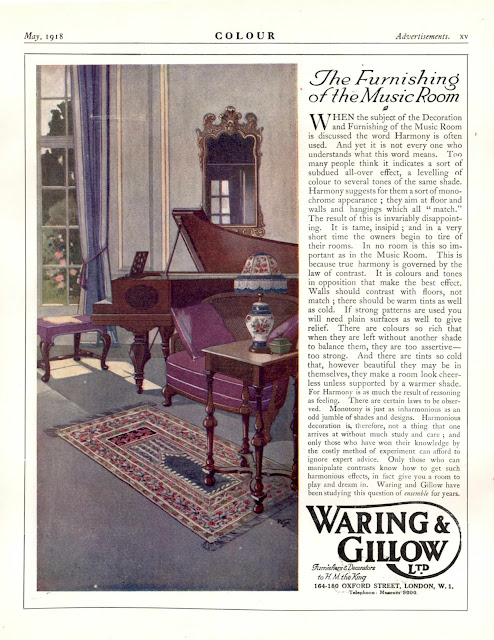 Elwell leads us into a private space, minutely describing what falls in his visual field while withholding any sense of the lives lived therein. We can infer material wellbeing from the scale of the house and the value of the contents. All is dusted and polished to a fault by domestic servants. Vintage furnishings and an accumulation of antiques would suggest elderly residents with a need to surround themselves with the trappings of tradition in moderation, a very English avoidance of ostentation. Alongside this, reticence and suppression of all things emotional help maintain an air of calm. I realise I’m beginning to describe things witnessed in childhood when obliged to join in family visits to unmarried great-aunts born in the 1870s and 1880s, whose vast Victorian villa in Stockton-on-Tees looked much like this. Inside the drapery sagged with inertia and the bookshelves were lined with the works of Carlyle, Macaulay, Thackeray, Dickens and the Waverley novels, all in the minutest of fonts, and the most exciting reading material was back issues of the Christian Science Monitor. Not even the Readers’ Digest could penetrate this citadel of resistance to the post-war settlement. In the gloomiest of rooms, the aunts could hardly be distinguished from the soft furnishings in which they were sunk - their utterances were largely confined to disconcertingly direct interrogation (What do you intend to do with your life?), candid observations (Hasn’t he got a lot of spots?) or behavioural injunctions (Do sit up straight and stop scowling). All three wore hearing-aids of generous dimensions giving rise to raised voices on all sides and much mutual incomprehension. They could be graded by analysing the sub-atomic clouds of disapproval they radiated that ranged from average to full-on nuclear. Not to be wondered at when you consider that we visitors had absolutely nothing of interest to communicate. It was years before it occurred to me that their relief at our departure could well have exceeded our own. Upon which, out came the State Express and the Bushmills as hands of cards were dealt and the Christian Science Monitor was examined for its horse-racing tips.

Back to the matter in hand - Elwell, without any conscious intention of doing so, has created something of mystery that defies understanding. We can guess but we cannot fully know what it is we are seeing. The figure on the stairs remains stubbornly present, yet devoid of significance. There may be a corpse laid out on the polished floor of the room on the right. There may be an armed intruder pursuing the figure on the stairs. Or there may be a riotous luncheon party in progress in the room next to the conservatory. None of this is likely. But what we can say is that the way the sunlight splashes on the stair carpet or the mirror reflection opens up another perspective recession have a visual poetry as unexpected as it is enriching.

The painting can be seen in the Bristol Museum and Art Gallery.
Posted by Phil Beard at Tuesday, October 29, 2019