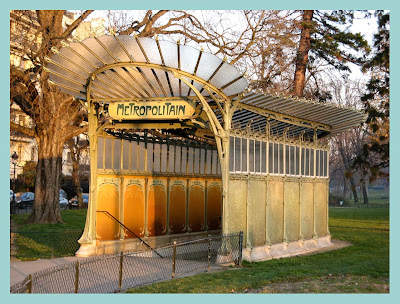 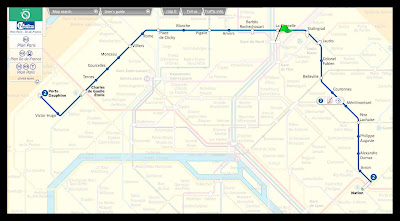 The pleasures of line 2 on the Paris Métro include the last surviving Hector Guimard édicule at Porte Dauphine, Parc Monceau, Père Lachaise cemetery and an elevated section from Jaurès to Barbès Rochechouart that discreetly dives back underground at Anvers to spare the traveller from the sleaze between Pigalle and Place de Clichy. A less celebrated highlight is the opportunity to admire the commercial effrontery of the wonderfully egregious ribbon of Tati stores at Barbès. At Jaurès there’s easy access to the Canal Saint-Martin and Bassin de la Villette. Also at Jaurès is one of the last surviving Parisian toll-houses (Rotonde de la Villette) built for Louis XVI between 1784 and 1791 to tax all goods entering the city and add to his already considerable unpopularity. Claude Nicolas Ledoux was the architect responsible for the Neoclassical designs. Most of these detested structures were demolished by an ungrateful populace soon after the Revolution but another survivor can be found some 10 stations to the west at the entrance to Parc Monceau. 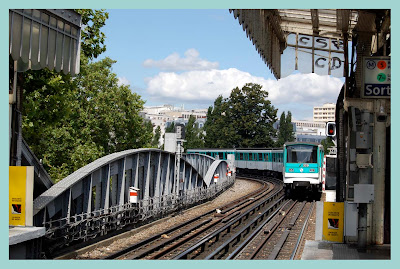 I have written before on the subject of the métro aérien and the splendour of the elevated sections. Revisiting in summer brings the additional delight of a sense of cruising through the treetops as the foliage encroaches on the rippling profile of the viaduct. The architectural style of the métro aérien is robust bordering on the brutal. Massive stone abutments and fluted Neoclassical cast iron columns along the central reservation support substantial steel trusses and a dark and uninviting space is created underneath. The métro entrances tend to be simple and unadorned and the exits are spectacular exercises in cast iron brutalism with security fencing and massive turnstiles that discourage even the most determined prospective intruder from attempting an illegal access. I rather like the association with the architecture of prisons and football grounds. 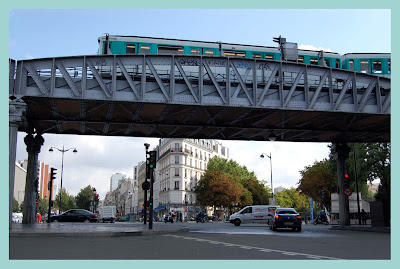 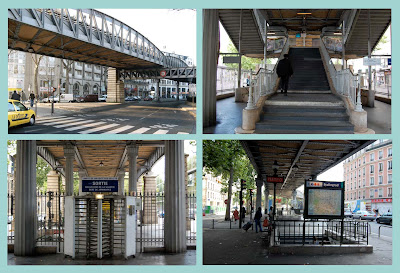