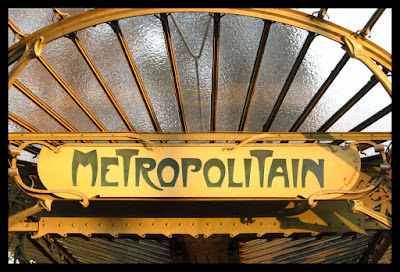 For anyone with recent experience of London Transport, the Paris Métro is a revelation. The average wait for a train during the working day is about 3 minutes. There is nowhere on the entire system where you can be faced with the sort of 20 minute service gap that occurs so often on the Circle Line in London. Trains are clean, brightly lit and spacious when compared with London’s “deep tube” trains. Rubber tyres are employed to produce a much smoother and quieter ride than conventional track. Other novelties include driver-less trains on line 14 and inter connected carriages on line 1 that enable the traveller to walk the length of the train. The Métro was built some 40 years after the development of London’s Metropolitan railway and the French had the advantage of learning from the structural problems that follow when two or more services share the same tracks. All 14 Métro lines are out and back shuttles though a few of them divide in the suburbs to serve more than one terminus. 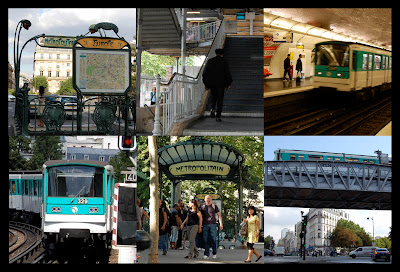 The great age of London Transport (LT) came between the wars when Frank Pick created and developed a design-led network in which all aspects of operation were subject to a co-ordinated design process. In two respects LT achieved standards of excellence that the Métro never did, namely, posters and publicity and station architecture. To be fair to Paris, there are virtually no street level station buildings, access being via clearly signed staircases. The elevated sections are served by undistinguished elevated stations with either platform canopies or all-over roofs. The only areas where design played a significant part were the station interiors at platform level and the signage at the station entrances. There is no other graphic tradition and in the matter of graphic design and illustration for advertising London wins hands down. 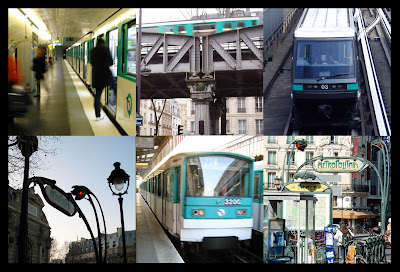 Branding distinction has been achieved by careful preservation of the Art Nouveau derived designs of Hector Guimaud. Some of Guimaud’s finest achievements were destroyed in the years when Art Nouveau bottomed out in terms of public esteem but since the 1960’s the Guimaud heritage has been assiduously cultivated and replicated to the point where it now stands in the first rank of Parisian icons. Organic letterforms and twisting plant-like cast iron structures all contribute. The bizarre candelabras that loom owlishly over many an entrance have an almost sinister presence. Insect-like hooded light fixtures complete the picture. 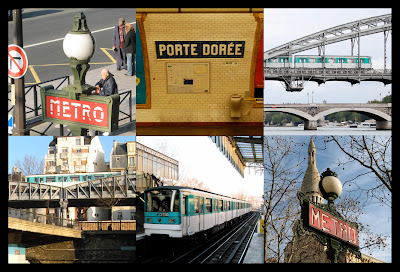 Below street level the station platforms have been graced by a succession of ceramic-based decorative schemes that over the decades have been covered over in pursuit of a more contemporary acrylic-panelling look and then later reinstated and restored to their former glory. There have been a number of prestige projects to develop themed station decor (Louvre-Rivoli, Concorde, Bastille, Assemblée Nationale) but in central Paris at least, ceramic tiling remains the order of the day. The holy grail for connoisseurs of Métro architecture is the long closed station of Saint-Martin where a series of hoarding sized ceramic tiled advertisements have survived intact from the 1940’s. Urban Explorers have penetrated the security to gain access and photographs of their discoveries can be seen by following this link. 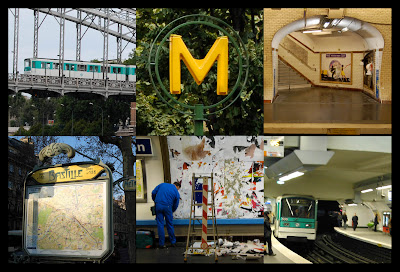 I have enjoyed reading your observations of the Paris Metro. I always love that first ride on the metro when I am in Paris. I am not sure "London wins hands down" for graphic design though. The underground map is not drawn to scale which makes it look nice, but can pose problems for the traveller. At times it can be more efficient to walk between stations in London verus taking the tube.

Thank you for your comment. When I made a claim for London's graphic supremacy I was thinking in heritage terms of the wonderful posters that LT produced in the past. The Métro simply has no poster tradition. Also there's no Parisian counterpart to the London Transport Museum. I take your point about maps and the RATP website is vastly superior to the Transport for London site which has nothing remotely as useful as Le Plan Interactif!