This image is from the first decade of the last century. It shows the vast industrial complex created by the American Locomotive Company (Alco) at Schenectady and comes from a time when the success of a business could be measured by the volume of atmospheric pollution. More than thirty smokestacks are actively discharging black smoke into the upper air. Mass production of steam locomotives was a brutal and thunderous affair of hammering, forging, welding, smelting and riveting. Colossal quantities of minerals and fossil fuels were consumed in the process. The two-point perspective rendering is designed to convey a sense of scale and permanence. Built for eternity, production ceased in 1969 and most of the workshops no longer exist. 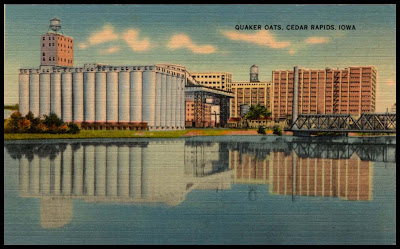 In the era of the Linen Postcard a new factory aesthetic emerged. Prefigured by Charles Sheeler in his paintings of the Ford plant at River Rouge (Classic Landscape, 1931), clean geometric lines and simplicity of form began to predominate. The Quaker Oats factory presents an idealised vision of this aesthetic with maximum glazing and repetition of forms. The Dixie Cup factory offers an even simpler profile with not a smokestack in sight. The giant Dixie Cup perched on the roof is a nice vernacular touch. This reductive process persists to the present to the point where most industrial production has been shifted off-shore to the Far East and China where it is completely invisible to those of us in the West who buy the products. 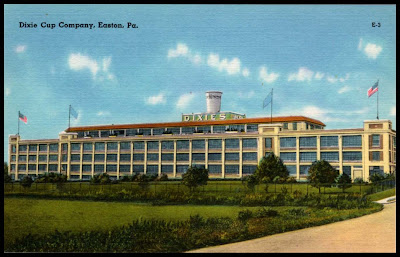