Fear and Loathing in the Art World 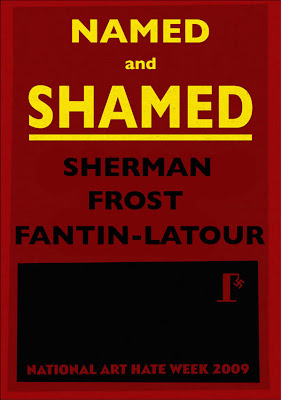 Great news for professional iconoclasts – National Art Hate Week is upon us. The first of what we must hope will be many such events. Perhaps in time there’ll be a telethon in which Terry Wogan can tearfully appeal on behalf of those whose lives have been ruined by exposure to art. The trick is to make the most sophisticated list of artists to despise to reflect well on the person doing the hating. There’s an over-dependence on the use of the name of Tracey Emin who despite her gradual evolution into pantomime dame and national treasure remains an all too accessible object of loathing. This really needs some thought and a list of potential candidates.

Fifteen candidates from which to choose, some of whom are over qualified and others who are embarrassingly inoffensive. In the end the decision goes to the following. Terry Frost, for cheerfully repeating himself for decades and for an indecent display of energy in old age. Fantin-Latour, for his pompous group portraits of self-regarding Parisian artists, poets and intellectuals. And Cindy Sherman, for being Cindy Sherman ad nauseam. I do believe I’m getting into the spirit of this thing. 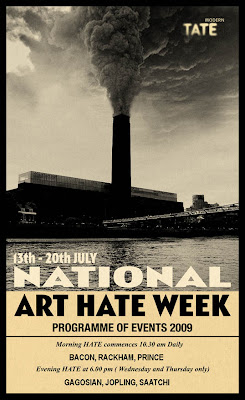