Postcard of the Day No. 34, Vanished Leeds 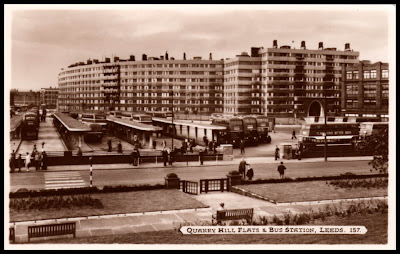 By the time it was completed in 1941, Quarry Hill Flats was the largest such development in England and was home to 3,280 citizens. The city planners had sought inspiration in the 1930s by visiting the Karl Marx Hof in Vienna and La Muette at Drancy (northeast of Paris, later infamous during the Occupation as the reception point for Jewish deportees en route for Auschwitz). The provision of communal laundries, kindergartens and a waste disposal system was not enough to overcome the traditional English antipathy to high-density living and the flats were demolished in 1978. A large office block occupied by the Department of Work & Pensions / Department of Health now stands on the site. This postcard includes two features that no longer exist in Britain. Local authority housing schemes and municipally owned and operated bus services are both a thing of the past. All these services have been transformed since they became the responsibility of private enterprise and the monopolistic uniformity of the corporation bus has been replaced by the monopolistic uniformity of Stagecoach, National Express and First Bus. 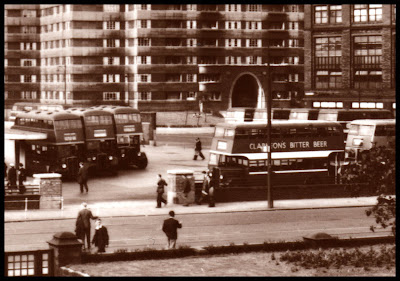