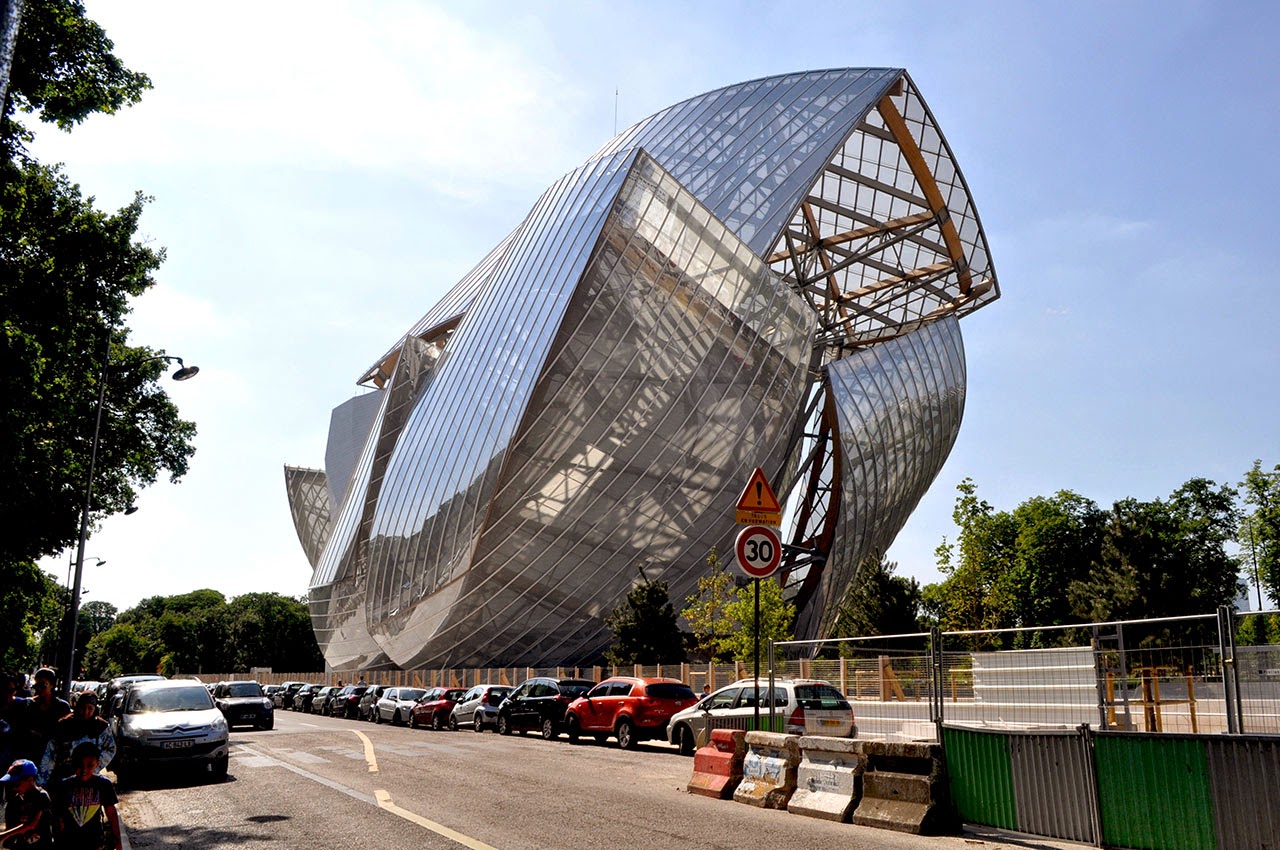 After 6 years in construction the Fondation Louis-Vuitton opened in Paris at the end of last month. A landmark building on the edge of the Bois de Boulogne designed by “starchitect” Frank Gehry it marks another step in the convergence of the visual arts and commercial branding. The intention is to showcase the vast contemporary art collection assembled by Bernard Arnault, Chairman and CEO of LVMH, owner of the following brands (among others) Christian Dior, Givenchy, Marc Jacobs, Moët & Chandon, Dom Pérignon, Veuve Clicquot, Hennessy, Glemorangie, Guerlain, Kenzo, Bulgari, TAG Heueur, Bon Marché, la Samaritaine, Séphora plus 10% of Carrefour supermarkets. It sounds like a store listing for a Dubai shopping mall - an awe inspiring basket of products most of us will seldom if ever purchase. But if we concede that the Tate Gallery was built and endowed on the proceeds of sugar and slavery then fashion, fragrance, wine, spirits and retailing doesn’t sound quite so bad. There’s not much in it - the rarefied world of haut couture is said to bring glamour and excitement into dull and tedious lives but by the time its innovations have filtered down to the consumer their main value seems to be a device for persuading the insecure and style conscious to replace their perfectly serviceable clothing with a new season’s offer. It’s fair to say that the fashion industry is a colossal engine of waste and a world leader in outsourcing labour to wherever is cheapest and free of tiresome regulation. 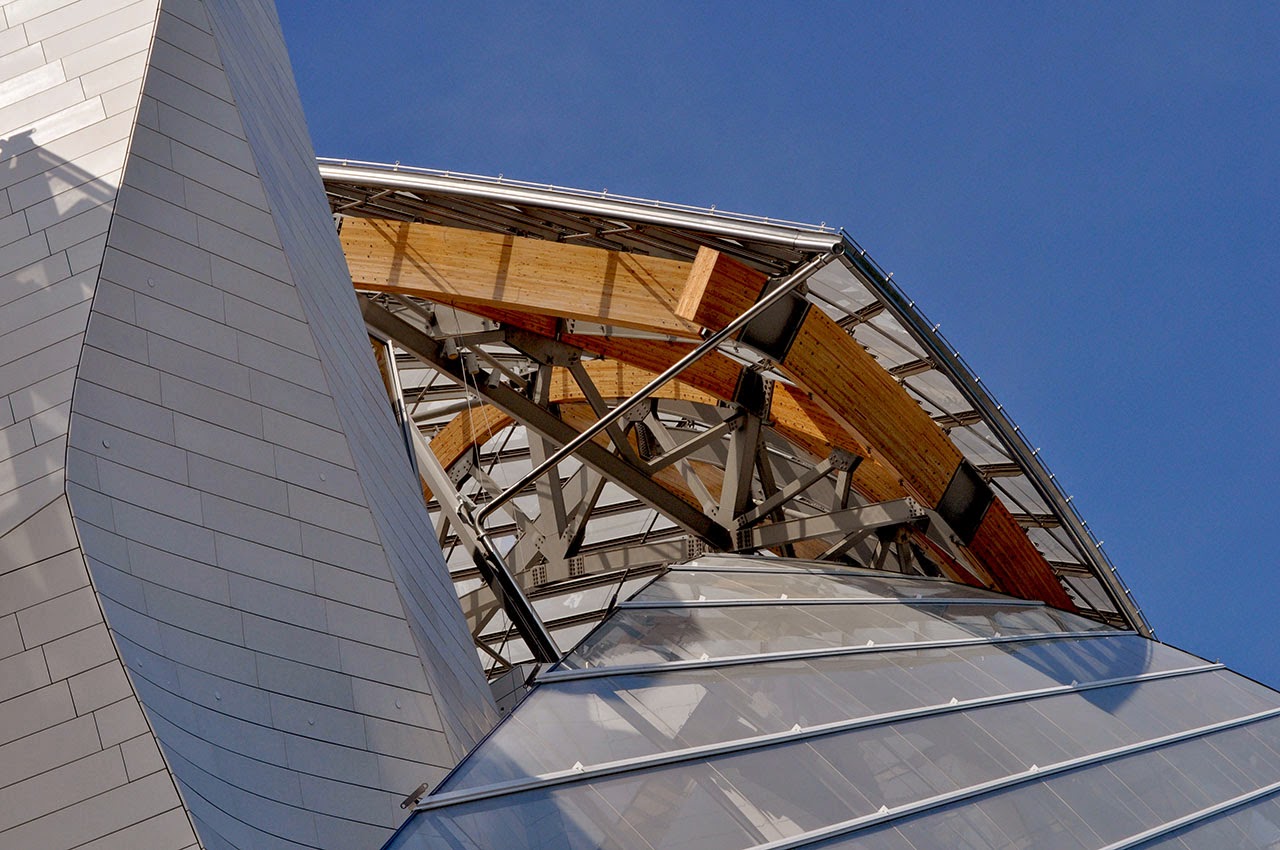 It’s never a pretty sight watching the moguls of capitalism indulging their vanity projects and this promises to be no exception. Gehry has claimed that his inspiration came from the ferro-vitreous splendour of the Grand Palais and the Palmarium glass house in the adjacent Jardin d’Acclimatation (itself a part of the LVMH portfolio) but in a vainglorious exercise in creative arrogance the visual coherence of his sources has been discarded in favour of an assemblage of dismembered fragments. Over 3,500 glass panels, every one different, are locked together by an amazingly complex armature of braces, struts, brackets, clamps, trusses and engineered timbers designed by robots using specially designed software. We are invited to see the resulting segments as vast sails, bringing to mind an image of a stately vessel, gliding above the trees, powered solely by the gentle zephyrs. Photographs suggest that this harmonious vision may just be obtainable from a select few high-altitude viewpoints but for the earthbound majority it will remain a baffling cluster of tumbling forms. When I examined my own photographs (taken in May 2014) of which there were many I realised that I’d been searching for some point of balance or compositional integrity and dismally failed to find any. 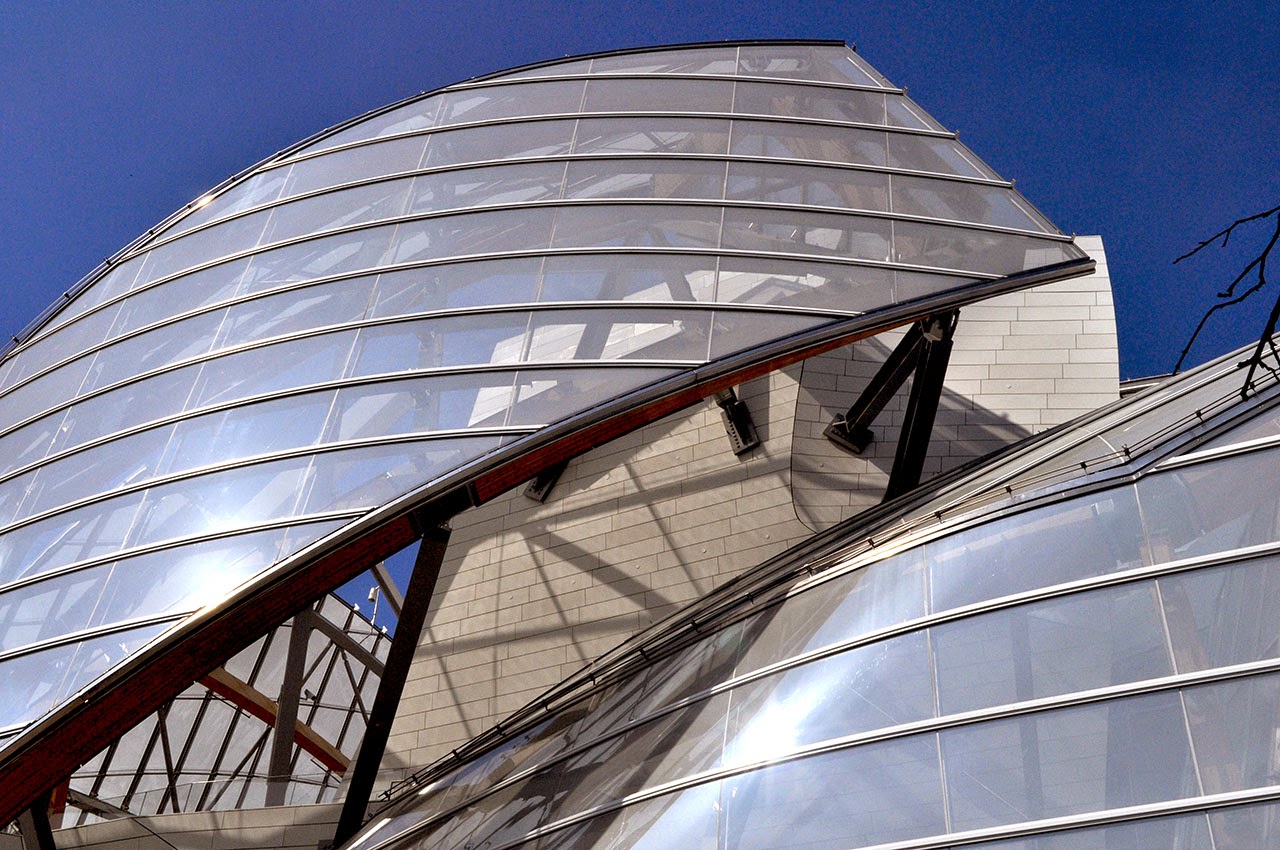 I would much prefer to be applauding the results of all this technological ingenuity and investment in space for the visual arts but the overwhelming egotism on display offers little inducement. There’s no shortage of reactionary critics ready in an instant to condemn anything outside their personal preconceptions but that’s the company you are placed in if you express reservations about Frank Gehry. As for the art, I don’t know whether to be pleased or dismayed that two artists I much admire (Ellsworth Kelly and Christian Boltanski) are among those chosen to make signature artworks for the inauguration. On balance I should be pleased, especially for Kelly, still productive at the age of 91. I suspect it won’t be long before the egregious Koons puts in an appearance but then only the super-rich like M. Arnault can have museums dedicated exclusively to their own personal taste. After 55 years, in 2069 the building becomes the property of the City of Paris, by which time the art will be made by robots for an audience of robots unless it has been repurposed as a Mosque in the North European Caliphate. 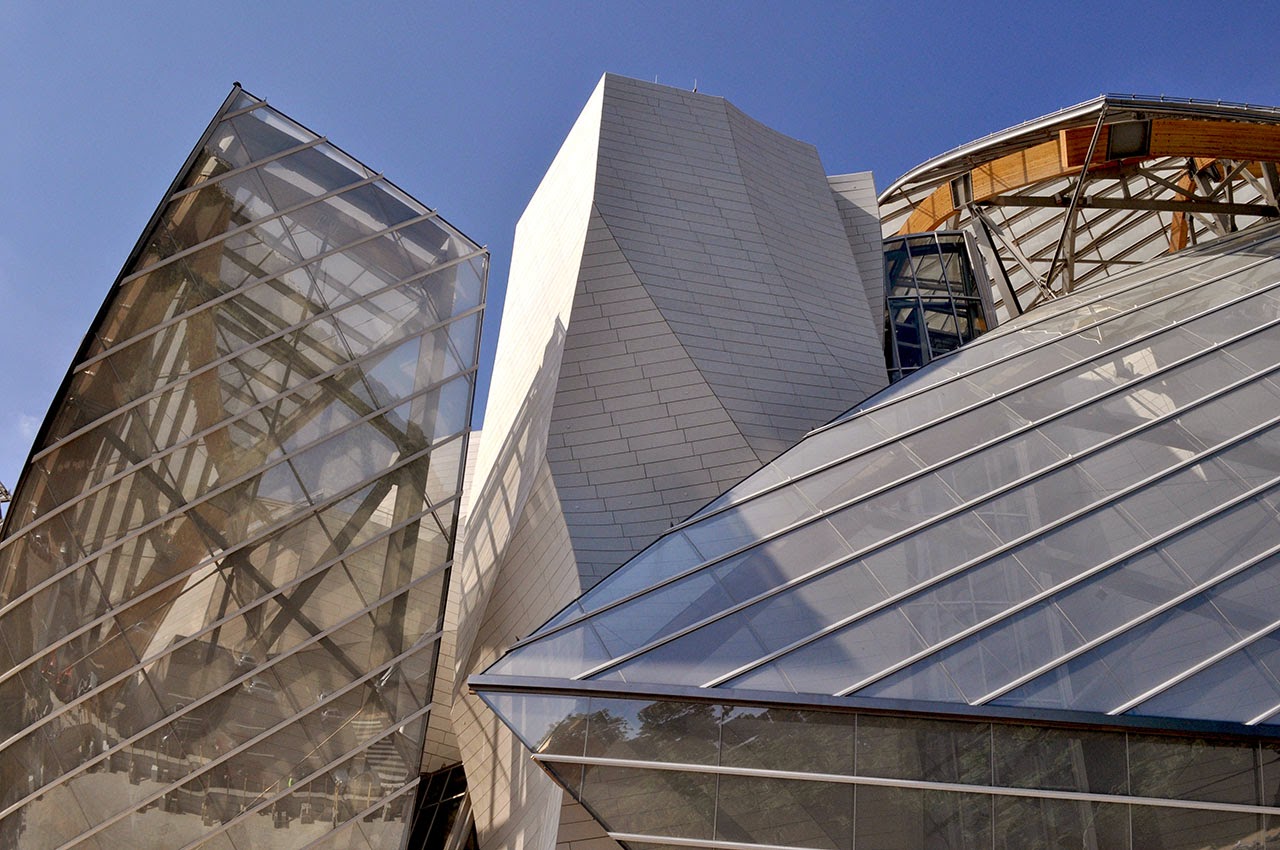 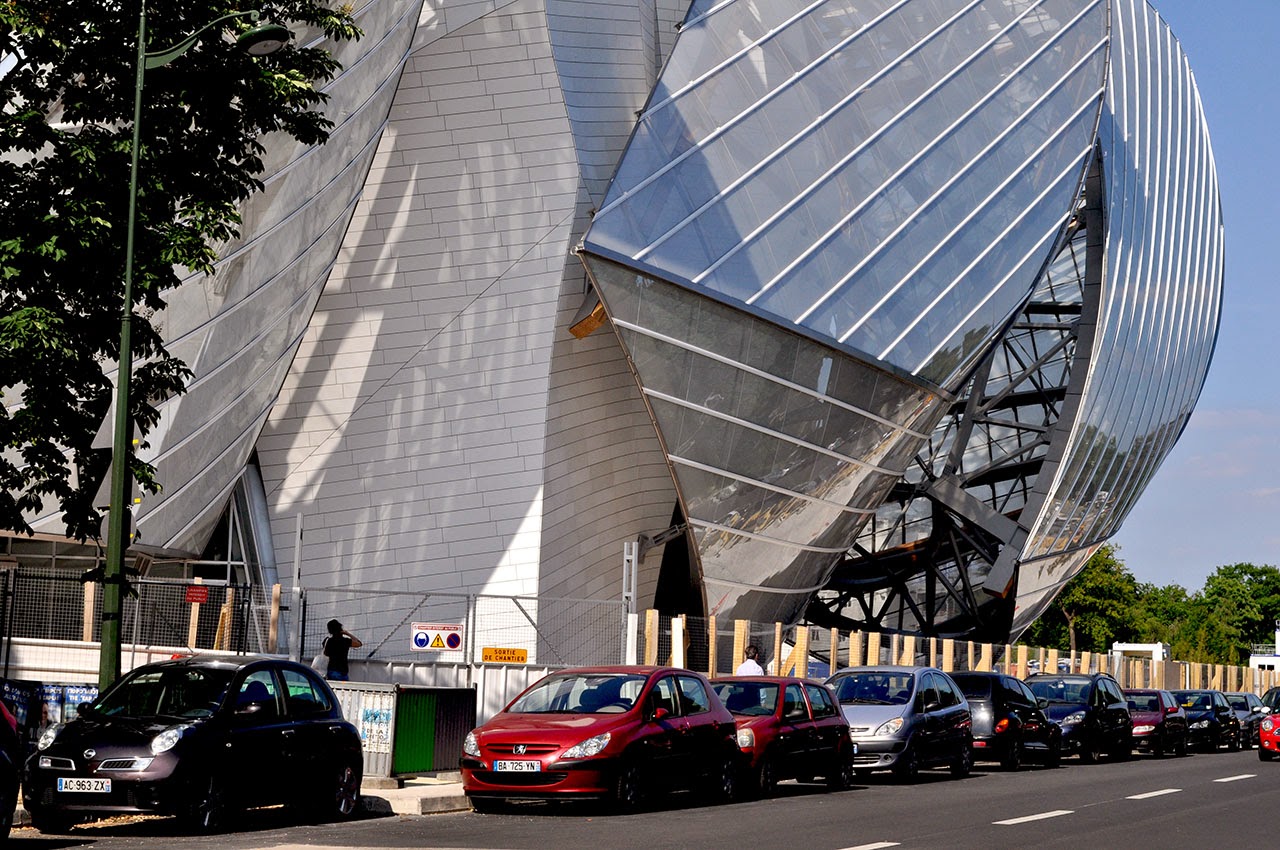