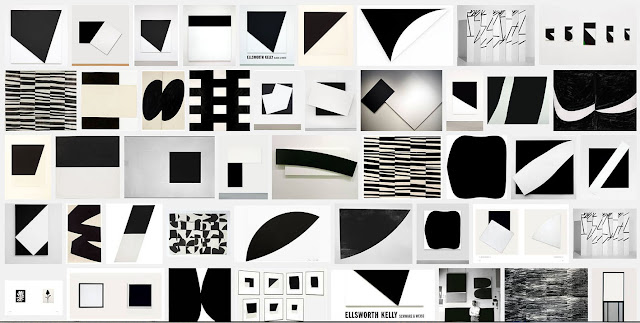 It wouldn’t seem right not to mark the passing of Ellsworth Kelly, who died yesterday. I was still a schoolboy when I first saw his painting Broadway (1958) hanging in the Tate as a new acquisition. I recall that I had just subjected myself to the dubious delights of a Francis Bacon retrospective in which I had struggled to find any merit. So the clarity, simplicity and starkness of Kelly’s image was a cleansing experience and the start of a lifelong interest in his work. The early 1960s was the high point for Abstract Expressionism and Kelly’s work was clearly not part of that. Nor did it have anything in common with the Pop Art of the mid 1960’s. There was a misleading and superficial resemblance to late 1960s Minimalism but Kelly was following his own path and his inspiration came from a very different place to that of say, Donald Judd or Carl Andre. Six years of living in Paris made Kelly an object of suspicion in the nationalistic fervour of a New York art scene swaggering with pride at its newly acquired status as global capital of the visual arts. Kelly made no secret of the fact that his abstract images had links to perceptions of the natural world and the built environment, placing him at odds with the prevailing Greenberg orthodoxy of an abstraction that lived by its own autonomous rules and rejected any linkage with banal reality.

Kelly was never quite an All-American artist – there was greater affinity with the work of Max Bill or Jean Arp than with Barnett Newman or Clifford Still. That often lead to an assumption that his was a European sensibility, for which, read effete and over sophisticated. It makes more sense to consider his work on its own terms without attempting to allocate it to one tradition or another. Indeed much of its power to attract lies in the independence of the artist and his resistance to categorisation. The 1997 Tate exhibition was one of the most exhilarating retrospectives I ever saw. A magnificent display of stilettos and wedges of intense flat colour, appearing to float, orbit and detach from the enormous canvases to which they were tethered. Move in close and your vision is dominated by vast slabs of colour, separated by the sharpest of contours, step back and the massive forms become weightless and mobile. Precise, controlled, fastidious to a fault – that’s more than good enough for me.