Postcard of the Night No. 12 – Barbary Coast by Night, San Francisco 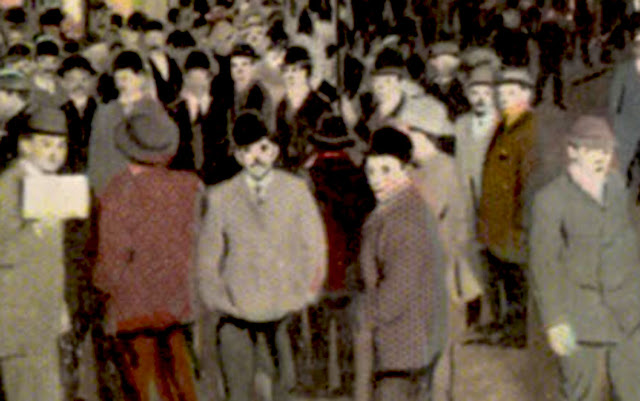 Barbary Coast was the red light district of San Francisco. It sprang into existence in 1849 with the California Gold Rush and for 60 years or more its nightclubs and brothels, bars and gambling dens catered to the needs of an itinerant population of workingmen in search of distraction. Our postcard from the first decade of the 20th. century shows a pilgrimage of lost souls, their haunted faces turned toward the camera – an unwanted intrusion into the pursuit of pleasure. Some furtive, some remorseful and some defiant, they shuffle through the gloom to be separated from their hard-earned dollar bills in return for copious quantities of intoxicants and sexual favours. The agencies of law and order had minimal traction in the district and organised criminal gangs threatened the security of the entire city. Conflict raged with regular arson assaults on the city leading to vigilante justice and public lynchings. It couldn’t last forever – the 1906 earthquake provided the opportunity to rebuild and gentrify the district. The guardians of public morals kept up the pressure on the civic authorities and a few years later a new hostility emerged with a ban on dancing and illuminated signs, restrictions on the sale of alcohol and the expulsion of brothels. 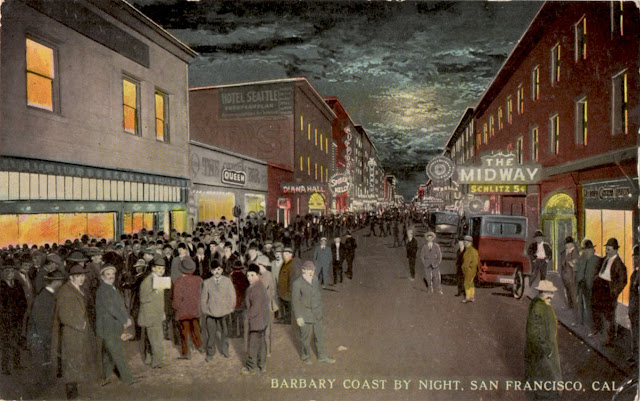