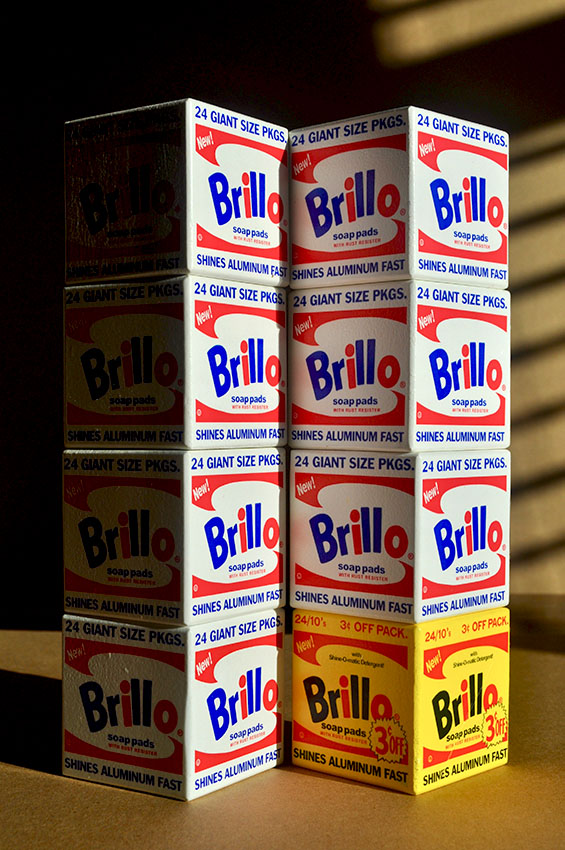 In 1964, Andy Warhol got his assistants to make full-scale wooden replicas of the cardboard cartons used to ship Brillo pads to shops and supermarkets. When complete, they were silkscreened to resemble the original boxes in every detail. The same process was repeated for cartons of other consumer products by Kellogg’s, Motts, Heinz, Del Monte and Campbells. The finished boxes were all assembled in April for an exhibition at the Stable Gallery. When the Manhattan sophisticates turned up for the opening they were confronted by a room where nothing hung on the walls and the floor was stacked high with facsimile cartons of the sort that would never merit a second glance unless you were a shelf-stacker. Visitors had to pick their way with care through the scattered exhibits and soon discovered they no longer had the space in which to cluster and share art world gossip and banter. The popular conception of a private view audience studiously ignoring the work on the walls in favour of free drinks and an exchange of insults suddenly became unavailable. Despite being priced between $100 and $200, sales were disappointing – it seems that Warhol had succeeded in discomforting his core audience as well as raising all sorts of issues about appropriation, authenticity and aesthetic value. 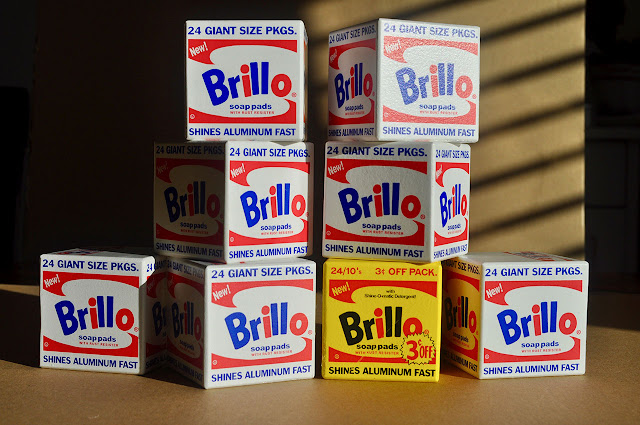 While critics argued over whether or not the boxes were artworks, a commercial artist named James Harvey questioned Warhol’s ownership of the Brillo pack by announcing himself as the designer of the original Brillo carton. Harvey and Warhol were near contemporaries, both of whom had subsidised their fine art ambitions by accepting commercial work. They differed only in their personal choices – while Harvey aligned himself with the serious-minded traditions of Abstract Expressionism, Warhol launched himself in the opposite direction. In 1964 it was Harvey who looked like an anachronism, although his work is not entirely lost to the world – his 1963 design for the Marlboro cigarette pack survives, with minor modifications, to the present day. 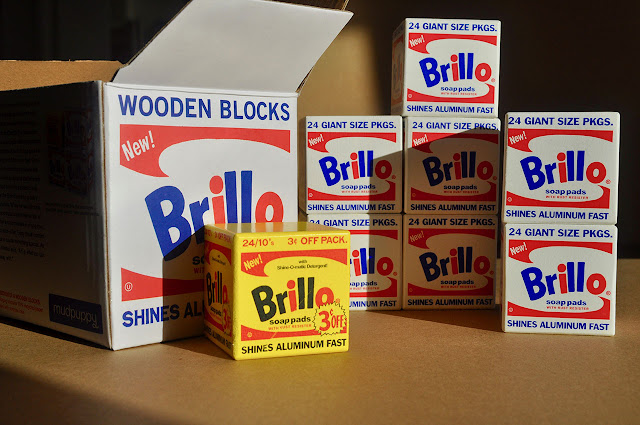 I’ve enjoyed Robert Hughes’s magisterial diatribes denouncing Warhol as a meretricious fraud but I’ve never been fully convinced he can be dismissed so lightly. During the 1970s Warhol’s Factory aesthetic rapidly metastised into a sinister driver of celebrity culture but the earlier output had many interesting things to say about consumer culture and the hidden power of the image. I’m less squeamish than Hughes (which is to say my critical standards are not so high) and I’m not offended when the artist’s handiwork is outsourced. The artist as venture capitalist, self-publicist and manager of his or her own image rights may be a little unsettling but it’s nothing new. Where Hughes sees a dangerously value-free void I see a complex character replete with unresolved inner conflicts that largely don’t concern me. Warhol, for Hughes, is the person most responsible for flattening the distinction between high art and the endless noise and turbulence of popular culture. He is amusingly dismissive of Andy the Silver Angel of Death and unimpressed by the images of death and violence that distinguish some of the early silkscreen paintings – car crashes, race riots, electric chairs – that wealthy patrons paid large sums to display in their gated apartments. Hughes must have taken a sardonic pleasure in reading about the proliferation of fake Warhols and the interminable disputes over attribution. 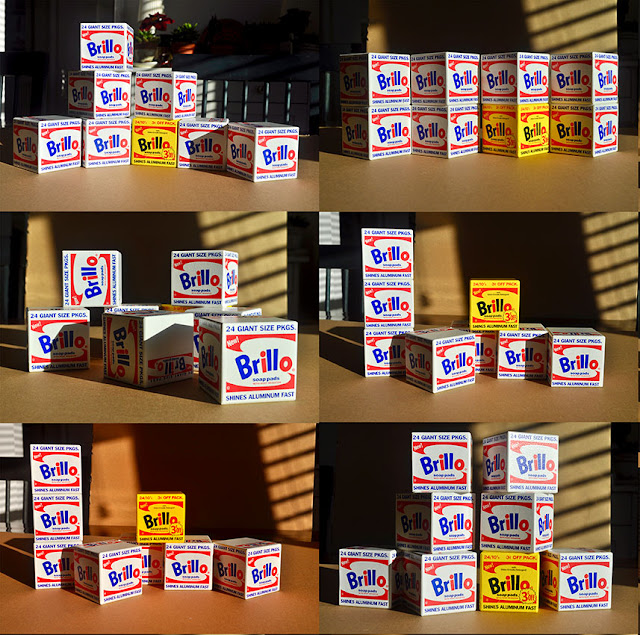 Which brings us to the wooden building blocks in the form of miniaturised Warhol Brillo cartons that went on sale last year in packages of eight, seven of which featured the standard pack while the eighth was a replica of the 3¢ Off variant in yellow. A wonderful opportunity to start your own table-top art museum and arrange the boxes in a deeply personal way. In a helpful note to the purchaser we are reminded that Warhol once said, “Art is what you can get away with” – just the sort of thing to have Robert Hughes turning in his grave. A 2016 documentary film, Brillo Box (3¢ Off) tells the story of a single box and its 40+year journey through the art world, accruing value at each change of ownership until it maxes out at $3million.