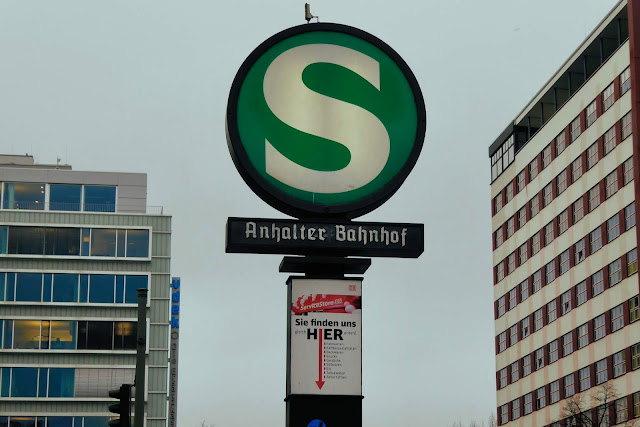 More properly, this is a former station with surviving remnants. Once it was Europe’s largest station offering luxury train travel from the capital to Frankfurt, Leipzig, München and Dresden. Initially it was a casualty of war – massive bombing raids in 1943 and 1945 brought it to the brink of ruin. After some post-war patching up it was partially functional but by this time it was in West Berlin serving destinations that were almost all in the Deutsche Demokratische Republik (DDR). In 1953 the DDR redirected trains to the Ostbahnhof in the Eastern Sector and the Anhalter-Bahnhof was empty and abandoned. All but the central section of the facade was demolished in 1960. Most of the derelict land was repurposed although some melancholy remains of the platforms can still be seen close to the Landwehr Kanal. 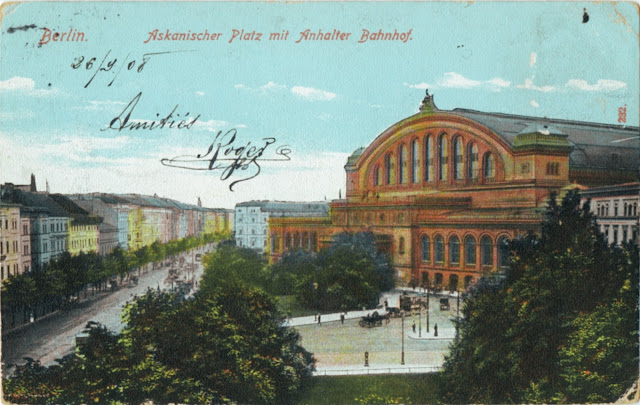 The grandiose, monumental design for the station was an early work of Franz Heinrich Schwechten (1841-1924) – it had the illusory air of a building planned to last at least 500 years. Construction began in 1872 at a time when Prussian nationalism was riding high following the humiliation of France in 1870-71 and both the Kaiser and Bismarck were present for the opening ceremony in 1880. The main entrance was topped off with a pair of zinc reclining figures, allegorical representations of Day and Night. Modern replicas have replaced the originals which are now on display in the Deutsche Technikmuseum. In the days when wealthy passengers could access the Excelsior Hotel via an underground passage, the Anhalter cultivated an air of exclusivity with an architectural grandeur to match. 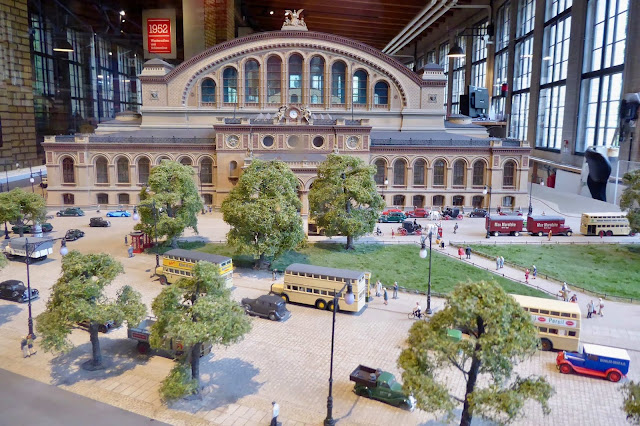 Albert Speer’s plan for Germania centred on a new north-south boulevard to be known as the Prachtallee (Avenue of Splendours). The chosen route would have severed the tracks running into the Anhalter-Bahnhof and it was decided to close the station – Speer’s preference was to make it the site of a new swimming pool. None of that happened and when the station finally closed in 1953, there was a proposal to convert it into a museum of transport. Another scheme that failed to materialise. 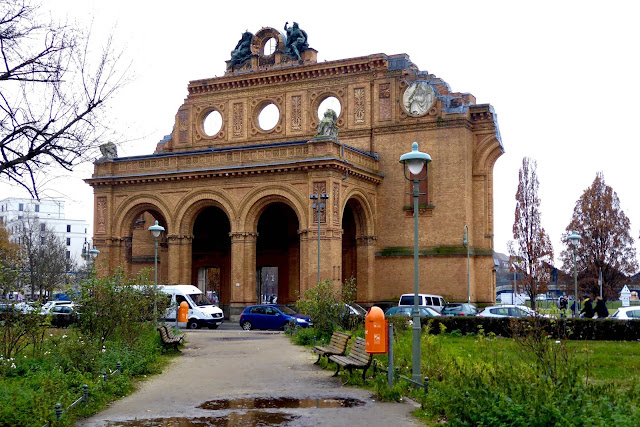 The splendid scale model of the station environs was photographed in the Deutsche Technikmuseum and offers an idealised portrait of the station forecourt in the 1930s. It can easily be compared with the reality of the fragmentary ruins that are little more than 10 minutes walk away. Somehow these ruins embody two contrasting aspects of German culture. The building was conceived as a bombastic statement of Prussian militarism, while the ruins serve as a recognition that the station played a key role in the deportation of Berlin’s Jewish population, a cause of national shame that has to be acknowledged and memorialised. A reminder of how problematical it can be to read architecture in this way comes in this quote from Axel Foehl writing in Great Railway Stations of Europe (Thames and Hudson, 1984) describes it thus, “a small pile of rubble for which it was no longer possible to feel any emotion...” 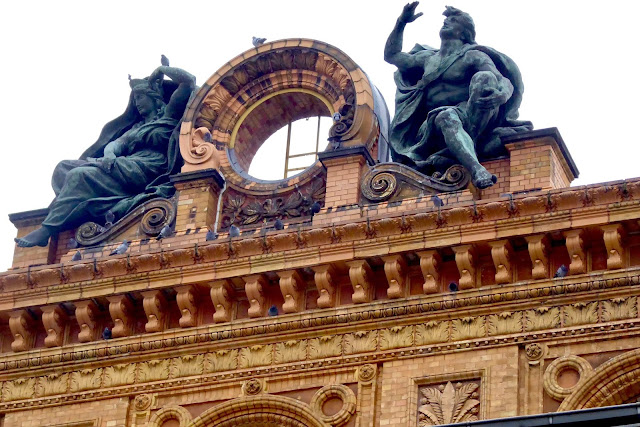 Follow these links for previous posts about the Anhalter-Bahnhof and the Excelsior Hotel. 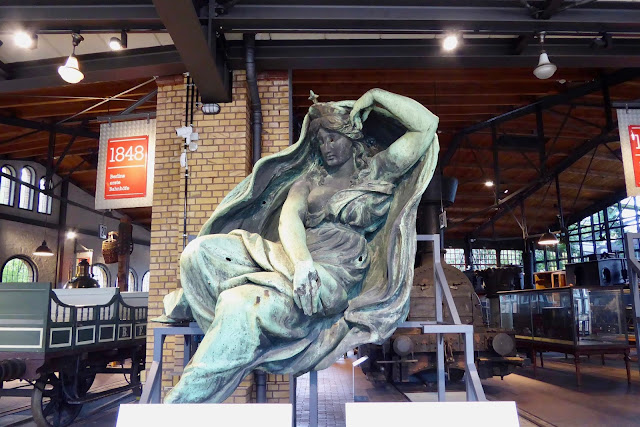 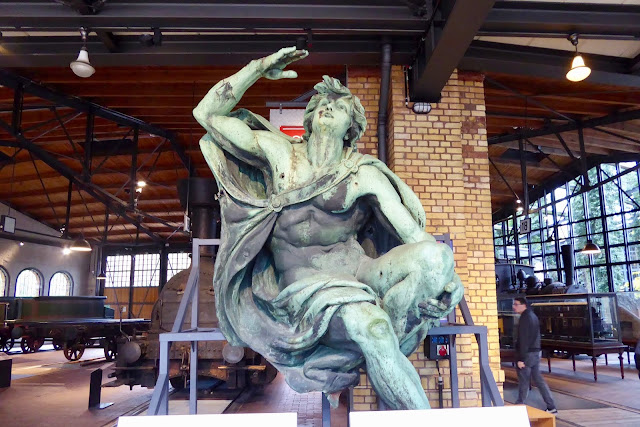 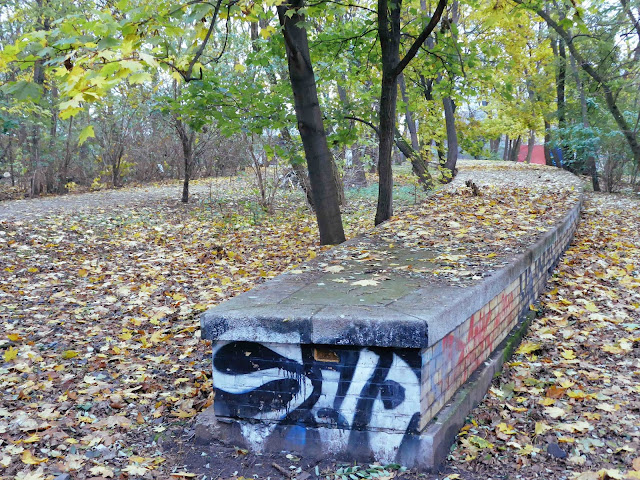 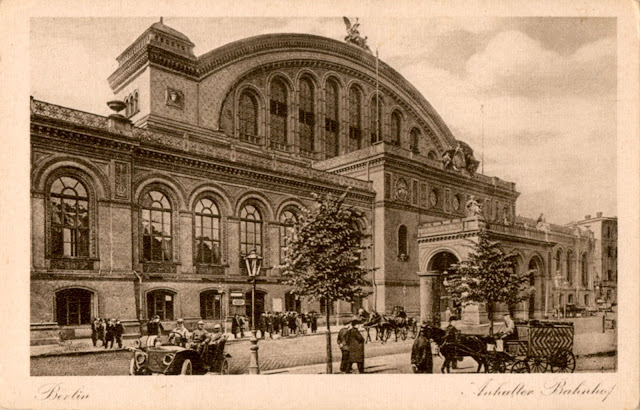