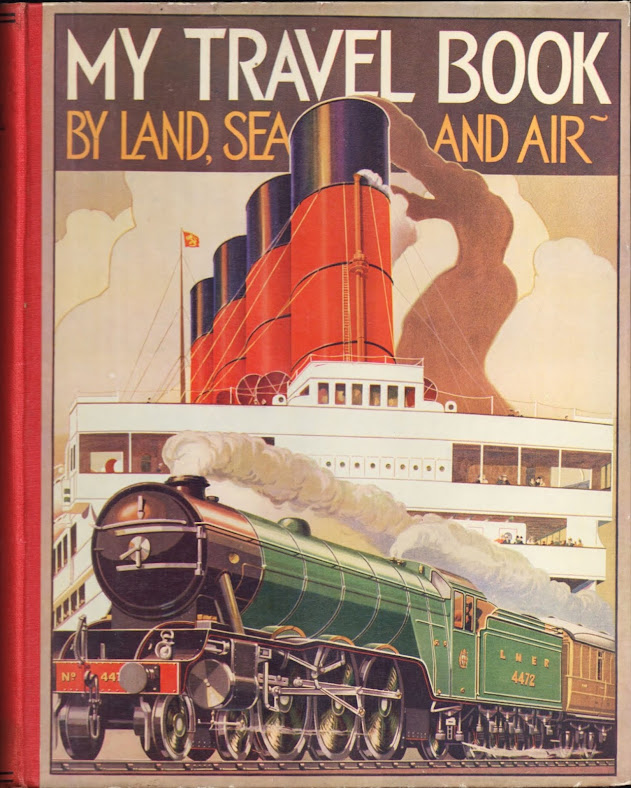 Middle class children growing up in the first half of the last century could be assured that at least one of their Christmas or birthday gifts would be a children’s annual. Many of these formulaic publications offered gender specific entertainment in the form of short stories of little merit but much moral instruction. Others aspired to be educational, dealing with subjects commonly thought to be healthy pastimes or appropriate studious topics. A diet of lawn tennis, nursing and dog grooming was provided for girls while boys could indulge their fantasies about imperial adventure among primitive tribes, every kind of excellence on the sports field or testing their skills at the wheel of a sports car. In turn the concerned parent or relative could depend upon the absolute avoidance of vulgarity on every page. Their characteristics are succinctly described by Chris Mullen at Visual Telling of Stories - his conclusion that the reading experience was a long downhill journey from the gaudy attractions of the brightly coloured boards, via the frontispiece and some dull explanatory text all the way to a series of increasingly nugatory illustrations in pen printed on the coarsest of paper stock, holds good for almost every example. Fractious and ungrateful children would actively resist these attempts to nurture their intellects and avenge themselves by drawing and scribbling across the pages in colour pencils, pens and wax crayons. Their sense of satisfaction with their efforts would only have been intensified if they had been around decades later to witness the fury their vandalism would arouse in the hearts of bookdealers as they saw their margins evaporate at the sight of a single overwritten page. 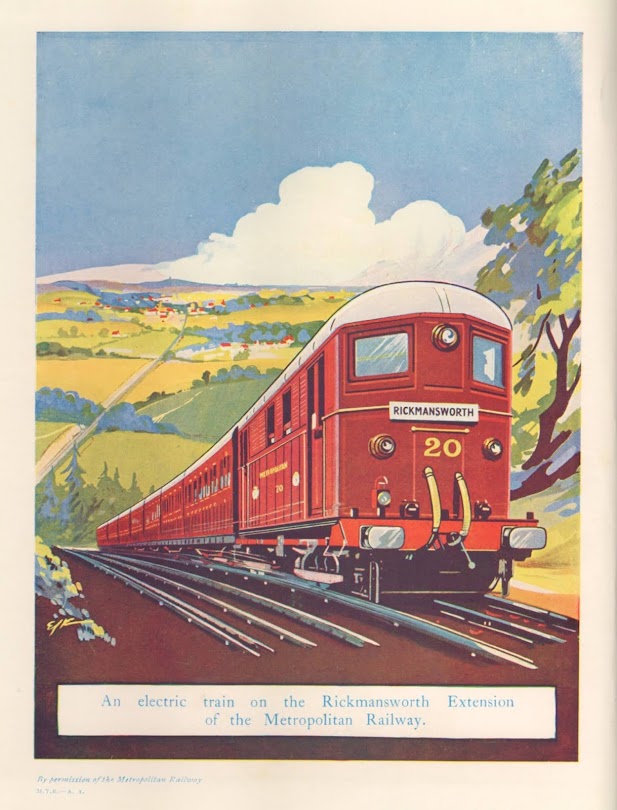 Today’s example, My Travel Book is no exception to the general rule. The cover illustration is a triumphant success in grabbing attention - precision in drawing, thoughtful graphic simplification and vibrant colour, all making for a dynamic composition. The repetitive rhythm of the ship’s funnels pushes its way up into the text block while the diagonal energy of the onrushing train is a thrilling visual counterpoint. Hand-drawn lettering gives the design a distinct flavour of Thirties art deco - especially in the second line where the up-stroke of the uppercase A rests on the baseline of the L and E. The journey into the book is a slow decline - the frontispiece (a Metropolitan Railway electric train) is a fresh and breezy evocation of the sunlit hedgerows and hills of Metroland. Next is a cutaway drawing of the inner workings of a similar locomotive, lacking the annotation that might have led to greater understanding. There’s a further dip when we come to the anecdotal illustrations of a country station platform bearing the signature of Savile Lumley (1876-1960), a stalwart of the children’s annual. The colour is insipid, the trains are generic but the accessorising of the upper middle class children is well observed and it’s pleasing to see their confidence in addressing the lower orders. There are two further shipping-related colour plates, sloppily drawn and coloured by the same casual hand and the book peters out with a few desultory pages about airships and bi-planes. 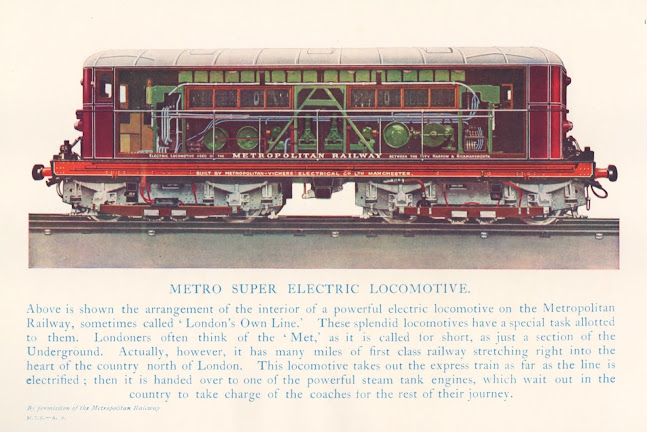 The pictorial excursion into Metroland is another excuse to write about this book - I’m old enough to have travelled behind these electric locomotives in the early 1960s from Rickmansworth, where home was on the Cedar’s Estate, into Baker Street and beyond. The locomotives were built by Metropolitan-Vickers in 1922-23 and soldiered on until 1961 when electrification reached Amersham and new build trains replaced them. Such visual charm as they possessed lay in their anachronistic appearance, reminiscent of bulky pieces of Edwardian furniture from Waring and Gillow. Their duty had been to convey a pin-striped army of bankers, lawyers, company directors and bureaucrats from the pastures of Metroland to their dusty offices in the City and West End. Observing these creatures on their daily migration could be rewarding, especially the lengths to which they would go to avoid acknowledging the existence of their fellow travellers. Many had been born in the reign of Queen Victoria and survived two world wars. Fraternisation with strangers would have compromised their natural reserve - anyway there were pipes to be smoked and crosswords to be completed. Seating was arranged in separate compartments with no internal corridor, something that commended itself to Metrolanders of a predatory disposition whose victims could only escape unwelcome attention by hurling themselves on to the tracks at high speed. 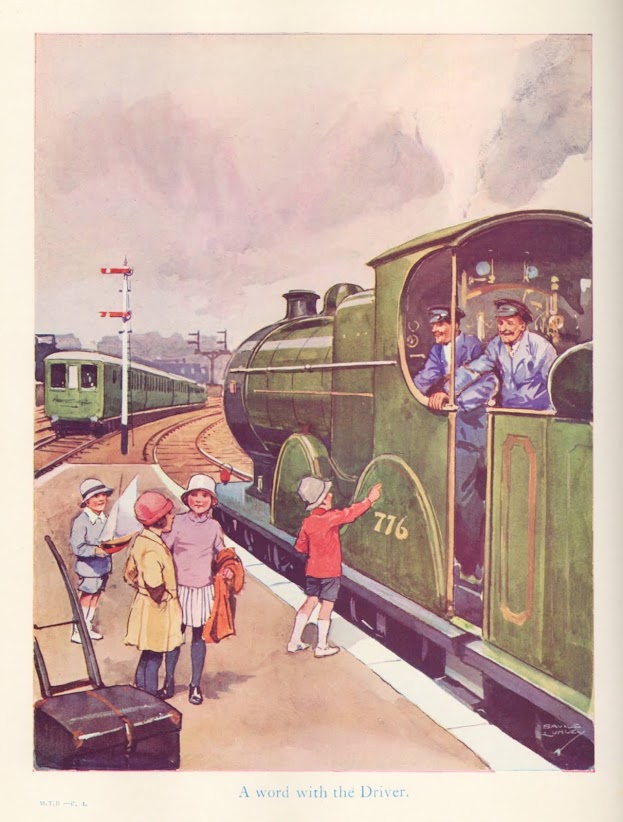 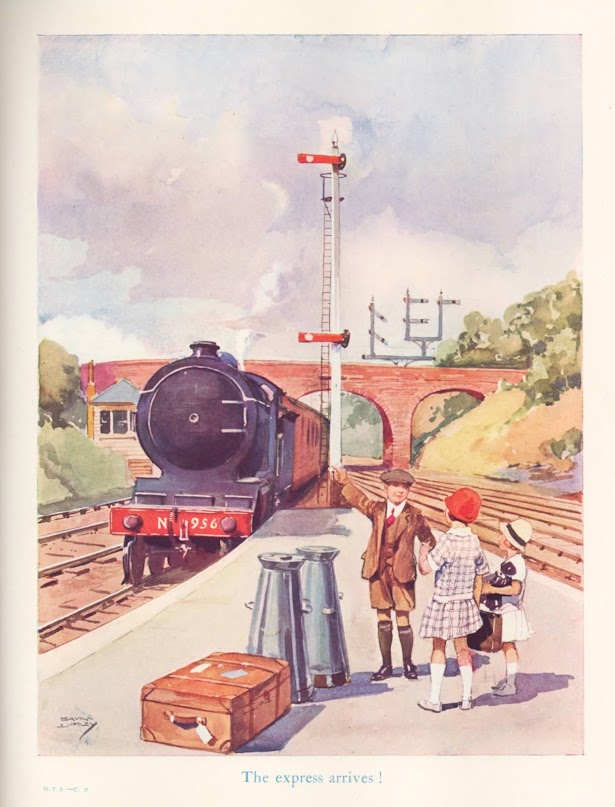 Move on from 'My travel book' a couple of decades and here's another book for children. This one for a younger age group and any scribbling on the pages would have been in a very flamboyant style, the art of carefully drawing smoke coming out of every chimney and a moustache on every male face in a book was to come in a few years:
https://westread.blogspot.com/search?q=out+with+mummy

I suspect Anne and John might have become victims of the counter culture in the Seventies but it made zero impact in 1968. As you say - it's still 1955 at the airport. Mummy got off lightly when the milk ran out!