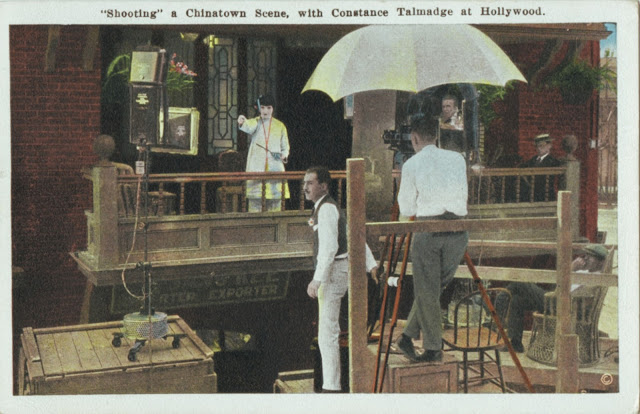 Constance Talmadge (1898-1973) was a star of the silent screen who made her mark in 1918 when she appeared in D W Griffith’s “Intolerance” but her days in front of the camera would be relatively brief.  With the advent of sound in 1928 she retired in favour of making money from real estate. A handful of crew plus an umbrella and some auxiliary lighting seems to be enough. The movie is identifiable as “East is West”, made in 1922 with Constance playing the part of Ming Toy. Ming escaped from the notorious Love Boat in Shanghai only to find herself pursued by Charlie Yong (“Fifty-fifty Chinaman”) in San Francisco's Chinatown where she was again threatened with white-slavery. Straight arrow Billy Benson saved her from a fate worse than death for the second time. History doesn’t record much about the audience response but the movie had been judiciously calculated to feed into contemporary fears of all things oriental as represented by the Yellow Peril and it would be a disappointment if all their worst efforts had been in vain. It turned out to be one of Hollywood’s more forgettable movies but the director, Sidney Franklin went on to enjoy a long and prolific career including directing “The Barretts of Wimpole Street” twice (1934 and 1957) employing the same script, word for word, on both films.  According to Imperial Tobacco (see below), Constance was noted in Hollywood for her inexhaustible supply of “pep”. 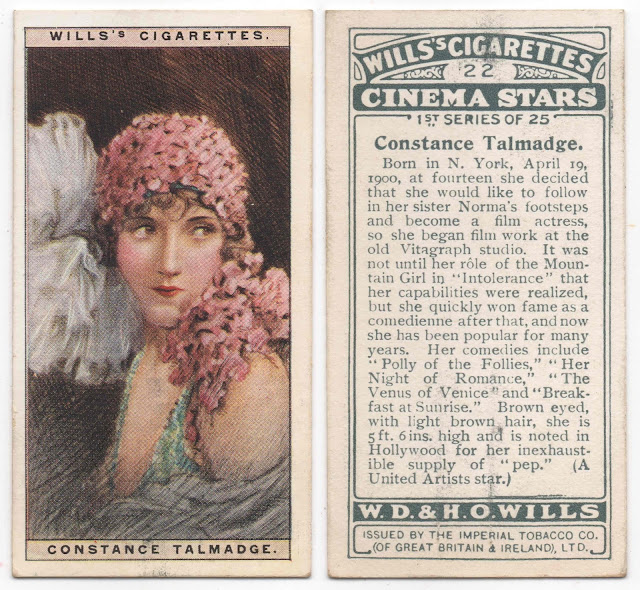