Postcard of the Day No. 3 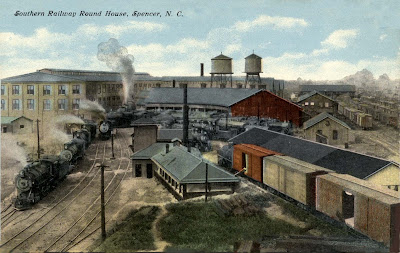 This card shows the locomotive roundhouse of the Southern Railway at Spencer, North Carolina. The town of Spencer was situated midway between Washington DC and Atlanta on the Southern Railway and became the location for a major locomotive maintenance facility. In this image the roundhouse is in the centre and the repair shops are in the background. Although the facility closed in the 1960’s it survives to the present as the North Carolina Transportation Museum. I love this card for its subtly muted colours and because it captures the smoke laden atmosphere of a steam locomotive depot. A characteristic of the Age of Steam is that small towns were often home to implausibly large numbers of locomotives. If the railway arrived before the town it was often the case that the town grew no larger than was needed to service the railway.
Posted by Phil Beard at Monday, June 04, 2007