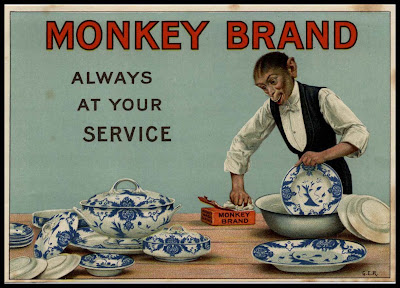 Benjamin Brooke’s Monkey Brand Soap was a typically versatile Victorian product with the capacity to clean almost any object or surface but “It Won’t Wash Clothes”. In an unusual marketing strategy, priority was given to promoting what the product couldn’t do (wash clothes) ahead of what it could do (clean virtually everything else inanimate under the sun). The advertising was dependent on repeated use of line engraved images of a monkey/human hybrid of the type that exercised a powerful grip on the Victorian imagination. This particular simian appeared in a variety of incongruous situations in the interests of selling more soap and made regular appearances in the pages of ‘The Graphic’ and ‘Illustrated London News’. Living creatures in human clothing were the subject of many an illustrated book and their appeal was not restricted to children. Taxidermy tableaux were especially popular with Victorian audiences. The enduring power of this family of images is confirmed by the continuing survival of the PG Tips chimps into the present day. 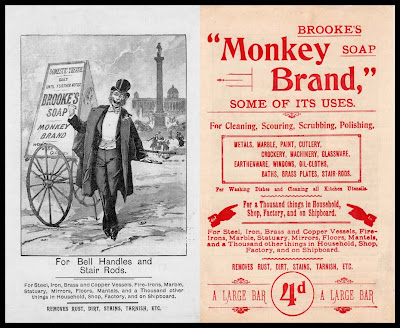 It can be argued that these ads make an equation between the industrious and oppressed Victorian servant class that laboured mightily to eradicate every last trace of dirt and grime from their master’s household and the primitive state of the primate genus. There were several levels to this little jest. Animal forms with human characteristics are inherently comic and a constant source of amusement. At the same time, despotic treatment of servants is legitimised if it can be shown that they are simple primitives and lacking in human feelings. This may seem an extreme interpretation of what appears to be a charming and harmless exercise in fantasy but there is no doubting the power of these images to sink deep into the subconscious and contaminate the mind. These observations and many more are much better expressed by Anne McClintock in a powerful essay, ‘Soft-Soaping Empire’ to be found in “The Visual Culture Reader” edited by Nicholas Mirzoeff. 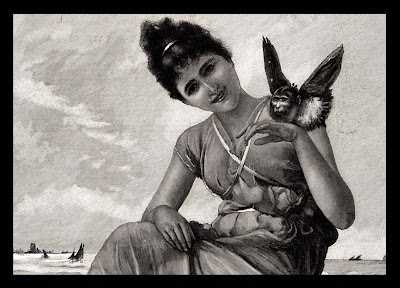 At yet another level, many of these images appear subversive and transgressive in the same way as the Surrealist collage novels of Max Ernst (Une semaine de bonté), created some 40 years later. Conventions are undermined and social norms overturned by the sheer improbability of the imagery. Max Ernst would have been challenged to improve on this astonishing image from 1895 titled “Leisure and her Cherub”. The sultry figure of Leisure tilts her head invitingly and offers us a flirtatious smile and a bizarre avian/simian hybrid winged Cherub which perches on her left hand and glares balefully in our direction. Leisure is seductively clad in a diaphanous toga-like garment permitting more than a glimpse of what lies beneath. The relationship is a little reminiscent of the ‘Dæmons’ that play such an important part in Philip Pullman’s trilogy, “His Dark Materials”. Images of decapitation and amputation are profoundly disturbing; the Cherub appears to be the product of both, being reduced to the condition of a disembodied head that has sprouted wings and tail feathers. Many of our worst nightmares concerning violation to the integrity of the body seem to be condensed into this apparition. So, what were they thinking of? Was this simply a misjudged exercise in humour? Was the demonic character of the Cherub inadvertent and unintended? Or was the artist an admirer of Henry Fuseli and feeling inspired to introduce a gentle note of fantasy into the proceedings? If the intention was to surround the brand with warm and cosy feelings, it cannot be counted as a resounding success. 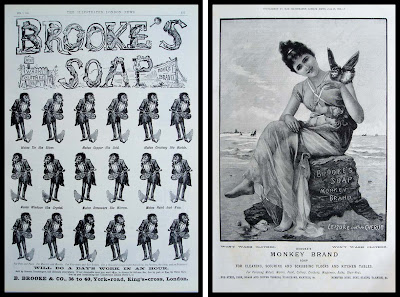 There are other themes to be noted in Monkey Brand iconography. In terms of costume the tendency is to extremes of wealth and poverty. Invariably our simian hero appears as a tatterdemalion or toff; just occasionally he will be wearing the uniform of a servant or sailor. The top hat and tails are mostly for comic effect, to contrast with his menial tasks, such as dragging some mobile advertising or pushing a wheelbarrow through the city streets. He is exposed to a wide range of indignities but there are times when he is temporarily released from servitude to indulge in more regressive behaviour such as sliding down the banisters or practising his downhill mountain biking skills. There is even a trip to Paris where, on bended knee, he is solemnly invested with a frying pan sized medallion in recognition of his excellence in the art of cleaning and polishing. The frying pan is a constant, endlessly scrubbed and burnished to a dazzling lustre, even to the point where it can function as a mirror in which the children or the ladies of the house can admire their fairness of countenance. 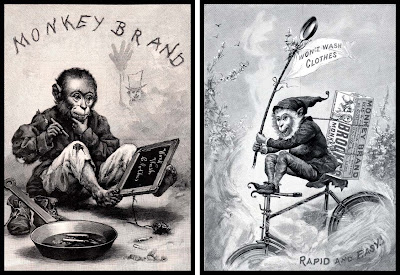 There’s an entire book to be written about these ads. The artwork is mostly unsigned; the initials G E R appear occasionally but the identity remains a mystery. What at first appear to be fine examples of eccentricity in advertising prove, on closer examination, to embody a wide range of unsettling Victorian values and social attitudes. Before you know it you can be knee deep in issues of creationism, gender, race, exploitation and colonialism and the apparent innocence of our bright eyed and not-so-bushy tailed simian friend will soon be a distant memory.