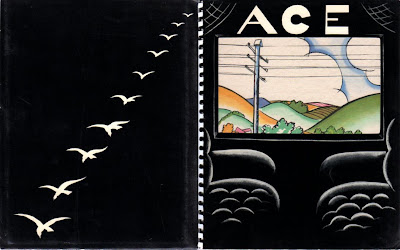 This book was published in 1937 and like yesterday’s subject was designed to serve as a guide to the route followed by a train, in this case, the Atlantic Coast Express. The cover is the best part with a sharp contemporary graphic quality that, sadly, is not maintained inside the book. The landscape outside the train is viewed through a slot cut into the cover. Inside, the linear illustrations are by Anna Zinkeisen and these examples give a flavour of their whimsical quality. The subject matter is conventionally romantic, smugglers, pirates and Spanish galleons at the seaside and churches, castles and packs of hounds in the country. The text is by the ever-dependable S P B Mais in a rich rhetorical style typical of the times. The Southern Railway had a much less co-ordinated approach to publicity by comparison with the LNER and it is common to see a wide variety of graphic styles, not all of which sit well together. There is an excellent selection of SR publicity to be seen by following this link. 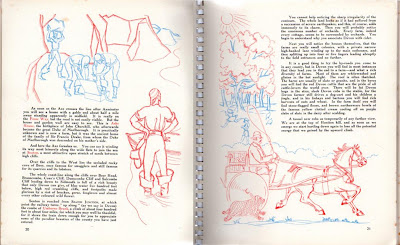 Every summer weekday morning between 10.00 and 11.00 am from 1926 until 1964 the Atlantic Coast Express would charge out of Waterloo Station with singular determination in the direction of Salisbury and Exeter. Even before reaching Exeter it would begin to fragment, dispatching portions to Sidmouth and Budleigh Salterton in East Devon and many hours later it could still be found, much reduced in length, meandering the rural byways of West Devon (for Ilfracombe and Bideford) and North Cornwall en route to its final destination overlooking the fishing harbour at Padstow. None of its multiple destinations are still served by railways but the track from Waterloo to Exeter survives to this day as a rather sorry affair operated by South West Trains with a tangible lack of enthusiasm. West of Salisbury it has been reduced to a single track with the occasional passing place with the result that the best frequency on offer is a train every 2 hours with a strong possibility that your train will be held up while it waits for an oncoming train to clear a section of single track before it can proceed. The stations have been stripped to their bare essentials and every inch of track or siding unable to justify its continuing financial viability has been ruthlessly eliminated. 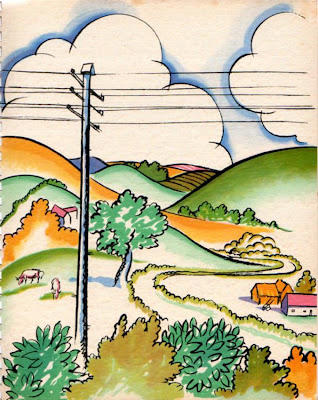