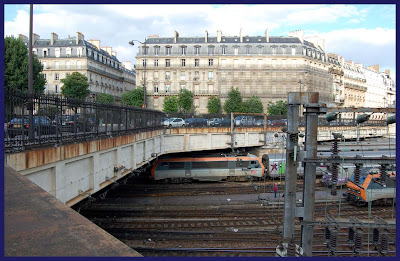 To the north of Gare St-Lazare and south of the boulevard des Batignolles in the 8th. is a radial network of streets and boulevards named after European cities and centred on the Place de l’Europe. The Place de l’Europe is actually a bridge over the rail tracks leading into Gare St-Lazare. Constructed in the 1860’s as a speculative venture the blocks of apartments give the area a very distinctive feel in which deep perspectives converge dramatically on broad intersections. Artists attracted to the idea of contemporary living began to occupy the spacious studio apartments. In July 1872 Manet moved into the area when he took a studio at 4 rue de Saint-Pétersbourg. The family home of Gustave Caillebotte was nearby on rue de Miromesnil. In a few years both Manet and Caillebotte were to find their subject matter on the streets where they were living and in 1877 Monet would carry out his concentrated pictorial exploration of the hinterland of Gare St-Lazare. Manet’s painting The Railway, based on the street outside his studio was exhibited at the Salon in 1874. Caillebotte exhibited his two masterpieces, Le Pont de l’Europe and Temps de Pluie, in 1877 so this particular year represents a high point in the artistic significance of the neighbourhood. 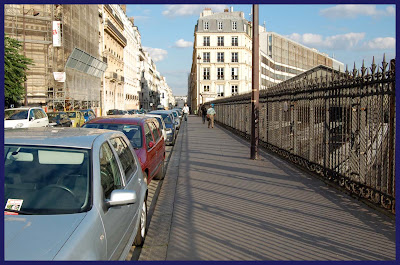 So, what remains? The air of modernity is long since departed but the fabric is remarkably well preserved. The distinctive lattice-work girders of the Place de l’Europe were replaced by railings in the 1930’s and the Goods Depot to the north east of the bridge has given way to a PTT sorting office with a brutalist concrete profile. There is a Métro entrance in the middle of rue de Madrid but otherwise much is as it was. Paris traffic races through the streets between monumental facades that are little changed from over 130 years ago. The plunging perspectives are the most tangible reminder that this territory was the arena for modernist painting’s very first encounters with an urban environment conditioned by speculative building on an industrial scale. The impersonality of city life, the weariness and boredom of routine and the impact of mass transit all came under the painter’s gaze. For Monet it was the sight of an urban reality transcended by smoke and steam, soot and sun that engaged his interest. Manet and Caillebotte shared a taste for penetrating the soul of the city by profound engagement with the ordinary and the unexceptional. The question is, do these streets still echo, however faintly to the footsteps of these long deceased investigators of urban alienation? Further consideration of this and other related matters will follow soon. 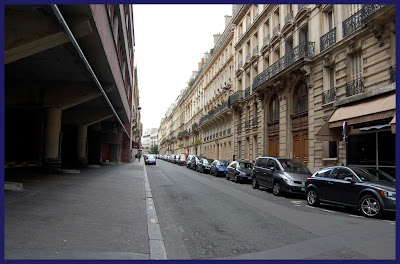