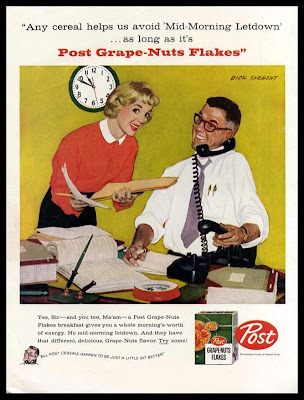 Dick Sargent (the only illustrator to have his name hi-jacked by a Hollywood star) was a master of the disturbingly euphoric expression. His other great skill was the dynamic gesture. No loafing around in the Sargent universe. This made him the perfect choice to dramatise a breakfast cereal that claimed to transfer quite alarming levels of energy to all who consumed it. Observe the ecstatic features of the mid-century executive as he juggles phone calls. Energy levels are clearly going stratospheric. Flat areas of colour surrounding the figure were another distinctive Sargent touch. It not only lifted his illustrations off the printed page, it saved time. While Dohanos, Crockwell or Falter were piling up the anecdotal detail, Sargent would always be several commissions ahead. 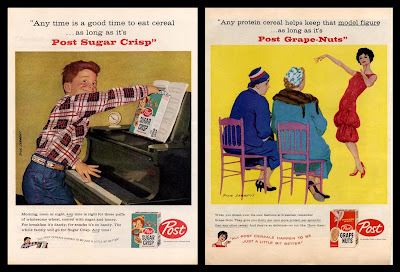 The bonus postcard shows an idealised representation of the great Postum Cereal Factory in Battle Creek. Nine towering chimneys pump smoke into the atmosphere, toy trains and trolley cars bustle in the foreground. In the background, a leafy enclave, a haven from which the captains of industry can observe the mighty engine of production they’ve set in motion. 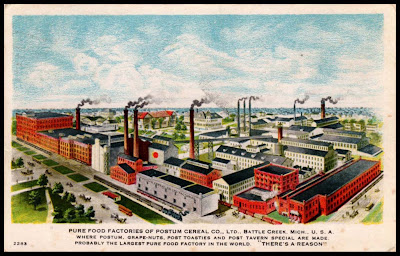