Postcard of the Day No. 27, Métro Bastille 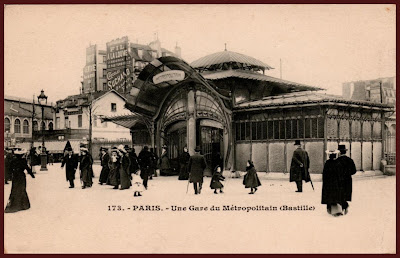 It is grimly reassuring to know that it’s not only in Britain that architectural gems are casually and needlessly destroyed. This creature of the bizarre architectural imagination of Hector Guimard was demolished in 1962. If it had clung to existence for another 5 years, it would certainly have survived and would by now be designated a national monument, as has the édicule at Porte Dauphine. This pavilion, constructed in 1899-1900, was one of only two such Métro entrances designed by Guimard and was a grievous loss to the Parisian streetscape. The rehabilitation of Art Nouveau arrived too late to save it from destruction and the botanically inspired iron-work was reduced to the condition of scrap metal. Guimard’s candélabre Métro entrances, known as Entourages, have fared better and at the last count some 154 were still in existence. The name candélabre derives from the elongated stem like forms that support twin red lamps that shed a baleful glow over the descending steps. The Entourage is greatly valued for the exotic flavour that it imparts to the street scene and the survivors are all lovingly maintained in good order. 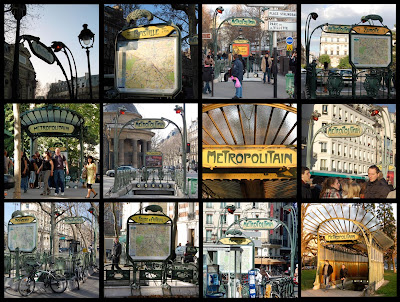