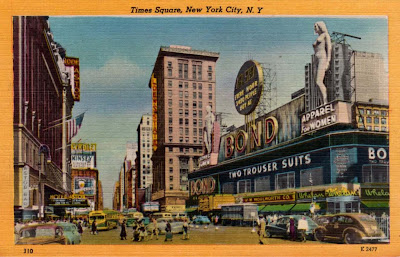 The Wrigley’s Gum neon sign at Times Square (see posting dated March 15th 2009) was a casualty of wartime economies and in peacetime its place was taken by this installation, promoting Bond clothes for men and apparel for women. The colourful flamboyance of the Wrigley sign gave way to a more austere assemblage in which the most original note was struck by the two seven-storey figures of a naked male and female. The large-scale nudity gave serious offence to the guardians of public decency and after complaints from guests at the Hotel Astor on the opposite side of Broadway, robes of neon gold were installed to protect their modesty. The figures were separated by a spectacular neon waterfall feature and an enormous digital clock that additionally recorded the number of customers patronising the Bond Cathedral of Clothing. It remained in place from 1948 to 1954.

There was a Budweiser sign in Times Square in the era of linen postcards that featured a neon representation of the Grand Canyon with a stainless steel streamliner passing in the foreground. The tagline was built on the hyperbolic premise that Budweiser was so sublime in every respect that words alone could never suffice to do justice to its wondrous attractions. That made it comparable with the natural wonder of the Grand Canyon, whose spirit no artist with pen or brush or camera has ever been able to capture. This card is an especially good example of the way in which linen postcards translate glossy finishes and the flash of reflected light into a rich and warm penumbral glow.

Finally, to see what goes on behind the signs, follow this link as a guest of the always dependable Visual Telling of Stories. 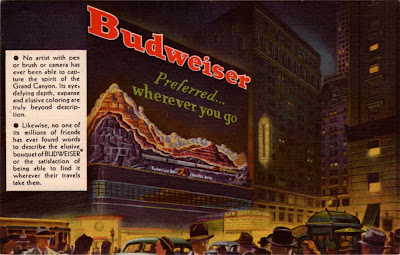