Medics on Parade – the Nicotine Infirmary 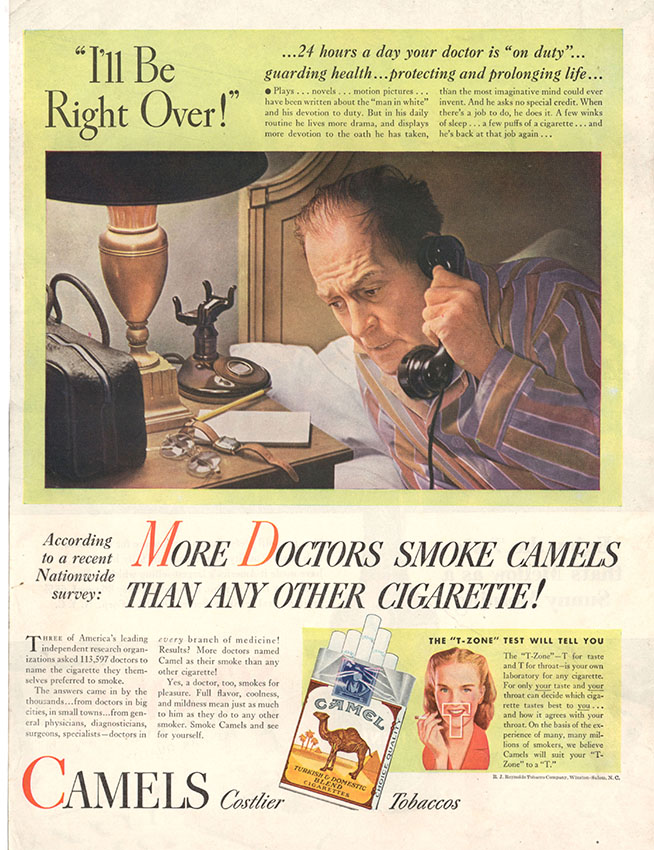 Possibly the most unscrupulous and irresponsible advertising campaign in the history of persuasion was when the American tobacco industry co-opted the image of the medical profession to proclaim the harmless nature of their product. On top of attempting to convince the public that there were no health risks in smoking they offered a counter-narrative in which smoking was actually beneficial to health. In the process they significantly damaged the reputation of American health professionals by implicating them in a concerted plot to undermine the growing body of evidence linking smoking with respiratory illness, lung cancer and heart disease. Before these concerns arose, it had been an easy life, supplying the public with a product to which, in their millions, they rapidly became physically addicted. All their corporate energy had gone into a vicious struggle for market share but this new threat could not be ignored and would consume vast sums of new advertising expenditure. 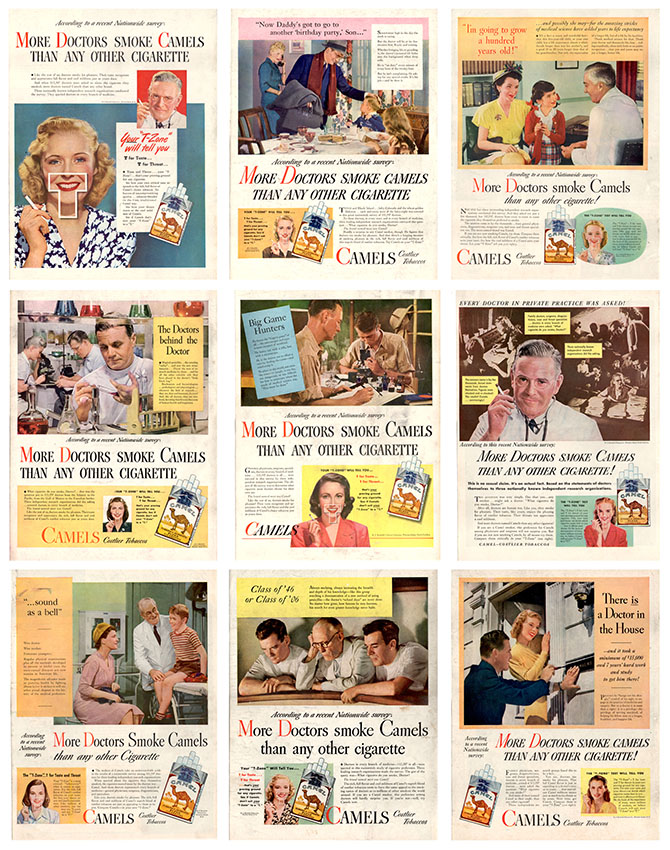 A significant element in this plot was a massive public relations campaign to promote scepticism and uncertainty about connections between smoking and health. A free periodical, Tobacco and Health was mailed to doctors and dentists. The pages were full of studies that questioned the validity of cancer researchers’ statistics, spreading doubt and confusion about their methodology, demanding unachievable standards of proof, alongside profiles of lifelong smokers in ripe and healthy old age. But the major element was the relentless barrage of advertising aimed at a bewildered public in which a procession of bogus doctors declaimed their equally bogus professional expertise that nothing could be less dangerous to health than smoking. 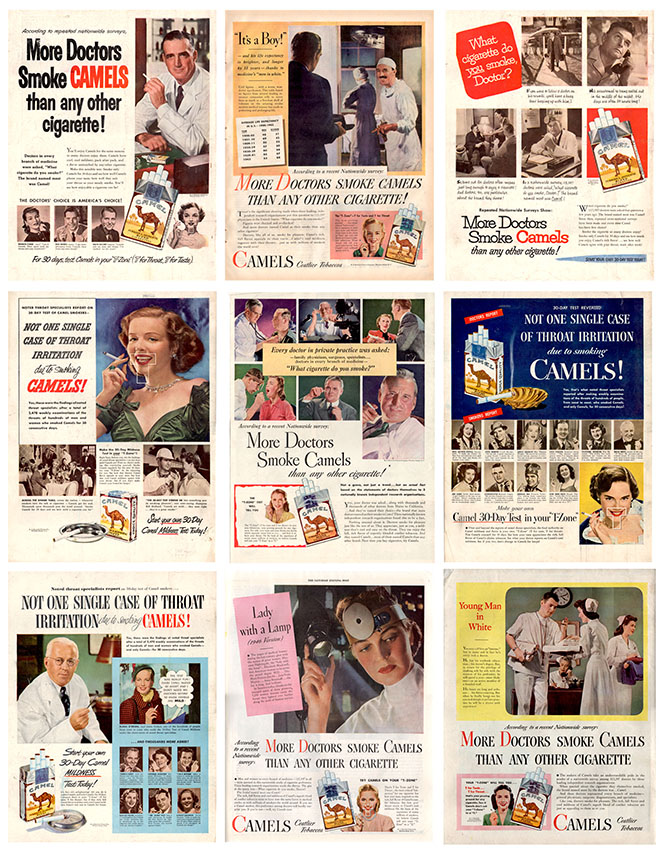 This battle climaxed in the 1950s but America’s physicians had already had their goodwill and public esteem exploited by the tobacco industry for more than two decades. It began with endorsing individual brands for “kindness to the throat” or for “less irritation”. From offering reassurance to smokers that chronic expectoration was nothing to be concerned about, it was a short step to advancing claims that smoking protected the user from the worst of coughs and colds with mysterious anti-septic properties. During the war the doctor virtually disappeared from tobacco advertising as the armed forces moved centre stage to remind the public just how much was owed to the tobacco companies for their part in allied military victories. When peace returned and medical researchers intensified their scrutiny of tobacco and public health, the image of the doctor was back on front-line duty with a vengeance. 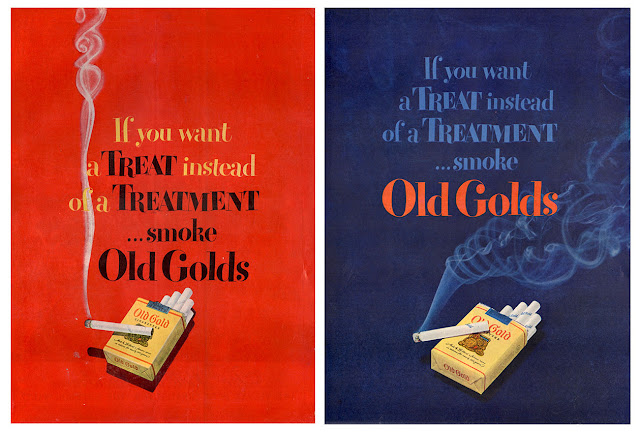 R J Reynolds led the post-war push-back against the emerging medical consensus with a long series of ads with the slogan, More Doctors Smoke Camel Than Any Other Cigarette, above which doctors were portrayed by suitably avuncular models from central casting, busily employed doing very good things – delivering babies, inventing new drugs, treating sick children and dashing off on midnight emergency calls. Reynolds backed up their claim by polling doctors at medical conventions about their favourite brand immediately after a generous distribution of complementary Camel cigarettes. As for the public – who could reject the considered opinions of these paragons of Hippocratic virtues? 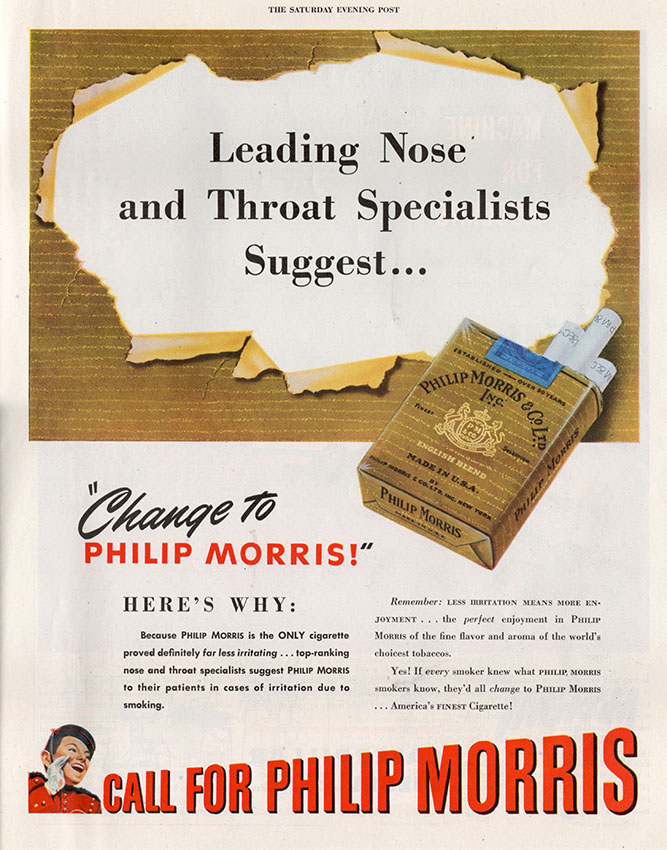 Unsupported claims were everywhere - Leading Nose and Throat Specialists Suggest ...... “Change to Philip Morris!” – the only cigarette proven to be less irritating, recommended by top-ranking specialists. Like Camel, Philip Morris (a late-comer to the market) had ambitions to position itself as the preferred brand for doctors, advertising extensively in medical journals and deluging physicians with free samples. Old Gold was another Depression-era brand that kicked its way into contention via uniquely aggressive promotion – in the 1950s Old Gold endlessly repeated a most curious message – If you want a TREAT instead of a TREATMENT ... smoke Old Golds. We’re tobacco men ... not medicine men – the public was reminded. This might have been the most subtle campaign of all, designed to deflect all the negative associations around smoking on to competing brands without making any dubious claims of their own. Lucky Strike followed a similar strategy with its Be Happy-Go Lucky! campaign that said to the public – stop depressing yourselves with all that gloomy medical stuff and have yourself some fun like all these deliriously cheery Lucky Strike smokers. Throughout this inglorious episode all the tobacco companies pursued similar tactics to defend their position but Camel deserves a special mention for mendacity on a grand scale in the service of peddling their lethal product and for their studied indifference to the life-chances of their loyal and addicted customers. 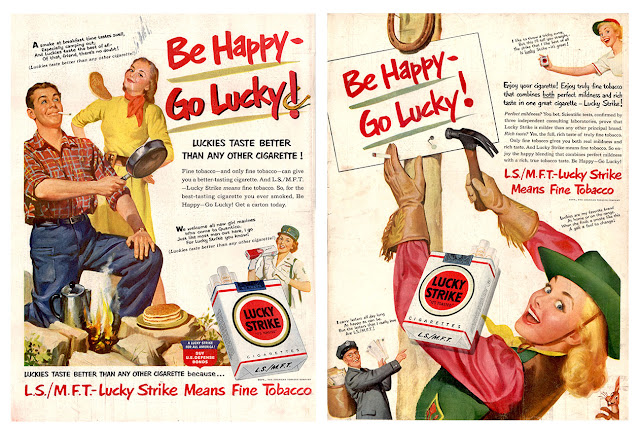