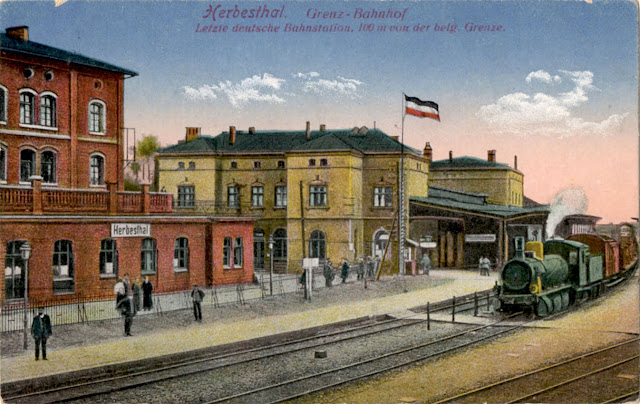 There was a time when border disputes were a frequent trigger for international conflict. But things move on and we now live in a time where borderline enforcement is the highest priority. To mark the new era of immigration control and wall-building we present a series of vintage postcard views of frontiers beginning with the highly contested border between Belgium and Germany. In 1843 Herbesthal, then in Prussia, became the world’s first international border crossing station when the railway connecting Aachen and Liège opened to traffic. Queen Victoria and Prince Albert passed through in 1845 on a visit to their relatives. For over a century the business of examining documentation, collecting customs duties, changing locomotives and crews kept the station active and local people in employment. Station facilities expanded rapidly to cope with the growth of passenger and freight traffic and in 1890 one of Europe’s major mail sorting centres was opened in a new 5 storey building alongside the station. Herbesthal had become what we now call a communication hub.

On the eve of the First World War, Stefan Zweig was travelling from Oostende, after one of his many holidays there, on the last train from Belgium to Germany. It was standing room only and German officials came on board at Verviers, the last Belgian station. The next station would be Herbesthal but Zweig’s train was held up while an almost continuous wave of freight trains passed in the opposite direction. Even in the darkness it was easy to see beneath the tarpaulins, the sinister forms of artillery and military vehicles. On arrival at Herbesthal, Zweig wandered the platform in search of news and discovered it to be completely occupied by German troops. By this time he was in no doubt that he was an eye-witness to a German invasion of Belgium “in defiance of the statutes of international law.” On his return to Vienna, Zweig succumbed to a brief efflorescence of pan-Germanic patriotism, attempting to enlist without success and writing in praise of the Belgian invasion he had observed for himself. By 1917 he was in temporary exile in Zurich, energetically campaigning for the pacifist road to peace. 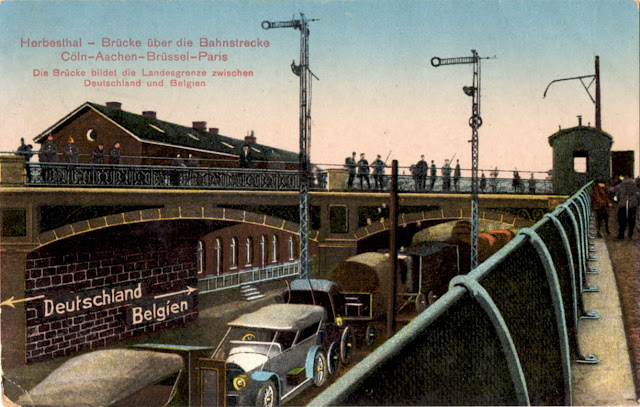 In the post-war settlement in 1920, Herbesthal became a Belgian town until it was forcibly reabsorbed into the Reich in 1939. In 1945 it reverted to Belgium where its former importance as a border crossing was soon to disappear with the railway being re-routed some 200m. south via Welkenraedt when the line was electrified in 1966. Despite their proximity, Welkenraedt is a Francophone town while Herbesthal remains a German speaking community. This is a link to an image of all that remains of the station at Herbesthal. Previous posts on this subject can be seen by following this link.
Posted by Phil Beard at Wednesday, March 01, 2017