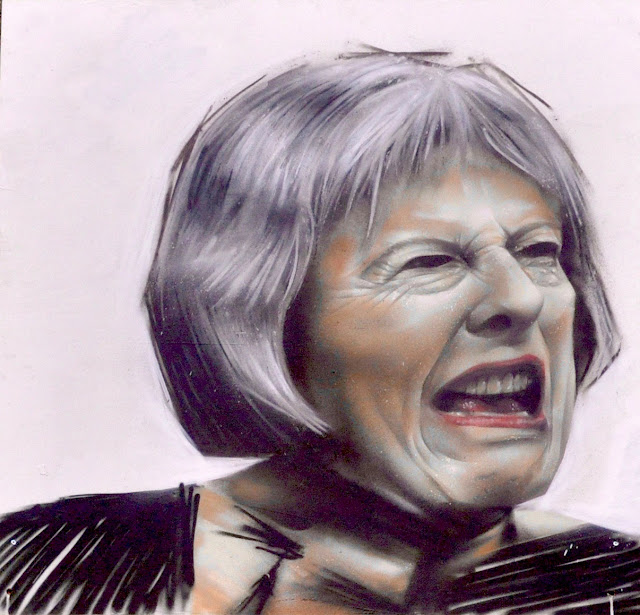 It’s my view that the private lives of politicians should be respected as such. But when they choose to disclose details of their private lives we have the right to pay close attention. Almost 9 months have passed since my last comments on the world of current affairs in which time we’ve been introduced to Remoaners, Enemies of the People, Snowflakes, the new Party of Working People, Fake-news, Fake-Potus and Flotus, even Fake-lies, all of which I’ve let pass without comment, having nothing really to add to what has been much better expressed elsewhere. But yesterday’s news that the Prime Minister is abstaining from the consumption of crisps for the period of Lent has roused me from my torpor.

There are many levels on which this is disturbing. Beginning with the scale of Mrs. May’s act of self-denial – we are told she is especially fond of salt and vinegar flavour so the inference is that this is a heroic sacrifice on her part. Withdrawal symptoms cannot be ruled out. If she plans to donate the money saved to charity it would over a period of 40 days be unlikely to exceed £10 unless she is given to uncontrollable bingeing (not a pleasant image). I would have been no less impressed if she had given up beetroot or chewing-gum or avocado or nail varnish. No less effective in drawing oneself closer to God. Who would dare to describe this behaviour as virtue-signalling?

We might ask whether Mrs. May’s choice was designed to make a good impression on all those former Labour voters she is keen to embrace. Perhaps there’s a picture in her mind of the typical Labour voting family gathered in front of the TV on a saggy sofa, sustaining themselves exclusively on a diet of potato snack products. We must accept that between the fashion shoots for Vogue and the turkey-shoots with the Leader of the Opposition, there’s not much time for keeping in touch with ordinary people. So hats off to the May family for all the Happy Meals, Quiz Nights at the local, trips to the Tanning Salon and Car Boot sales where they keep the faith with their social inferiors.

As the daughter of an Anglican clergyman Mrs. May stands firm in her Christian faith even if it takes a form not universally recognisable as such. She will insist on taking positions on refugees and immigration that fly in the face of the Church’s teaching on the value of charitable impulses and the relief of distress. And though the rich man may yet struggle to enter the kingdom of heaven, he can rest assured that Mrs. May’s first duty as Prime Minister is to defend his prosperity on earth.

Politicians are notorious for evading responsibility for their actions by defining the terms of debate in the most restrictive and legalistic form. So if we should discover Mrs. May in the act of scoffing a tube of Pringles or cheerfully chomping her way through a jumbo-size bag of Doritos with a clear conscience, she would be ready with a reply. These products clearly do not meet any plausible definition of ‘crisps’, being triangular or parabolic aggregations of corn-starch. Mrs. May will take no lectures from those who would force the public to eat nothing but crisps for Lent. Still less from those who never eat crisps.

The portrait was photographed on a building in Whitecross Street, Finsbury last September.
Posted by Phil Beard at Thursday, March 02, 2017