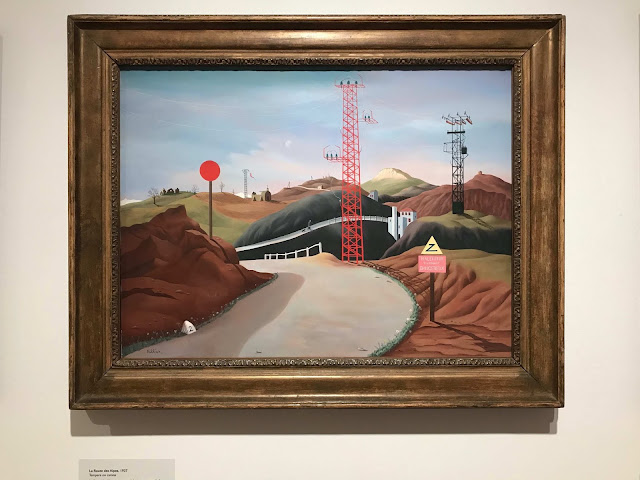 On my first ever visit to the Tate (aged 14 and a juvenile admirer of Dali and Magritte) my uneducated eye was drawn to a Tristram Hillier landscape, La Route des Alpes (1937) where a proliferation of pylons, transmitters and roadside signage with distant ruins seemed to resemble exactly what I would like to be painting myself. Only the addition of a train on a viaduct could improve it. Last week I saw the painting again in Taunton in the exhibition Landscapes of the Mind - The Art of Tristram Hillier and its grip on the imagination was as strong as ever. It’s a painting that doesn’t immediately disclose much about its meaning and there’s no great message to transmit. This curious assemblage must be accepted on its own terms as an unsettling mystery that doesn’t demand to be decoded. In Hillier’s paintings there’s a sense of detachment enhanced by the meticulously finished surface values, beneath which we sense the work of a complex and often troubled individual. 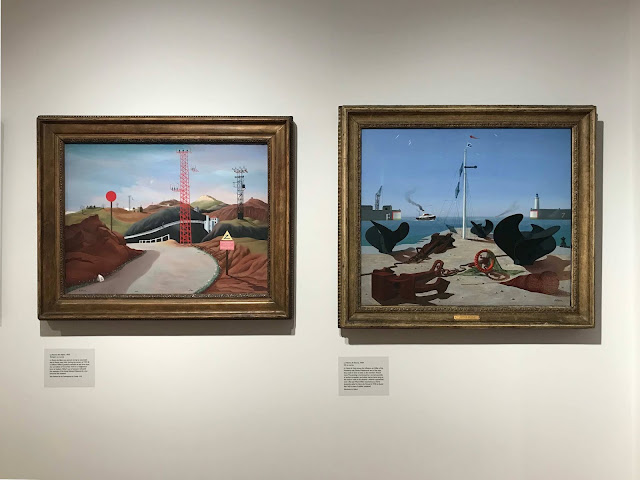 Hillier was a rootless English colonial, born in Beijing in 1905 where his father was manager of the Hong Kong & Shanghai Bank, he was 9 years old before he saw England. Family relationships were cool and distant and much of his childhood was outsourced to a Catholic public school. The decision that he should study Economics at Cambridge was dictated by his father. After his father’s death, he was able to find his way to the Slade where he fell foul of the doctrinaire inflexibility of Henry Tonks and later to Paris to study painting in the studio of André Lhôte. As an artist, Lhôte had been quick to spot the decorative potential of Cubism which he presented in a rich and vibrant colour palette and this formed the basis of his teaching and attracted a large number of students. For a few years, Hillier experimented with Cubism, Fauvism and a polite form of Surrealism and on a brief return to London in 1933-34, he participated in the Unit One movement, one of the few concerted efforts to inject some avant-garde vigour into the torpid English art world. Hillier lived well and painted in Europe from 1935 to the early days of the war, mostly in France and Spain. Back in England he did 3 years of war service in the RNVR before settling in Somerset in 1943 where he remained for 40 years until his death in 1983. The wandering days were not entirely over as he made regular painting trips to Spain and Portugal, almost every year.

The Paris years (1927-30) were the most formative influence on Hillier’s identity as an artist. By his own account, he shifted from one direction to another as he was exposed to the full range of competing ideologies but it was the contacts he made with the Surrealists that made the most lasting impression. Max Ernst rented him a studio and he painted alongside André Masson on a Spanish journey. Roland Penrose became a friend and he made the acquaintance of Picasso and André Breton. Echoes of de Chirico can be seen in his preference for minimally inhabited spaces, albeit described with a meticulous realism that de Chirico never aspired to. Coherent themes emerged in the 1930s - first among them being a fascination for coastal harbour scenes and maritime detritus. Like his friend Edward Wadsworth, he was well aware of the power of oversized items of marine engineering to disconcert the viewer with their formal incongruities. Lighthouses, breakwaters, jetties, flagpoles and cranes formed the compositional elements of his most intriguing paintings. Landscape reframed as still-life. 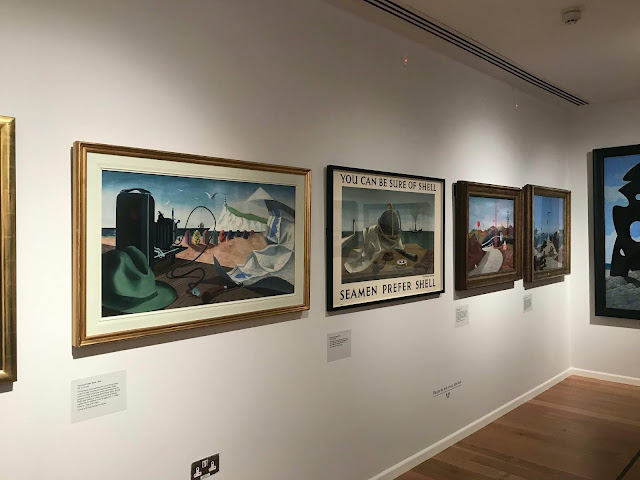 When Hillier published his autobiography, Leda and the Goose in 1954, he was well established in his Somerset home with almost 30 years of painting ahead of him. He is sparing on the subject of his artistic career and there’s even less about his ideas and motivation, being most comfortable describing his hectic social life, his travels and passion for sailing. The backward glance seems to confirm the increasingly conservative drift of his values and opinions even though he was not yet 50. His former allegiance to the Roman Catholic faith had been renewed and the art of the still-life was claiming much of his attention. There’s a passage in the book where he acknowledges the unique genius of Picasso but he is at pains to add that it is “an evil genius as I have come to know”. 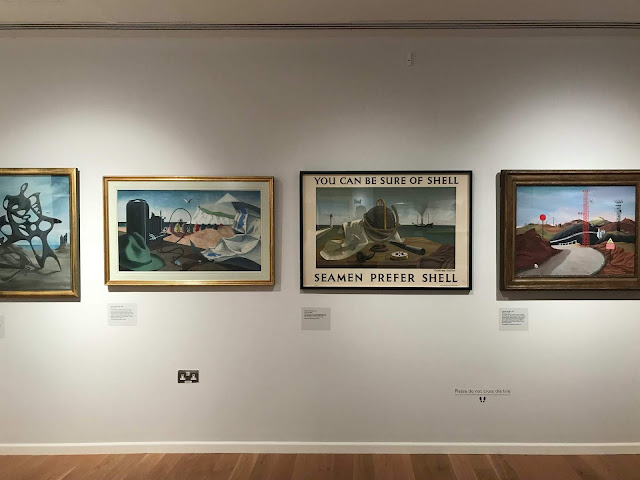 The retreat into deepest Somerset was not a retreat into the comforts of the English Pastoral. It’s striking the extent to which Hillier repudiated the bucolic vision of the green and pleasant land. The stark outlines of winter trees and the harsh geometry of agricultural buildings surrounded by broken, unrepaired fences and collapsing drystone walls populate the rural scenes. Everywhere dead and dying trees, anguished in form and devoid of foliage offer reminders of decay and dissolution. Where figures appear, their relationship lacks warmth and sometimes suggests hostility - all of which hints at the darker side of country life. The winter months of incessant rains and days of gloom were not to Hillier’s liking and his journeys south to Portugal and Spain brought essential relief. Here, vernacular architecture and townscapes marked by the dazzling contrast of sunlight and shadow vied for his attention with the lure of the coast, the boat builder’s yard and the ensembles of fishing boats drawn up on the beach. Human forms were banished and the resulting paintings often deeply unsettling in their sense of desertion. In the most subtle way possible, it all suggests a life of undemonstrative discontent and low level depression. Achievements seemed outnumbered by disappointments and the glamorous days of dizzy socialising at endless parties and the Mediterranean sailing expeditions were impossibly distant. More than enough to turn a conservative disposition toward the consolations of alcohol, tobacco and the endless fury of the opinion pages of The Daily Telegraph. 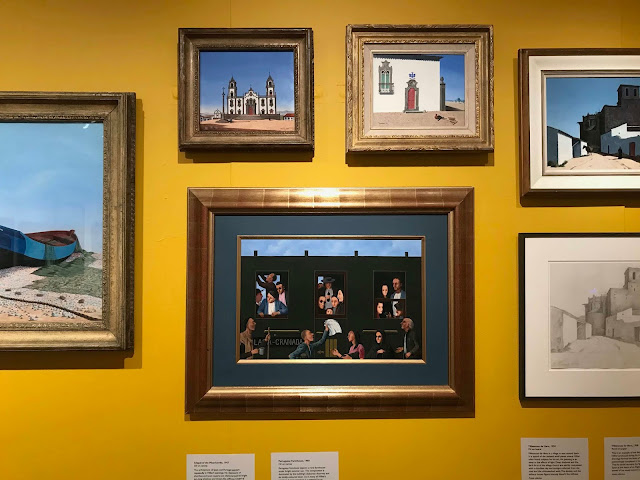 The Taunton exhibition is exemplary in its choice of work and its presentation. A compact and intense exhibition can be more rewarding than a sprawling survey and this is perfect in both size and scope. As a long term admirer I needed no convincing of the quality of Hillier’s work but there’s every chance that this show may persuade those new to his work that Tristram Hillier was an artist of consequence who, at his best can stand alongside many of his contemporaries who enjoy more substantial reputations. 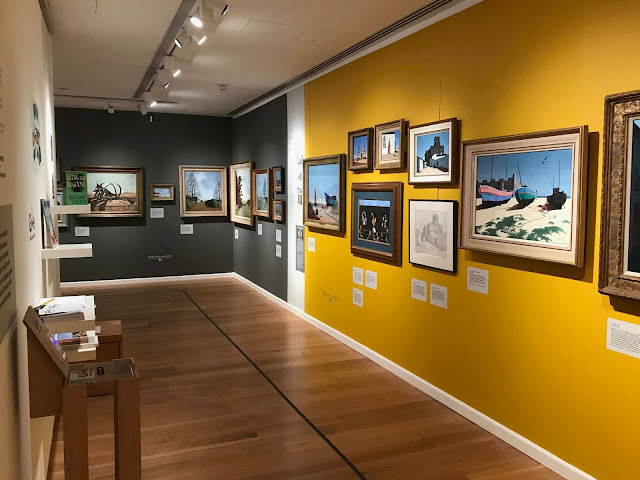 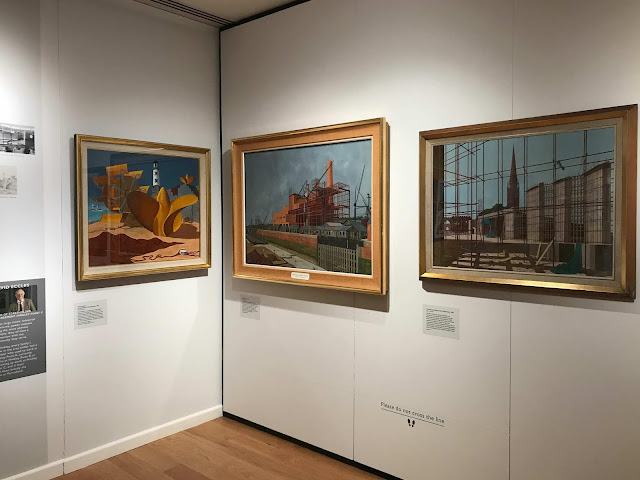 dinhdiepphuongtrinh said...
This comment has been removed by a blog administrator.
31 December 2019 at 06:51