Postcard of the Day No. 98 - Officer Down 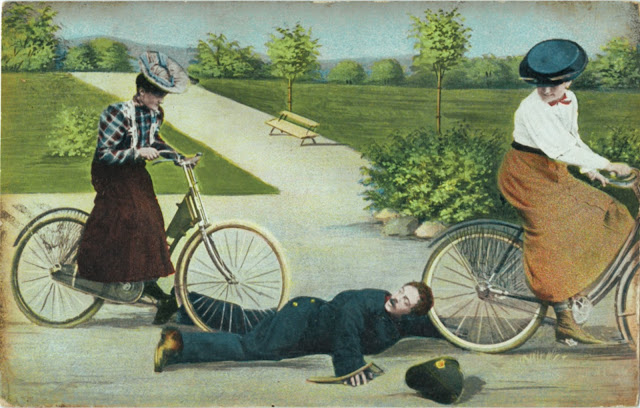 One of the few points of amusement in the present crisis has been to observe the behaviour of our police forces as they explore their newly enhanced powers to intrude into the lives of members of the public. The opportunity to interrogate any random passer-by has been too good to miss. The streets and parks have become the property of the police - anyone using them must justify their presence to the satisfaction of the guardians of the peace. Many of us have a relatively mild authoritarian tendency but those in whom this tendency is most extreme gravitate towards the military or law enforcement. Much effort is made to convince the public that these impulses are under control and the police only exist to deliver safe and neighbourly communities. All now squandered by Chief Constables instructing officers to search the nation’s shopping trolleys for non-essential purchases. Anyway, the officer on this postcard has seriously compromised the dignity of his profession and allowed himself to be taken advantage of by a duo of female cyclists who have manoeuvred him into a perilous situation. I’m not an admirer of comic postcards but I make an exception for this because it so neatly subverts the stereotypes of the genre where women are routinely subjected to all manner of indignities while men act out their God-given role as masters of inane banter.
Posted by Phil Beard at Monday, April 20, 2020