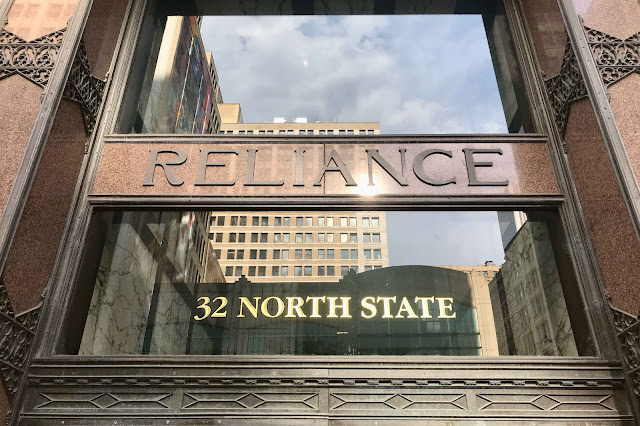 The Reliance Building in the Chicago Loop was constructed between 1891 and 1895 on the site of an existing five storey bank building at the intersection of State and Washington. It was a laborious process that involved demolition of the ground floor which had been acquired with vacant possession while retaining the upper floors until the leases expired.  Supporting the upper section required extensive jack-screwing while a link with the street level had to be maintained for access. The new building would rise to its full fifteen storeys as the upper floors were vacated and demolished. 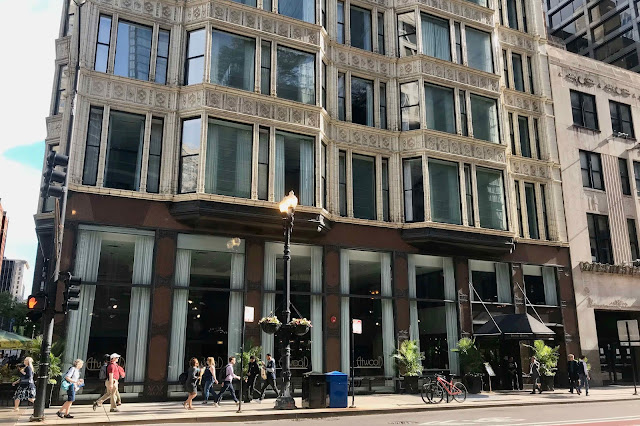 Allocating credit for the innovative design features of the Reliance is problematic.  Chicago firm of Burnham and Root was the lead architect but a key role in terms of engineering was taken by the developer, William Hale, who under another hat was the founder of the Hale Elevator Company; his fortune grew with the height of the buildings.  Hale took charge of the technical challenges of demolition and rebuilding the lower floors while securing the upper floors. John Root died in 1891 during the first phase of construction and is generally credited with designing the innovative steel frame plus the ground floor but it was his replacement, Charles Atwood who took charge of the design and construction of the upper floors including the glazed white terra-cotta cladding. Atwood also takes the credit for the huge bay windows that comprised a pair of fixed windows flanked by opening sashes to either side for ventilation. Burnham raised the finance, marketed the building to tenants and was the public face of the project. 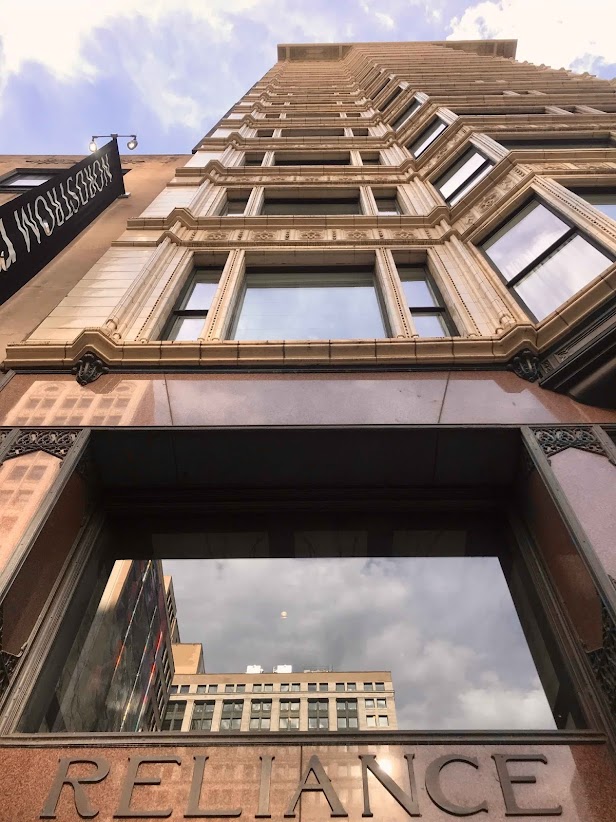 When the Reliance opened in 1895 the first tenant was the Carson Pirie Scott & Co. department store - they occupied the first two floors while the upper floors were subdivided and let as office space, consulting rooms and dental surgeries.  Critics and commentators hailed it as a landmark in the evolution of the Chicago Style but it’s reputation was rapidly overshadowed by the next generation of much larger and taller buildings. By the end of World War 2 its fortunes were in steep decline - professionals moved out, a mix of wholesalers, light industry, and a menswear store moved in.  By 1980 most of the later tenants were moving out without being replaced and the fabric of the building was decaying at speed - the terra-cotta façade was discoloured and cracked and the cornice had to be removed to protect the public from falling masonry.  By this time its importance was forgotten by all but the most dedicated enthusiasts for Chicago architecture. A campaign was launched to rescue the building from neglect and with growing public support and funding a detailed restoration began.  This would conclude in 1999 when the building reopened as an hotel (The Burnham) with its dazzling terra-cotta brought back to life.  Staircases, elevators and circulation areas were returned to original condition so far as regulations permitted.  In recent years the hotel changed hands and the new owners rebranded it in line with others in the chain which is how it came to be landed with the fatuous name of Staypineapple - a moniker that seems like an insult to the dignity and reputation of the building.  The rationale for this decision can be read here.  Warning, contains language that some might find offensive. 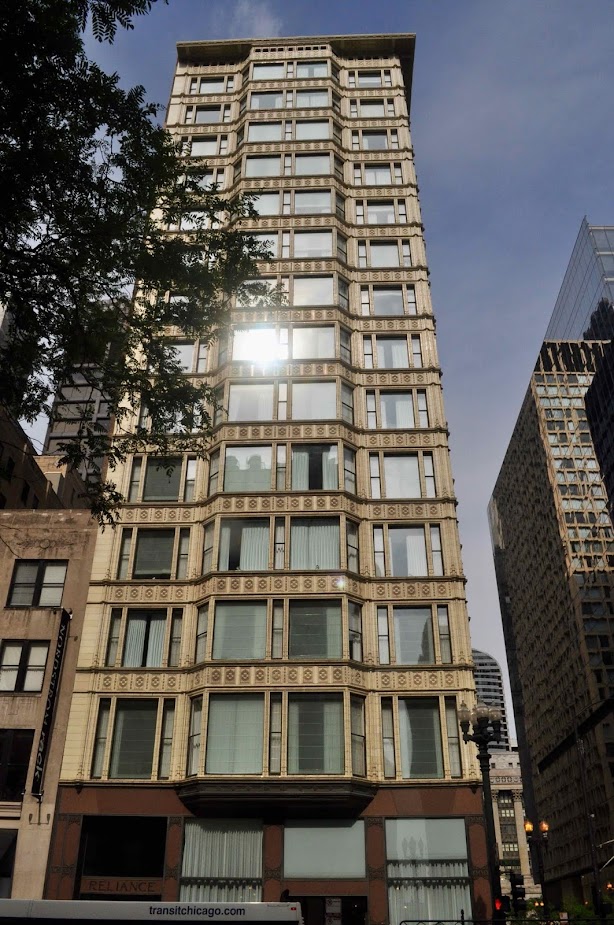 Enhanced views from inside the Reliance offer the same sense of optical plunge that Boccioni recorded in The Street Enters the House (1912) - an expanse of glazing that invites an onrush of visual information at an intimidating velocity.  More practically, the occupants enjoyed the optimum quantity of natural light in all weathers.  Books consulted are 1)  Jay Pridmore,  The Reliance Building (2003) and 2)  Dan Cruickshank,  Skyscraper (2018).  Cruickshank’s exhaustive and immensely rewarding account of the Reliance is at the absolute centre of his history of the evolution of the skyscraper - highly recommended. 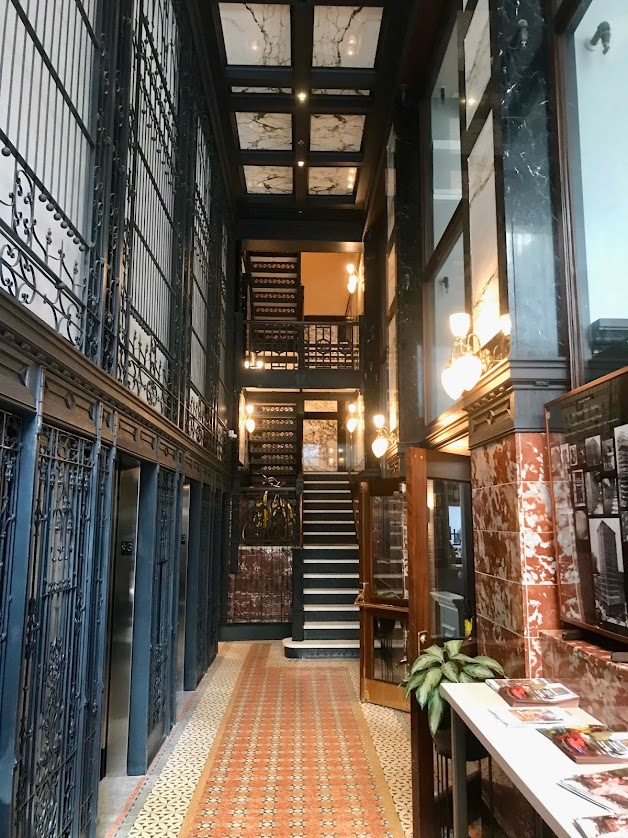 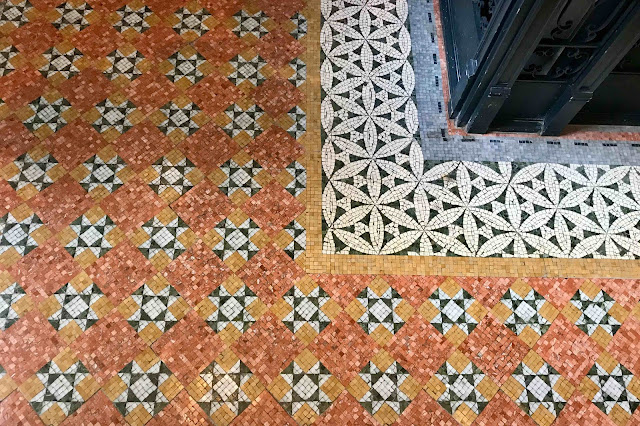 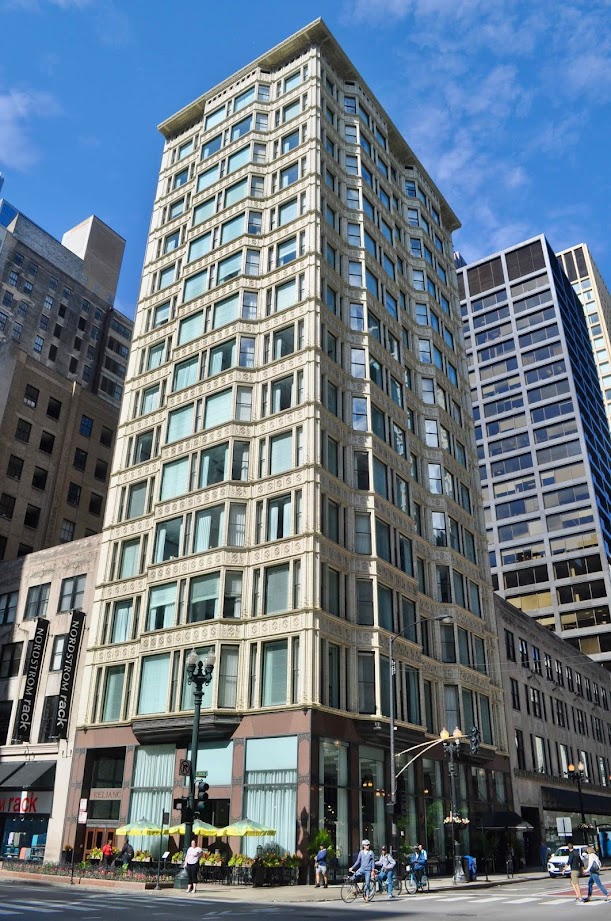 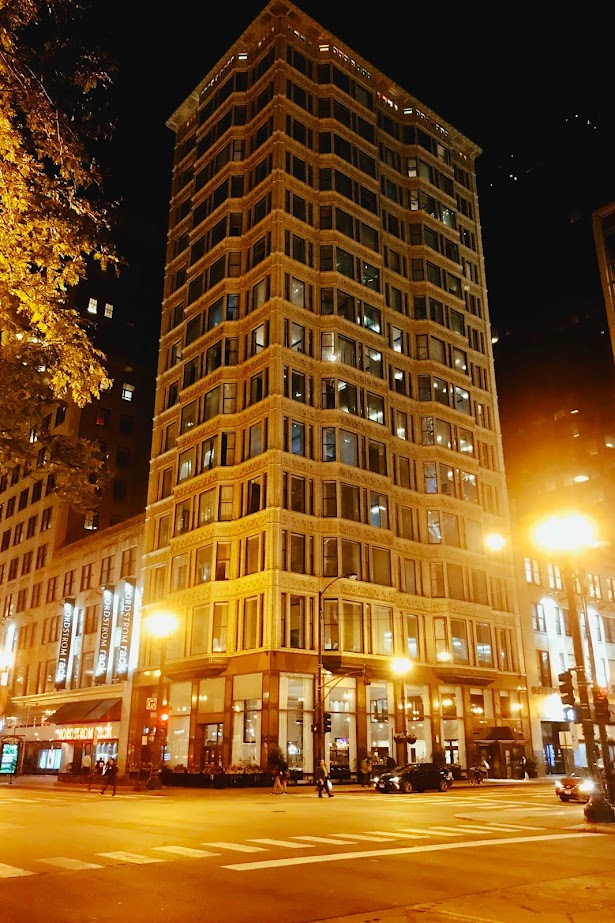 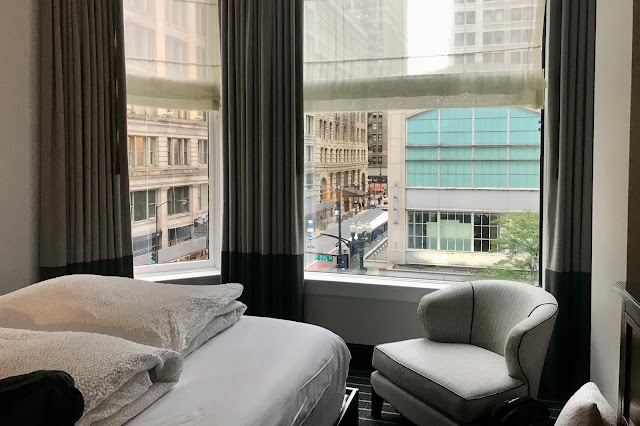 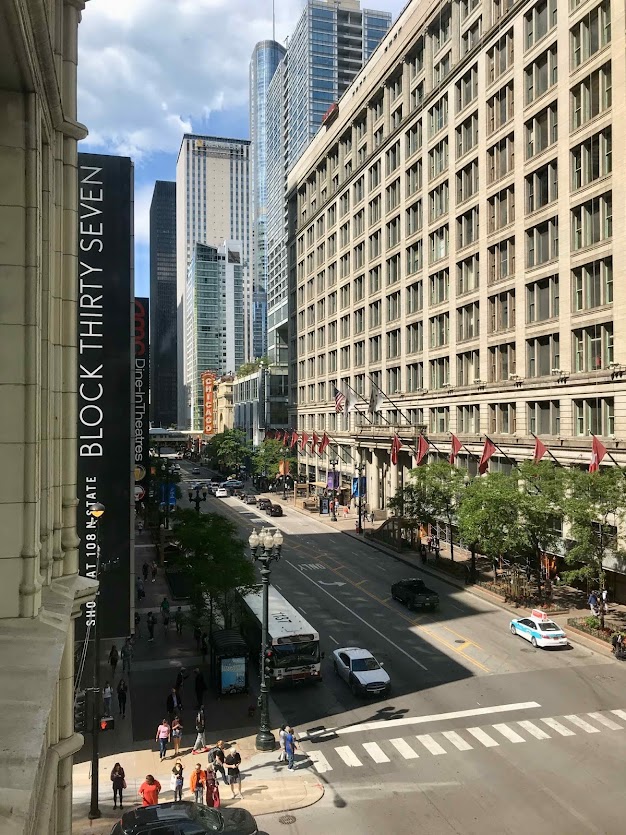 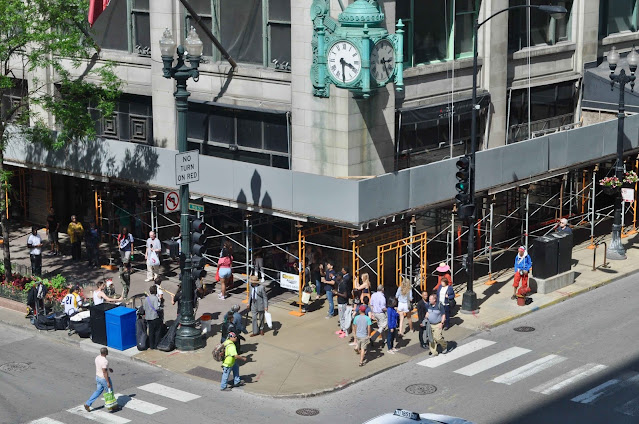 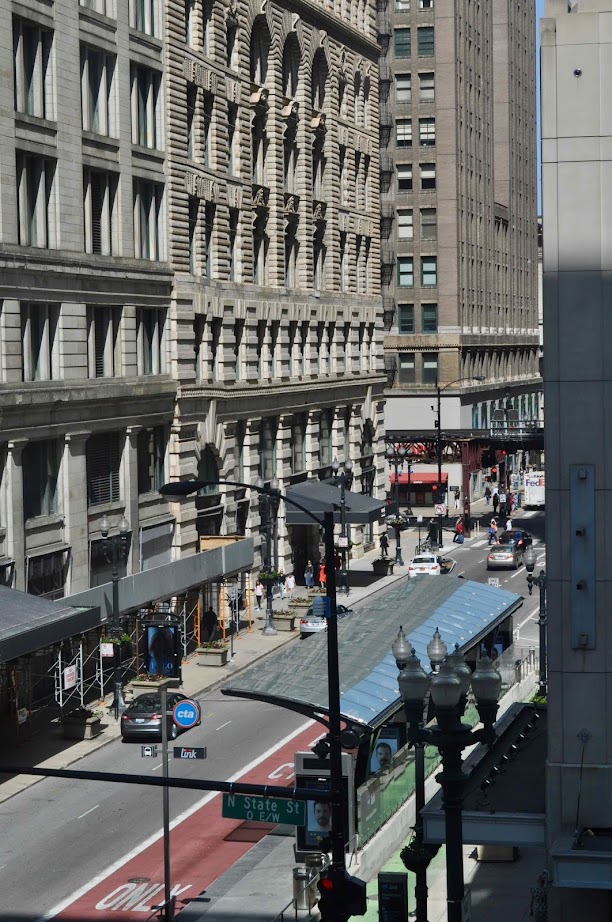 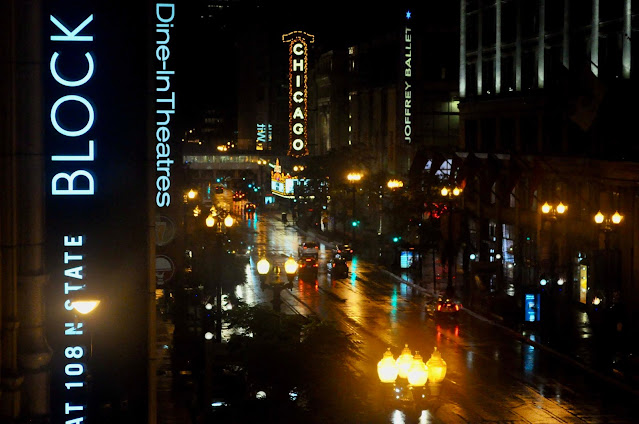