Postcard of the Day No. 106, Larkin Factories, Buffalo 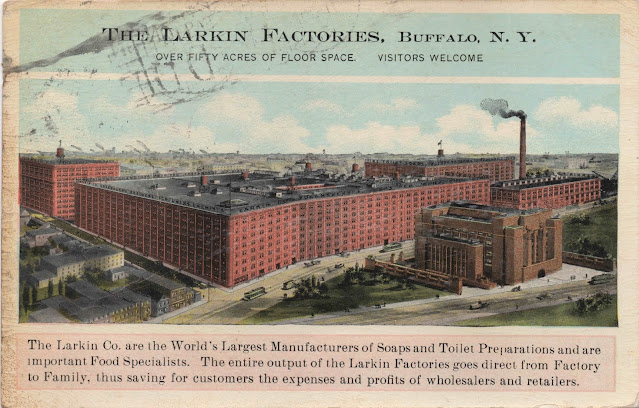 This is a conventional promotional postcard - an invitation to admire the inordinate scale of the Larkin Factories activity and the vast extent of its premises in a hand drawn aerial perspective view. The Larkin business was in mail order supplies. As the American settler population infiltrated the most remote regions of the territory in search of unclaimed land, more and more consumers came to depend on the US Mail to keep their rural homesteads supplied with goods. Companies like Montgomery Ward and Sears Roebuck in Chicago expanded phenomenally by catering to this market and mailed compendious catalogues from shore to shining shore.  Within a decade of its foundation as a manufacturer of soap in 1875, the Larkin Company had expanded its product range and sales volume and relaunched as a mail order operation selling direct to the public.  Savings made by dispensing with a sales force enabled them to offer discounts and undercut conventional retailers. 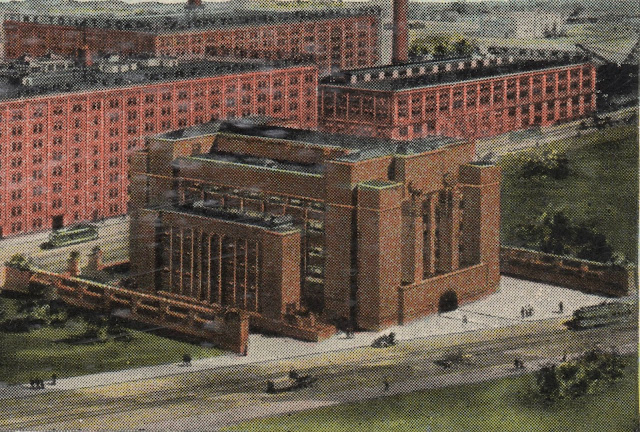 By 1903 the company offices were dispersed across a sprawling industrial complex and John D Larkin commissioned Frank Lloyd Wright to design an Administration Building to consolidate all office functions under a single roof. A grainy image of Wright’s building, completed in 1906, occupies the lower right portion of the postcard and it’s immediately apparent it looks unlike every other building on the site. At first glance its slab sided form has the air of an industrial building - a turbine factory or a power station.  Harsh rectilinear elevations and cliff faces of unbroken masonry are a product of Wright’s fascination with the manipulation of cuboid volumes and convey a sense of permanence, ironically considering the building’s ultimate fate.  The severity of the building’s profile is offset by decorative subtleties designed by Wright’s Oak Park collaborator, Richard Bock and the sensation of upward momentum implied by the strong vertical forms*.
Wright’s vision was responsive to practicalities such as the provision of air conditioning, a glazed roof that illuminated a deep light court or atrium enclosed by balconies, specially designed office furniture (where comfort was sacrificed for appearance), and universal fire-proofing.  When complete, Wright’s radical reinvention of the modern office block drew criticism for its lack of surface differentiation and an absence of colour and decorative moulding. It was left to European Modernists, ever an object of suspicion to Wright, to find positive things to say, notably Erich Mendelsohn who visited in 1924 and wrote effusively about what he saw and Mies van der Rohe who openly recognised its pioneering qualities.  Wright himself would translate much of the basic geometry of the Larkin project to the design of his next building, Unity Temple in Oak Park, where his vocabulary of horizontal and vertical forms would be infused with colour in the service of the spiritual qualities that were always closer to his heart.

The family run Larkin Company was not especially nimble in its response to changes in the market and was in serious decline by 1939 when bankruptcy was narrowly avoided.  At the same time Wright’s building was subjected to a series of unsympathetic alterations including the installation of new windows that destroyed the unity of the architect’s vision. After fruitlessly throwing money at a variety of diversification projects, the business finally closed in 1942.  Wright’s building was sold to a developer whose plans came to naught - when demolition took place in 1950 the vacant site became a car park.  Wright was unexpectedly sanguine - perhaps he lost interest as the Larkin family repeatedly compromised the integrity of his building.  It all makes for a fascinating saga and the undisputed authority on the subject is Jack Quinan, whose book, Frank Lloyd Wright’s Larkin Building, Myth and Fact (MIT Press, 1987) is indispensable.

*  Quinan drew attention to the extraordinary ensemble of grain elevators to be seen in Buffalo and reminds us that Wright would have seen them every time his train to or from Chicago passed by them.  Wright expressed his admiration for their functionality and uncompromising dominance in the landscape. Quinan speculates that something of their presence might have filtered into the formal geometry of the Larkin building - we can’t know for certain but it’s not wildly implausible.