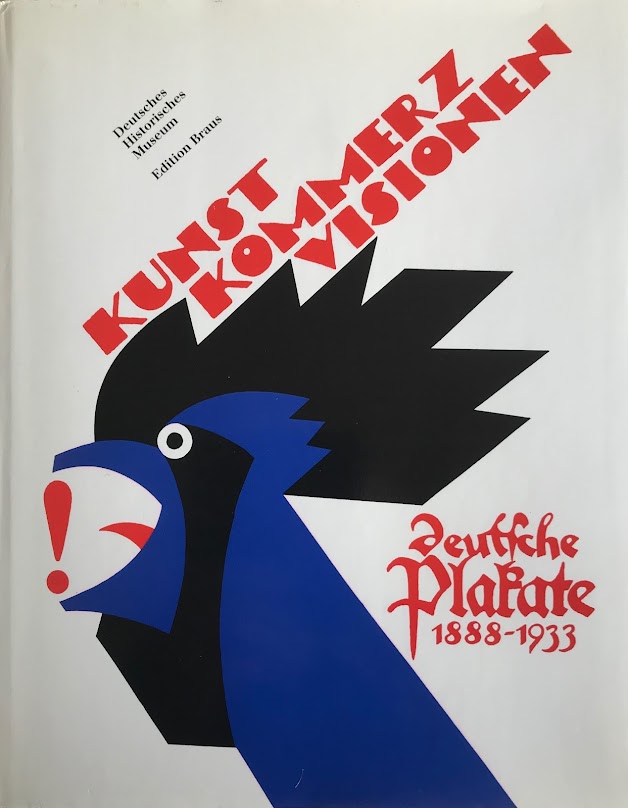 The sheer strength and visual power of German graphics always command attention and admiration.  Their confidence in asserting their message with clarity and simplicity is exemplary. Nothing quite equals the forceful expression of the Sachplakat style - image, text, colour, impact - that was pioneered by Lucian Bernhard in or around 1910.  It was a technique that broke through the visually seductive, decorative and ultimately over-elaborated language of Art Nouveau/Jugendstil that had dominated the previous decade or more. Suddenly all the panels of attenuated floral forms were rendered stale and formulaic.  Distorted and distended letter forms that privileged decoration over legibility gave way to the unadorned brevity of Bernhard’s simple but muscular fonts.  Sachplakat images required no more than a glance from a moving train or vehicle to deliver their content - the accelerating pace of urban life left little time for a leisurely contemplation of the visual complexities of a Jugendstil-inspired poster on a Morris advertising column.  The strong colours and bold imagery of Sachplakat posters were designed to punch through all the visual noise of the urban environment and catch the eye of the consumer in an instant in which the brand name could drill into the unconscious mind. 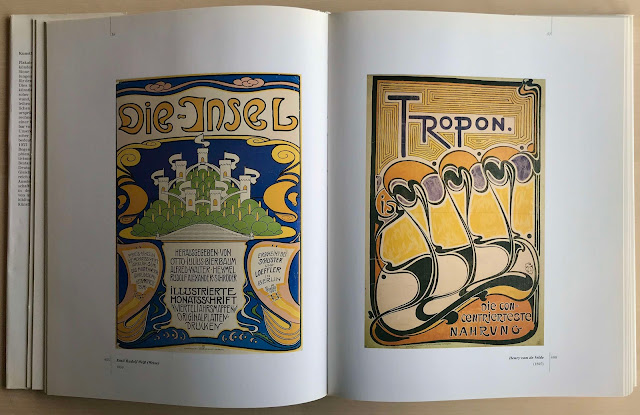 Based on a Berlin exhibition in 1992, this book (Kunst, Kommerz, Visionen, 292 pages, ISBN 3894660384) is one of the best available surveys of German commercial graphics and many of the illustrated examples have rarely, if ever been seen in other surveys.  The review period is 1888 to 1933 and guides the reader through the early years in which the prime influences were Jugendstil and La Revue Blanche to the Sachplakat era and beyond as the austere Bauhaus geometry became progressively more embedded in the visual culture of Weimar Germany.  What also changed in this period was that advertisers extended their psychological reach into the minds of consumers. It was no longer enough to communicate product information.  Consumers needed to be convinced about the merits of the product in the clearest possible visual language which left no space for gentle persuasion.  Brand names - Persil, Osram, Bosch, Opel, Manoli - needed to be fixed in public consciousness for which Sachplakat was the perfect vehicle, these being the only words you would see on a typical example. The image would be stripped to essentials and expressed via simplified forms and clearly defined areas of flattened colour. Sachplakat was an innovation that prepared the ground in which the Bauhaus philosophy of design could take root and endure. 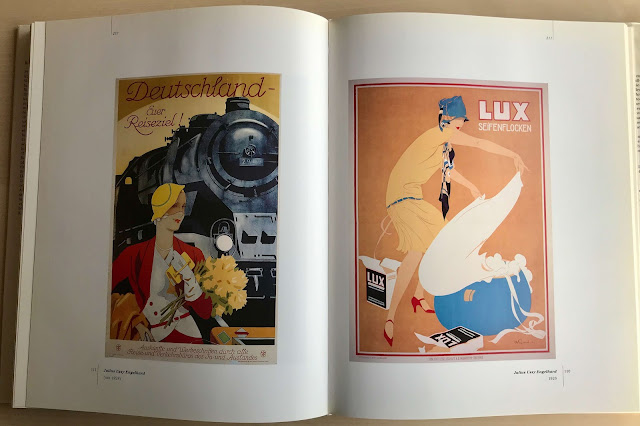 These page-spreads give a flavour of the book although I have chosen to omit examples from the section that deals with the influence of Expressionism.  This is nothing less than personal prejudice - I have limited appetite for the savagely brushed letterforms and the direct and intentionally crude drawing styles found in the work of Kokoschka, Corinth, Otto Dix and Max Pechstein.  Though I must concede this genre offers a convincing reflection of the ideological conflict and political violence that overshadowed the Weimar era and Otto Dix, in particular, was an enormously impressive painter. I suppose it strikes a discordant note where the main focus is on consumer culture - propaganda versus persuasion. And that might be the point of its inclusion. I have to admit there is value in seeing these distinct genres side by side. Just not here. 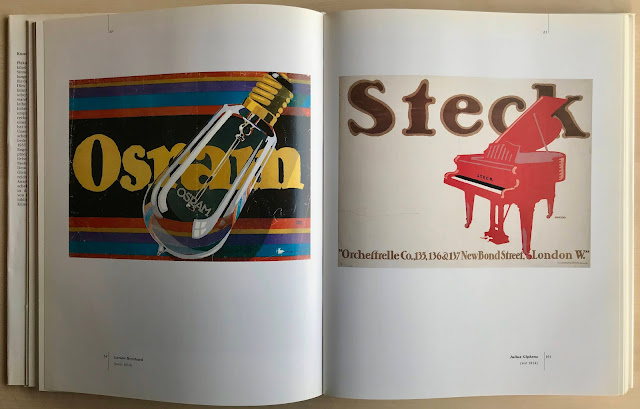 Other than to note that the British approach to advertising art was formed in a much more timid, conservative visual culture where innovation was a rich source of ridicule, it seems unfair to make a detailed comparison, given that German designers were able to draw on a much deeper artistic tradition where risk-taking and challenging boundaries was not so unwelcome. There were British designers who were aware of what could be learned from Germany - among them was the figure of Ashley Havinden about whom we posted last year.  In 1926 Havinden and his boss W S Crawford (ad agency founder) visited Berlin on a scouting expedition and met with Bernhard and other designers whose work they were familiar with from the pages of Gebrauchsgraphik then travelling to Munich where they met Ludwig Hohlwein. Following this Crawford established a Berlin office from which to service the Europe-wide Chrysler account which Havinden managed from 1927-28. One of Crawford’s Berlin designers was Terence Prentis (1904-46), whose Chrysler poster is shown below - his work was featured in Gebrauchsgraphik in September 1929. On his return to London Prentis was a co-founder of Colman, Prentis and Varley advertising agency in 1934, a major agency that remained in business until 1974. 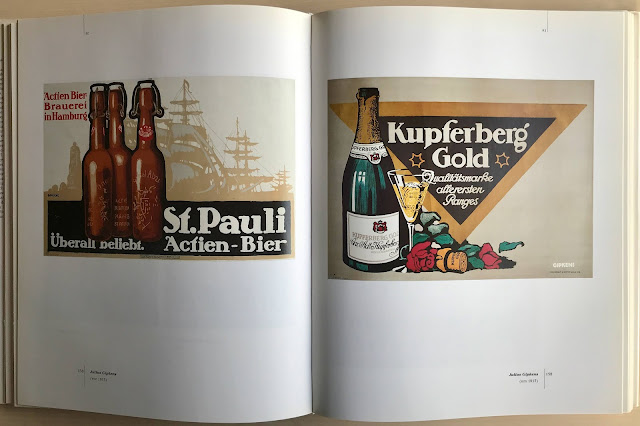 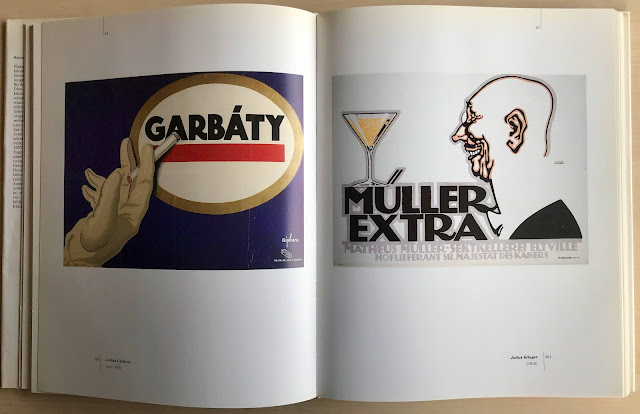 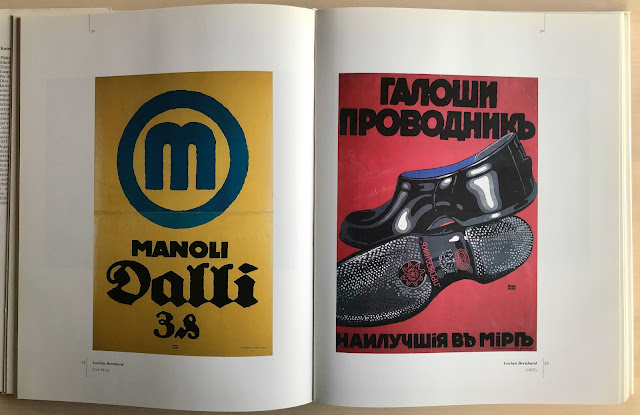 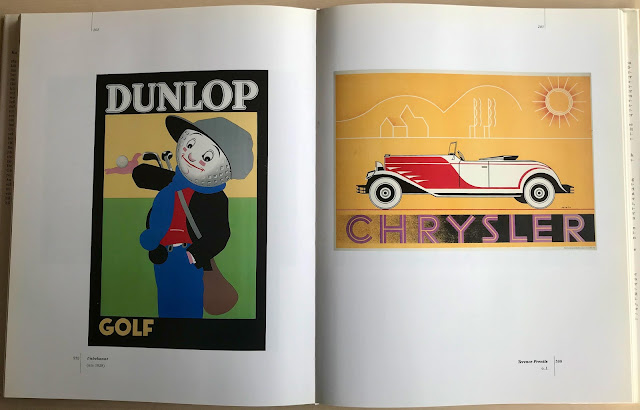 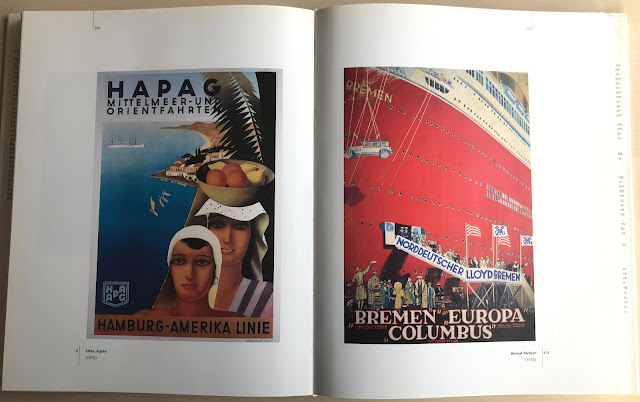 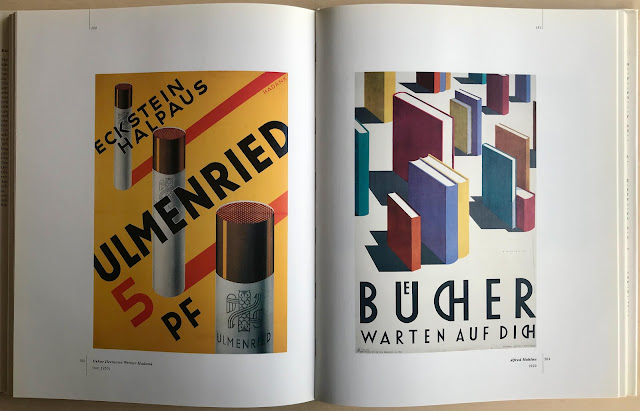