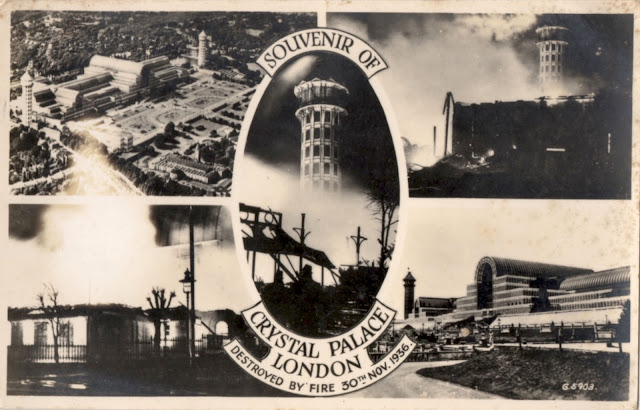 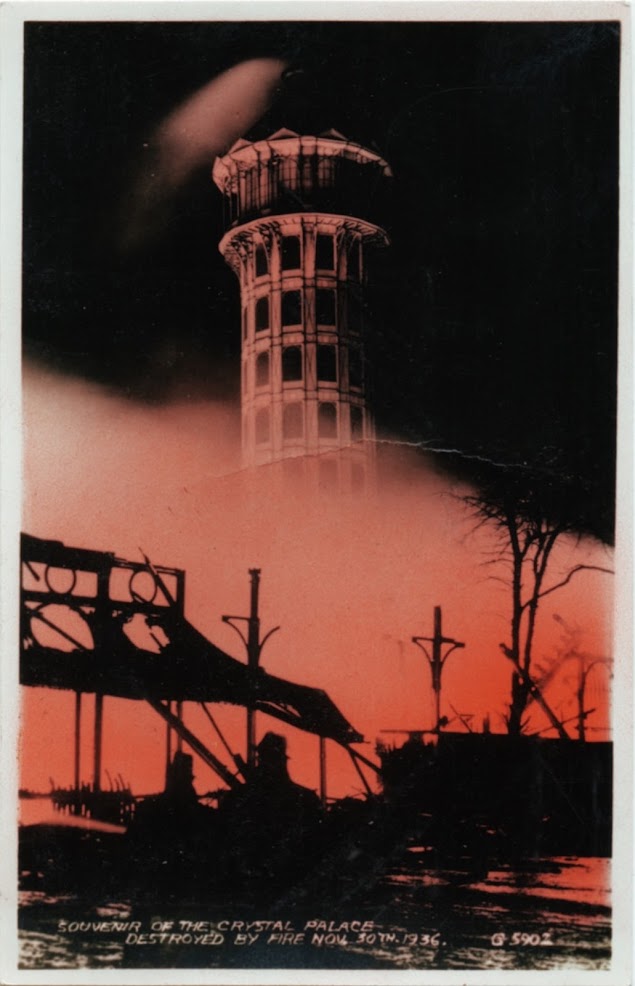 It’s hard to imagine William Morris as a teenage malcontent but at the age of 17 on a family visit to the Great Exhibition he refused to enter the Crystal Palace preferring to remain outside and fume against this gargantuan celebration of an age of industry.  We can assume that Morris objected to the replacement of the human hand by the machine, evidence of which was widely on display. Morris was not the only opponent of the exhibition.  Charles Sibthorp, MP for Lincoln, had made a name for himself as an implacable opponent of railways, Catholicism, free trade, public libraries and foreigners of every description. (His inheritors walk among us to this day.)  The thought of hordes of overseas visitors and the impact of their seductive skills and libidinous instincts on the flower of English womanhood was more than he could stand. A massive wave of crime and disorder was the least we could expect from an influx of foreigners entirely lacking the freeborn Englishman’s intuitive respect for private property. Noble English elms could not be sacrificed to make space for this monstrosity - an argument that lost all force when it was pointed out that the elm trees would survive intact inside the building.  Even The Times lent its support, reporting that foreigners were buying up homes in the vicinity of Hyde Park and converting them to brothels for the duration of the exhibition. 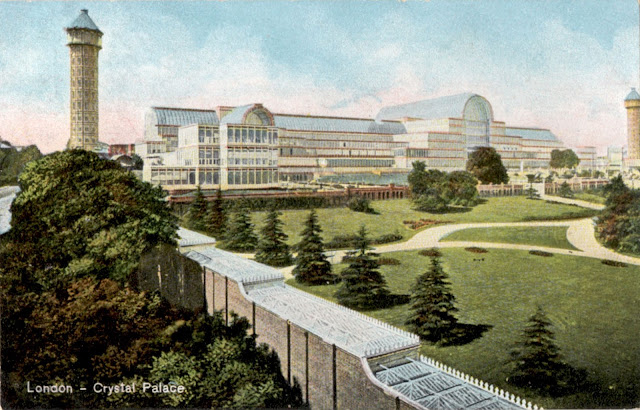 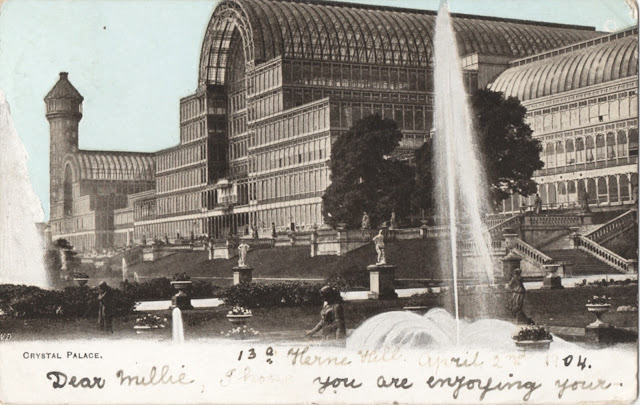 When the Great Exhibition of 1851 opened in Hyde Park, Joseph Paxton’s vast glass and iron pavilion was hailed by press and public as a technological wonder of the age.  Constructed from prefabricated elements in just 9 short months, its cavernous spaces displayed row upon row of the most innovative steam powered engineering products heralding a future of unlimited industrial mechanisation.  It was a national triumph and fed the swelling sense of English exceptionalism that would endure right up to the outbreak of war in 1914.  By way of contrast, another great English passion - the process of turning back the clock to a more congenial period in historic time to purge the nation of all the corrupt indecencies of contemporary society could be seen in Augustus Welby Pugin’s Medieval Court.  Pugin detested the Crystal Palace as an overbearing, spiritually empty demonstration of engineering ingenuity but could not resist the invitation to exhibit his own design work.  Inside the Medieval Court drapes concealed the offending iron and glass and the modern world that gave birth to it, allowing visitors to pay undivided attention to the exquisitely ornamented cabinets, candelabra, chalices and jardinières of Pugin’s design. Most admired of all was the truly massive Germanic stove, clad in brilliantly coloured Minton tiling that towered over all the other exhibits in the medieval refuge.  Behind the ostentation lay Pugin’s passionate advocacy for Catholicism - a difficult position to take at a time when Parliament was busy debating further legal restrictions on the Catholic faith. All of which perfectly illustrates a great contradiction at the heart of English cultural life - the division between the outward looking innovators and those for whom culture is the ritualised performative re-presentation of past achievements sanctified by posterity. 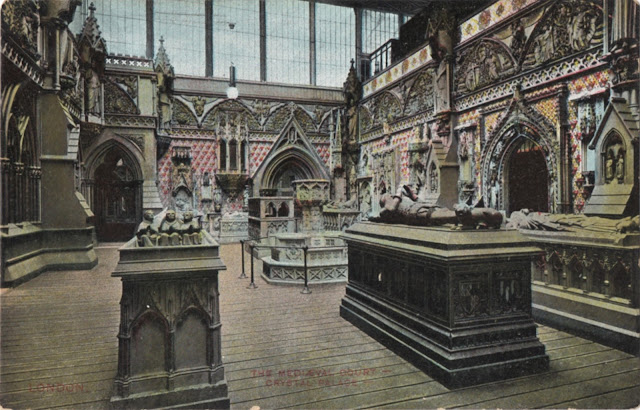 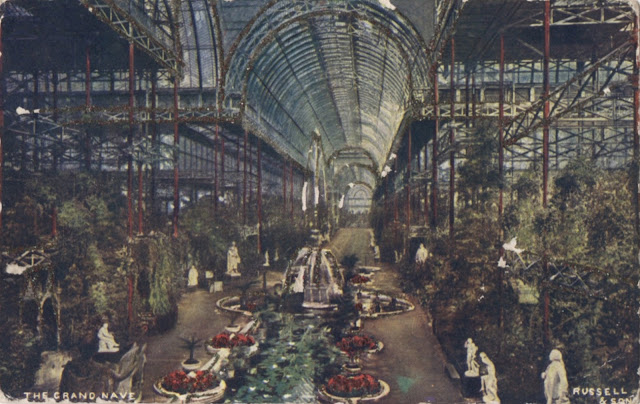 Londoners in 1851 were already in the grip of a hunger for spectacle - the mania for Panoramas was at its height. Like the visitors from around the globe, they were astounded by the scale of the exhibits and the visionary building that housed them. Highlights from the engineering section included a hydraulic press, steam-hammers, boilers, adding machines, printing presses and the latest steam locomotives. The exhibition theme of international peace wasn’t universally observed. A Birmingham iron foundry exhibited a sinister range of chains, shackles, manacles and fetters for export to slave-owning states while Krupp of Essen showed off its most lethal new weaponry.  Art lovers could contemplate the erotic charms of a wide range of unclothed female statuary offering a variety of crowd-pleasing poses from genteel restraint of falling robes to complete surrender to swooning abandonment.  Full size replicas of cultural landmarks from previous civilisations included the Karnak Temple, the Parthenon Marbles and the Alhambra - a transparent effort to position Victorian Britain at the apex of human development. 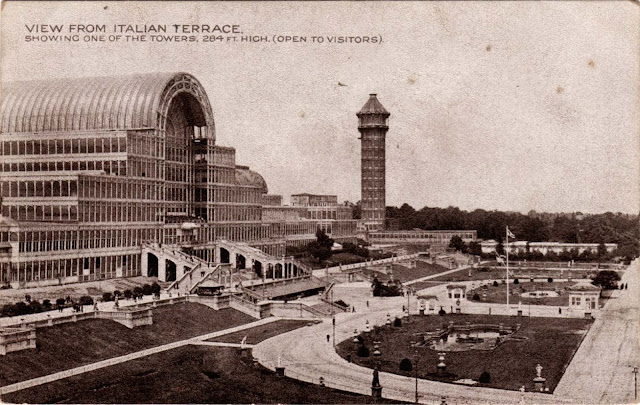 By the time the last paying customer left the building in mid October 1851, just over 6 million visitors had passed through the doors in 5½ months, generating a surplus of £18.4 million. By law the building had to be removed after 6 months and a business consortium (associated with the London,Brighton and South Coast Railway) having already acquire a large slice of what had been Penge Common, successfully offered their site for relocation.  What eventually arrived in South London after 2 years of construction was significantly larger than the original and its commanding position on the heights of Sydenham Hill made it visible for miles around. Most of the major high-minded replicas of cultural classics were transferred along with Pugin’s Medieval Court with the rest of the site set out for performances, concerts, festivals and exhibitions. The identity of the actual place in which it landed gave rise to much debate - many authorities settled for Sydenham but the strongest claim rests with Penge, given the fact that the Palace and surrounding parkland lay entirely within its boundaries. 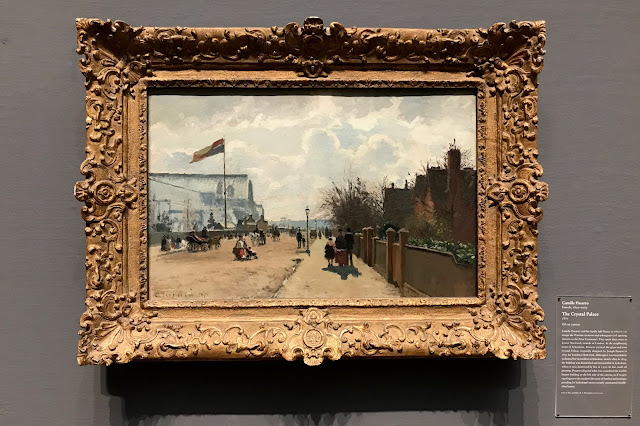 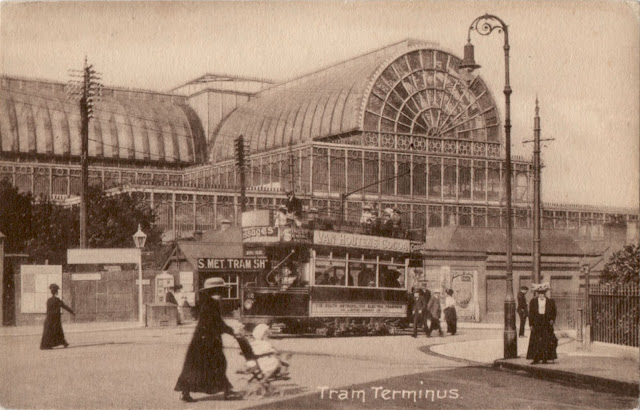 Its new incarnation, beginning in 1854 was not without its troubles. Although it became a much loved landmark and location for special exhibitions, it struggled to raise enough revenue to pay the astronomical costs of moving it from Hyde Park.  Excellent rail access was developed via the High and Low Level stations but visitor numbers weren’t helped by Sunday closing thanks to the Lord’s Day Observance Society - Sunday being the only day of leisure for the vast majority of working Londoners. By 1860, Sunday opening and a programme of cycle races, concerts, circuses, pet shows, firework displays and other attractions were well received by the public but a fire in 1866 destroyed most of the art and cultural exhibits in the North Transept.  In 1871 Camille Pissarro painted this view, seen above in the Art Institute of Chicago, and relegated the status of the Palace to just another element of the urban scene. By 1911 falling income and a backlog of essential maintenance plunged the business into insolvency. A programme of restoration and a change of ownership brought some improvement but the post-war years brought another period of general decline.  By 1936 the Palace was controlled by a trust and improvements were taking place.  Part of the building was in use as a laboratory for the development of the new technology when the building was burned to the ground in a massive fire on the evening of November 30th. The postcard publishers who had sold countless cards of the Crystal Palace in its prime for more than three decades bowed out with a series of cards recording its destruction.  If John Ruskin had been alive to see it, it might have brought some much delayed satisfaction. Ruskin detested the urbanisation of South London and the loss of his beloved Great North Woods and once described the Crystal Palace on its arrival in Penge as “a cucumber frame between two chimneys”.  Various schemes involving whole or partial reconstruction have been proposed including one that gained the support of our present Prime Minister when he was London’s elected mayor - just another of the legion of lost causes with which he’s associated. 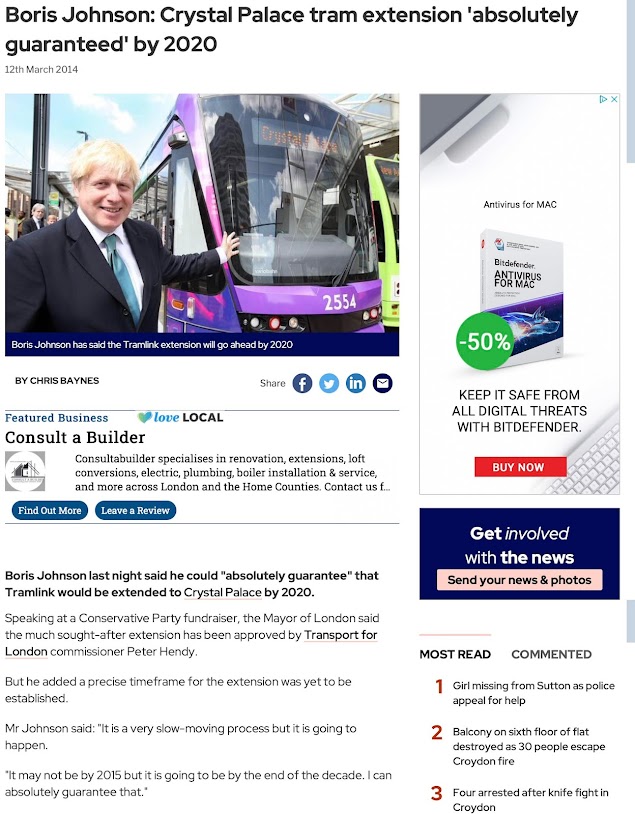 In a few years it will be the centenary of the fire and the last eye-witnesses must be in their nineties, yet the Palace continues to exercise a grip on the local collective imagination.  The Crystal Palace Foundation holds local authorities and other bodies to account in terms of conservation issues and helps to keep the memory alive with a programme of events and publications.  As an officially designated place, Crystal Palace has no legal existence but it’s widely accepted as a local identity and to some extent has overshadowed places of much longer standing such as Anerley, Sydenham, Upper Norwood and Penge. An elevated situation enhanced its visibility and Brunel’s water towers had a way of unexpectedly intruding into the view as seen at Westow Hill. The name has been attached to the local train station, a long list of businesses, services, retail and hospitality as well as a transport hub for London’s trams, buses and trolleybuses on which many routes converged from all parts of Greater London for decades. (See below for a detail from the 1946 London Bus Map)  A decisive sense of being firmly plugged into the city’s transport network strongly enhances local identity.  Compared with 1936 the residential hinterland around Crystal Palace has a very different population mix drawn from a wide variety of ethnic groups and the local sense of identity will continue to evolve with new generations.  But it’s unlikely its illustrious past will be forgotten any time soon. 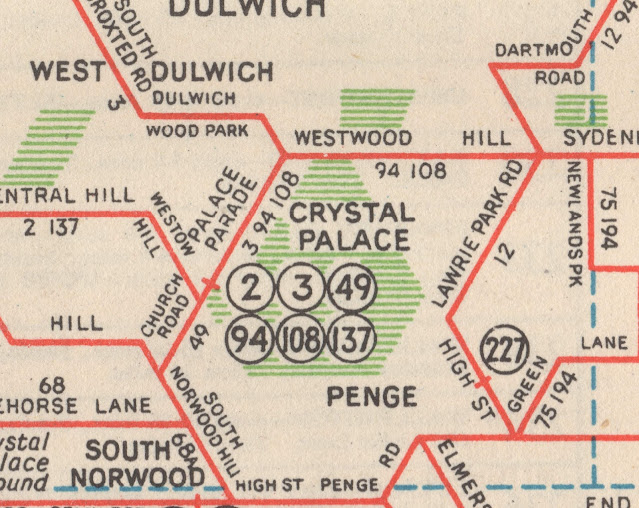 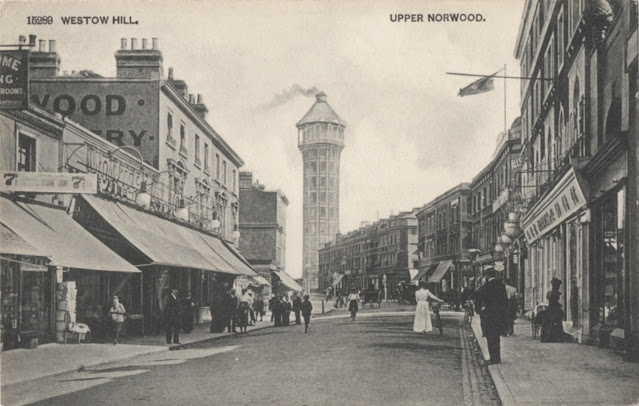 Finally there’s the colonial context to consider. The second half of the 19th. century was an especially bellicose period for British forces, regular and irregular. There was an astonishing  succession of what the Victorians called “small wars” or “punitive expeditions” and would now be described as “regional conflicts”.  (Follow this link to see a comprehensive list) Slavery was, formally at least, a thing of the past and the new colonial model was a programme of ruthless economic extraction of minerals and produce, mainly carried out by private interests, often with their own militias and government troops to fall back on. Alongside this went a great expansion in the evangelical activities of Christian missionaries, strenuously promoting the myth of the dark, savage and heathen continents, occupied by cannibals and headhunters in desperate need of the gift of Christian civilisation, never imagining that destroying centuries of religious and cultural practice would meet with any resistance.  This was the cradle of the pseudo-science of racial hierarchies and the cod philosophy of white supremacy.  The notion of the “White man’s burden” was conjured into existence, as if the imperial project was an exercise in philanthropy. Britain derived an enormous economic advantage from its global access to cheap raw materials, placing the nation at the forefront of technological innovation - the very thing the Crystal Palace was built to showcase to the world. The British public was happy to accept this version of imperial power and global domination as a mission to civilise and educate those whose greatest misfortune was not to be born British and many events at the Crystal Palace were designed to cater to this sense of national pride. Notable among them were the 1896 African Exhibition, the 1905 Colonial and Indian Exhibition and the 1911 Festival of Empire.  Previous posts relating to the Crystal Palace locality can be seen by following these links - Charleville Circus, Cox’s Walk and the Dinosaurs.