Postcard of the Day No. 109, Orphaned Postcards 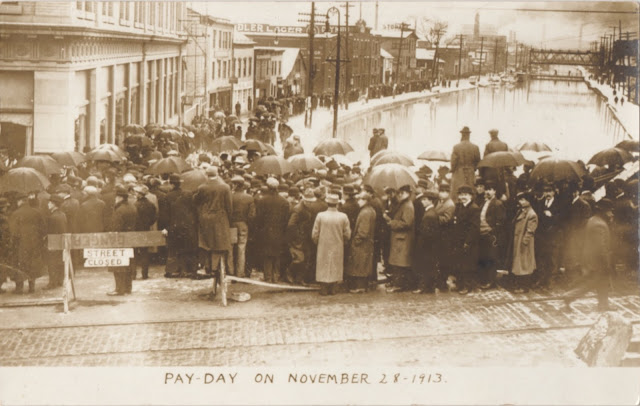 If a brand character can be orphaned (as we noted in our last post) the same fate can befall the humble postcard. Careless publishers will often supply inadequate captions or omit them altogether. When this happens some clues can often be obtained from the postmark or publisher’s details on the reverse side. But if the publisher is anonymous and the card has avoided the postal system, we have an orphaned card of an unidentifiable scene.  A nice example is the card above in which a small army of workers shuffle towards their wage packets. This much we know from the caption (which even includes the precise date) but we can only guess at the location.  It looks like a broad canal basin in an American industrial town or city - it could be anywhere between New Jersey and Illinois with Chicago, because of its size, the most likely.  If the camera position had been slightly to the right it would have revealed the full name of the lager advertised in the distance which may have been helpful. None of this uncertainty detracts from the visual drama of a stoical workforce forming a comradely line in drenching rain as they inch their way towards the fruits of their labours.

A pleasing distraction when fumbling through boxes of cards at a postcard fair is overhearing the requests from fellow collectors.  Most have only a single town, village or settlement in their sights - “Any Brixham, Polkerris, Sidmouth, Ipplepen, Liskeard, St. Columb Major?” they bark and if the answer is negative, move on without a word.  Others have based their collections on more obscure areas of human experience and in voices tinged with resignation in anticipation of failure, will ask for anything on dentistry, card games, road works, dog fights, perfumes, shoe making, buildings under construction, clairvoyants, et al.  Of all such requests, the most impressive came from somebody who asked for any unknown or unidentified scenes and even more impressively the dealer handed over a shoebox full of examples to the collector’s great delight.  It seems this is a thing - some value these orphans for their sense of mystery while others turn detective to resolve the mystery. 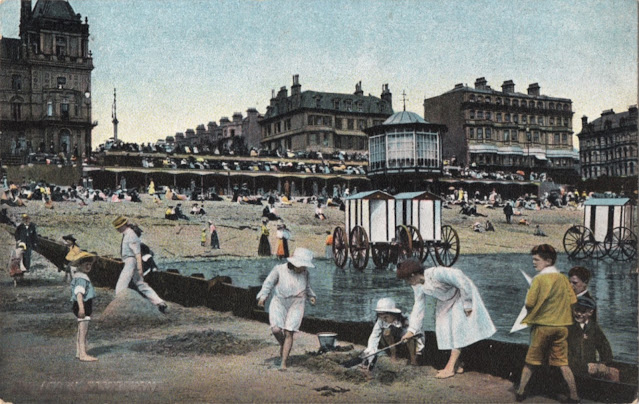 Above is another orphaned example - on this occasion the caption is obscured by careless overprinting.  An abundance of sand ruled out Brighton and it didn’t look much like either Blackpool, Scarborough or Bournemouth. By squinting at the caption from a variety of angles I just about convinced myself the second word was Eastbourne.  Checking with other cards showing the same glazed pavilion from a different angle on the esplanade soon confirmed that it was. It’s an interesting card because of its informality and animation. What lets it down are gloomy colour values and a general lack of detail. French contemporary publishers, such as Louis Levy (LL), would have done a much better job with their superior print definition. 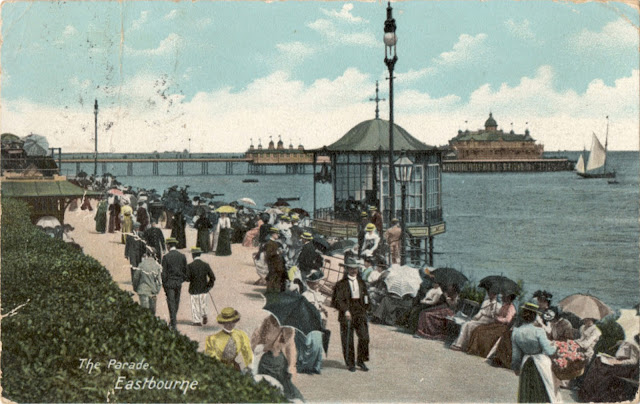