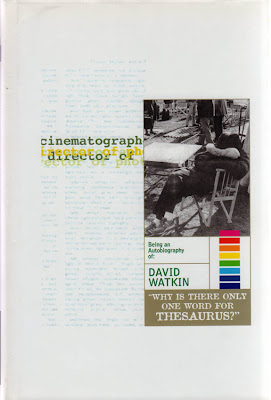 This must come as a shock to those of you who did not know of the severity of his illness, or were unaware of the speed of his decline in health.

Those of us with him during the last days knew with what courage and fighting determination he confronted the inevitability of his cancer. His spirit, wicked humour, and relish for life were with him to the end, undiminished as he lost control of his body. Everything above the neck is wonderful, he would say, everything beneath, a nightmare. The hearing is the last of the senses to be surrendered, and he listened at the last to Mozart piano sonatas and Richard Strauss.

Readers of his two printed memoirs will know the rich fabric of his life, the complex paradoxes of a man of complicated responses who always laid claim to the simplest of answers and propositions in dealing with life and the Film Industry. Friends will know how these paradoxes played out in conversations, negotiations, dealings and an infinite number of kindnesses, small and large, thoughtful and epic.

Students and visitors expecting a master-class in cinematography, and suggestions for successful film-making, were treated instead to Bruckner, Wodehouse and Dr. Johnson in the pursuit of the incisive, emotional drive and economies of effort. Despite himself, he consistently inspired and provoked, and was never forgotten by those who encountered him, students, fellow professionals, and even passing literati in the delicatessen.

In the days to come, just tributes from his peers will record the technical and aesthetic achievements of this remarkable man, his beginnings in the British Documentary Movement, early pioneering TV commercials and the shooting of his first feature films. His career developed in the British Film Industry but also in Hollywood, providing a broad cultural perspective of two different types of cine-madness. Mention will be made of his innovations in lighting, and the Wendy Light. A keen sense of the absurd, tempered with a steely determination to get it right, saw his rise to a pinnacle of achievement he would never allow others to articulate and frequently dismiss as hyperbole. When asked for a motto to embellish the tee-shirts of the International Film Festival of the Art of Cinematography at Lodz, where he received the Lifetime Achievement Award in 2004, he refused the usual gusty wisdom in favour of “One tries not to fuck it up”.

His two autobiographies Thesaurus and Clara are both woven through with ample evidence of the source of his creativity in a love of people, and a cultivation of friendship. A new film was the opportunity of getting his Crew back together, a band of kindred spirits, a breed of Merry Men united in their professionalism and love of one-liners. He had heroes – Tony Richardson, Peter Sellers, Peter Brooks and many others who were often given a chapter to themselves, a reward for their energy, and a shared hunger for taking risks.

Weeks before his death, copies of his Second Autobiography, Was Clara Schumann a Fag Hag?, arrived from the printers, to his great satisfaction.

He concludes the Vale Chapter, “Above all, I am surrounded by love, and its little brother laughter, and I am happy. I don’t even have a problem with death. Pain is at an end, and we, who love, and are loved are always part of each other’s lives.”

Chris was, in David’s words, impresario to the two autobiographical volumes that he produced in his last decade. Through Chris I met David on a handful of occasions on visits to Brighton. He was marvellous company, ever courteous with a talent for hugely entertaining conversation that switched in an instant between beautifully modulated subtlety of expression and scandalous profanity and back again. His complete lack of pretension, his unreconstructed passion for socialism, his loathing of Tony Blair and New Labour, his refusal to take himself seriously and a wonderful sense of humour were absolutely irresistible. Plus a schoolboy enthusiasm for trains and transport that he never lost. Inexhaustibly curious about all aspects of the arts, he went entirely his own way in following his passions without regard for either fashion or orthodoxy. An admirably idiosyncratic and talented personality who will always be recalled with fondness and great esteem.

To read the Guardian obituary, follow this link.
Posted by Phil Beard at Sunday, February 24, 2008