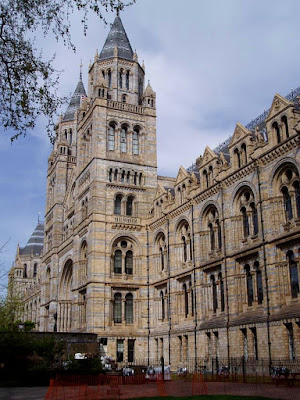 A short walk through Albertopolis from South Kensington station to Hyde Park remains one of London’s more diverting attractions. The concentration of institutions devoted to conservation, scholarship and learning is unique in the city and the highest ideals of the Victorian era have shaped the buildings and infrastructure. Albertopolis has a lineage that goes back to the Great Exhibition of 1851 being constructed on land that was acquired with the proceeds of the exhibition. there is even a concealed alignment linking the central portal of the Natural History Museum with the Albert Memorial almost half a mile to the north in Hyde Park. 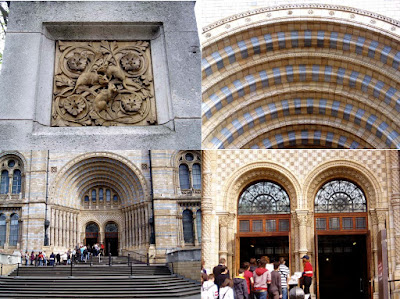 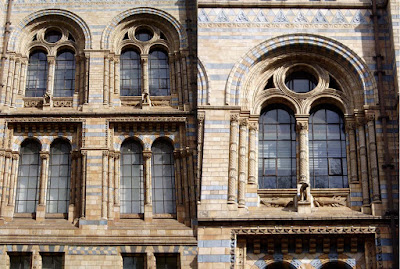 Alfred Waterhouse’s terracotta clad Natural History Museum is the finest and most distinctive of all the great institutional buildings with a wealth of architectural ornament and an abundance of modelled and moulded representations of the natural world. Like most great Victorian structures, it offers two levels of interpretation, the first being mass, volume and profile – the big picture, and secondly, the surface detail, the application of ornament on such a vast scale that the building can literally be read from start to finish like a work of reference. Even the presence of numerous coachloads of visitors cannot detract from the pleasure of a leisurely inspection of the elevations; the scale of the building and the generosity of its plot can effortlessly minimise their impact. 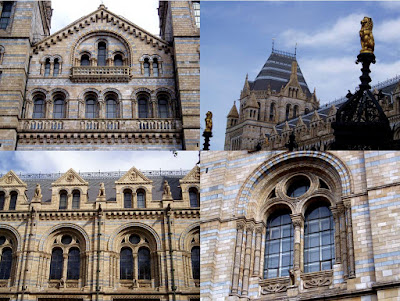 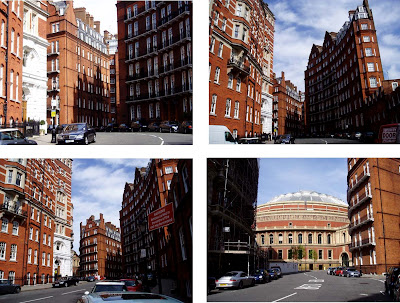 Many of Waterhouse’s drawings for decorative features have survived and form the subject of a published study by Colin Cunningham, “The Terracotta Designs of Alfred Waterhouse”. Remarkably, Waterhouse’s designs are to be found not only in the prominent areas of the building on corbels and capitals, parapets, arches and columns but in many of the least visible areas such as air-bricks and soffits. An enormous menagerie of living creatures memorialised in clay and embedded in meshes of natural forms from the world of plants is scattered across every surface. Repetition of geometric forms and the use of poly-chromed clay and brickwork add to the effect. Virtually no aspect of the building is ornament-free and the result is spectacular but indigestible. This is architecture as narrative, where the function of the building dictates an all-embracing decorative scheme of mind-bending complexity. 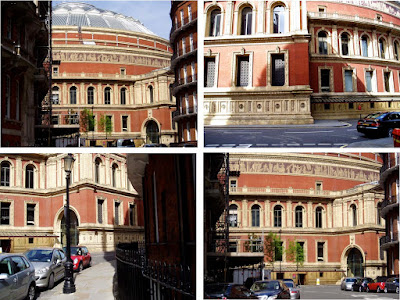 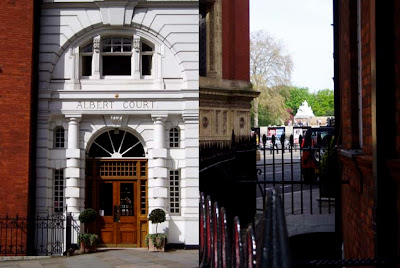 For me, the second highlight of Albertopolis is the spectacular street scene created by Richard Norman Shaw’s Albert Mansions apartment blocks of 1879 to 1886. These predominantly red brick structures of 8 or 9 storeys are at their most impressive where their facades curve to partially encircle the Albert Hall. The sense of verticality is unusual for London where the horizontal more often prevails and the eerie silence of the almost deserted streets offers an experience rarely enjoyed in such a hyper-active and noisy city. The gables, balconies and sash windows all contribute to the sense of quality. Glimpses of the Albert Hall serve as reminders of the Victorian passion for narrative facades. Terracotta inscriptions enfold the building in a typically Victorian blend of piety of expression and assertion of imperial power. The final image below is of the Albert Memorial reflected in the glazing of the Albert Hall. 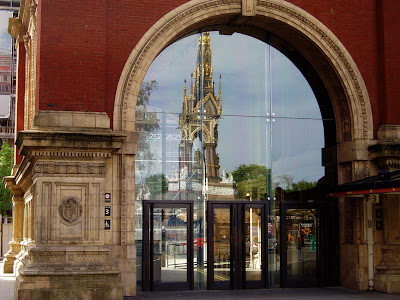 A wonderfully nostalgic photo experience as I spent a lot of time in the area when I was in my twenties living and loving.

Thanks for your comment Rob. Revisiting after several decades, places that were very familiar, can be a disconcerting experience especially when faced with the unreliability of memory. That said, my recollection of the Albert Mansions is one of gaunt, forbidding accommodation blocks, dated in appearance and not particularly well maintained. They now look dignified rather than forbidding and timelessly well proportioned rather than dated. Decades of grime have been scrubbed and blasted off the brickwork and revealed the clarity and distinctiveness of the design. Renovation and restoration have successfully rehabilitated this entire district from the Natural History Museum to the Albert Memorial.