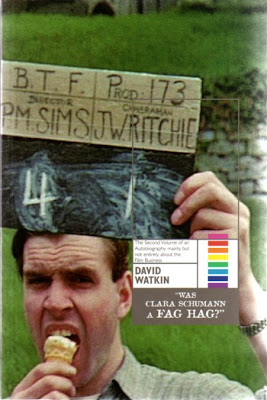 Since his death in February, I have been reading the second volume of David Watkin’s autobiography which goes by the chirpy title, “Was Clara Schumann a Fag Hag?” This was his last labour of love, the printed copies being delivered only weeks before his death. The book has an episodic structure and the opening chapters on the early years and the entry into film-making are substantially the same as the material in volume one, the similarly interrogative, “Why is there only one word for Thesaurus?” As such, it tends to read as an expanded version of its predecessor although it’s none the worse for that.

The pleasure in reading this book is to hear again the author’s voice as he relates his vast fund of scandalous and wickedly funny anecdotes. Apparently born with an instinct to constantly go against the grain, his descriptions of growing up in a prosperous, boring and sober minded family are especially amusing. As a child, the offer to give up attending church for Lent could hardly be better devised to offend the Catholic sensibility of his parents. There is a disarming sense of modesty in the refusal to inflate his cinematic achievements or to paint himself in a flattering light.

He was proud of his ability to sleep soundly through the frenzied activity of a film set and we are quickly convinced that arrogance played no part in this practice despite the notoriety it brought him. He explains it as simply a practical way of arranging his time and conserving resources. In a way, it is emblematic of a certain kind of Englishness that seems to be on the verge of extinction in which an apparent air of utter nonchalance conceals an intense drive for perfectionism. Perhaps it develops from the notion that to display the serious minded demeanour popularly associated with high professional standards is no more than an exercise in bad manners or, even worse, a device for the concealment of mediocrity.

His inventive approach to cinematography and his unorthodox innovations already have their place in the history of cinema. What this book achieves is something he held to be of even greater importance, it seals his achievement of a rich and full life, consistently lived well and always with great good humour and relish for the absurd. For more on David Watkin, please visit www.davidwatkin.co.uk/
Posted by Phil Beard at Thursday, April 17, 2008