Postcard of the Day No. 30, Gotthard Express 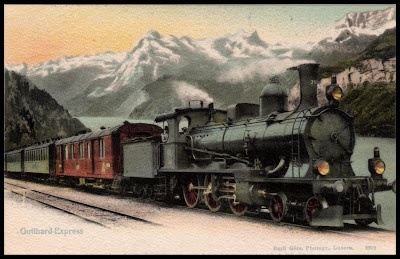 The Alpine snowfields have been defined by the delicate application of watercolour. The same precision has been applied to describe the forested slopes of the foothills. The locomotive appears timeless, frozen and monumental. The complexities of the pipe work and valve gear are revealed in all their detail and the boiler casing gleams in the soft light. A column of steam escapes from the safety valve into the chill penumbral air as the train eases to a standstill. The driver’s watchful eyes are shaded by the brim of his hat. The clarity of physical detail is surrounded by an envelope of almost infinite atmospheric softness. A century has passed since the passage of this train was recorded. The passengers are long since deceased but the mythology of the train endures as the dispassionate conveyor of equal parts of misery and pleasure. The joys and excitement of travel and the wretchedness of forced migration coexist in the collective narrative of rail transport. Dreams of freedom and adventure entwined with the nightmares of dislocation and extinction. 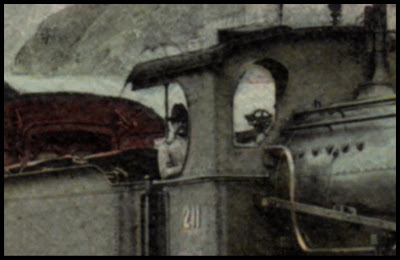