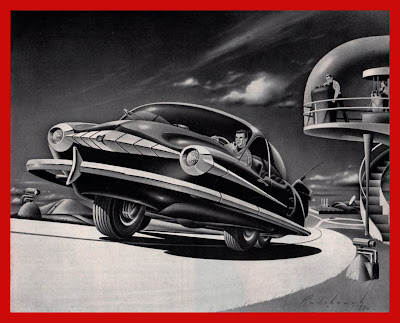 The atomic car is not yet a reality but Arthur Radebaugh (1906 – 1974) was ready, willing and able to envisage this unlikely radioactive beast and pilot it full tilt into the future. He was a Detroit based illustrator who specialised in automotive advertising and wildly imaginative scenes of futuristic technological utopias. His finest achievement was a long series of full-page colour illustrations for the Bohn Aluminum and Brass Corporation of Detroit that ran for years in Fortune magazine in the 1940s. Our old friends at Visual Telling of Stories (VTS) have a generous selection of these wonderful visions on display. It was a world where monorails, flying cars and torpedo-shaped ocean liners fought the elements to conquer time and space. The charm resides in the ingenuity with which the Art Deco/Science Fiction flamboyance of the period is projected forward into an unrealised future. There is evidence to suggest that Radebaugh himself already inhabited the future he was busy imagining for the rest of us. Cartype has images of a 1959 Ford Econoline van that he had customised into a mobile studio complete with futuristic styling. There’s a photo where he peers gnomishly through the door of his van, composing himself for another heroic voyage into a spectacular future. 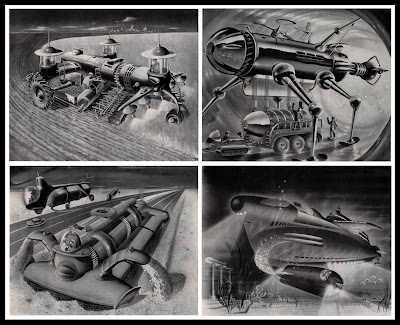 In the early Forties he painted four covers for the Saturday Evening Post employing distinctly restrained imagery but later in the decade he gave his imagination full rein when working for Bohn. In the Fifties he did another extended series, this time for National Motor Bearing Co. in which squadrons of insect-like robotic vehicles and atomic cars with cockroach styling dominated the vision. Monochrome and dark in tone, a flavour of film noir floats in the air with just a hint that the future may not be one of undiluted bliss. VTS has a fine selection. 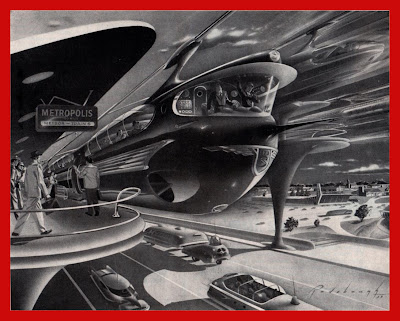 In 1948 he joined the distinguished company of artists invited to advertise Coca Cola. The intimidating image of a gargantuan dispenser of Coke dominates the scene and foreshadows the grip that mega-brands will come to exert on the global consumer. This is one vision of the future in which we have all become trapped. The proletarian associations (Inviting workers everywhere) seem anachronistic but the glamour of the world of entertainment remains part of the vocabulary of contemporary advertising. The drama of rain swept city streets and infinite industrial sprawl is very much the product of the unique vision of Arthur Radebaugh. 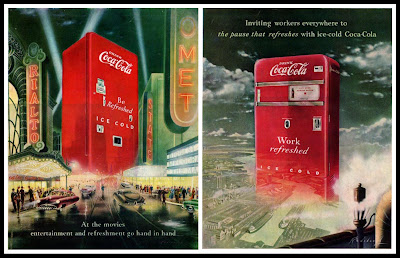